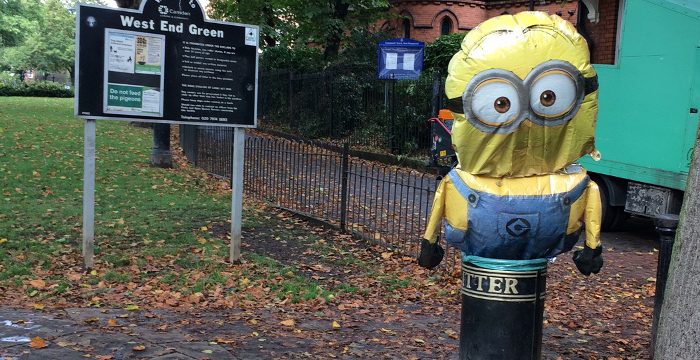 As part of National Poetry Day on Thursday, local poet Ted Booth wrote a poem about freedom dedicated to Nazanin Zaghari-Ratcliffe. The West Hampstead mum was denied parole from her Iranian jail this week. Her husband Richard read the poem outside the Iranian embassy and 1,000 copies were given out in West Hampstead.

Tom’s been out and about, eating Italian at Nona in Fairhazel Gardens. How did he find it?

Make a note – Mill Lane will be resurfaced (and closed in sections) from Sat 21st Oct to Sat 28th.

And here are the top twelve things to do in (and around West Hampstead) in October. 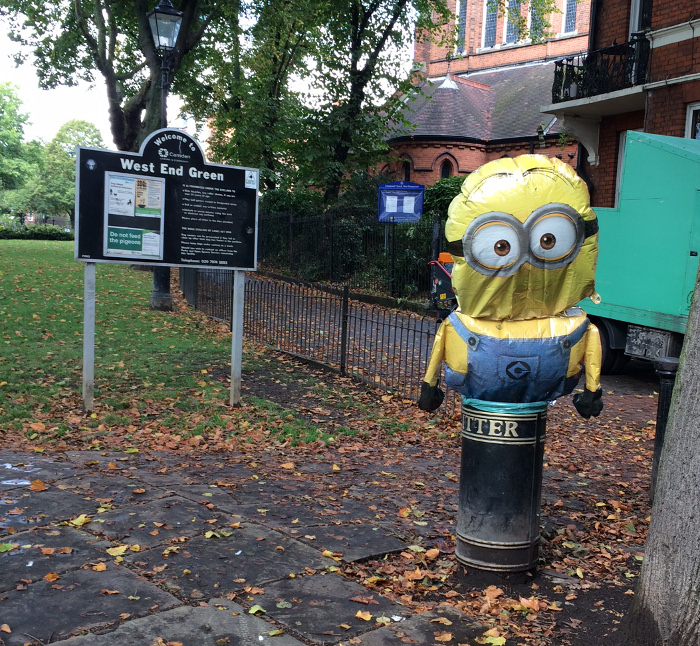 Putting your litter in the bin is anything but #despicable in West Hampstead. Image: Marianne Jones

The police are appealing for witnesses to the hold up at the Sherriff Centre, apparently the perpertators were three men dressed in black on mopeds.

The police have also been warning of phones being snatched by moped thieves by the tube station. Be aware. [Ed – reports of another mobile being stolen at the Thameslink last night].

Politics (Lab) – Tulip continues to battle against a hard Brexit.

There was a very good piece on understanding the World Transformed (i.e. Momentum).

And some cross-party consensus … on chocolate biscuits!

This week saw a (sad) farewell to Paul Perkins who ran the Winch youth centre for nine years (previously there had been seven directors in as many years). The Winch provides after-school clubs and activities for young people. It is a charity WHL has long supported.

And sticking to the architectural theme there was this rather cool historical map of NW London, showing West Hampstead (or West End as was then) in …. 1790!

West Hampstead resident Ben Corrigan appeared earlier this season on Dragon’s Den with as part of a team of three pitching Pouch (an online voucher wallet). The dragons liked the pitch as all five made offers.

Twelve Things to do in West Hampstead in October