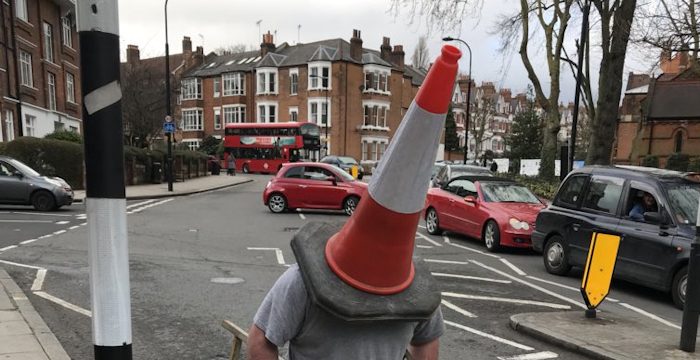 Oh no! Water leak season has started again. A series of leaks affected a wide area and many houses were left without water.

It’s less that two months until local elections, but the Conservatives are apparently asking you to vote for a question mark. Just a typo we were told. The missing candidate is actually Sedef Akademir. 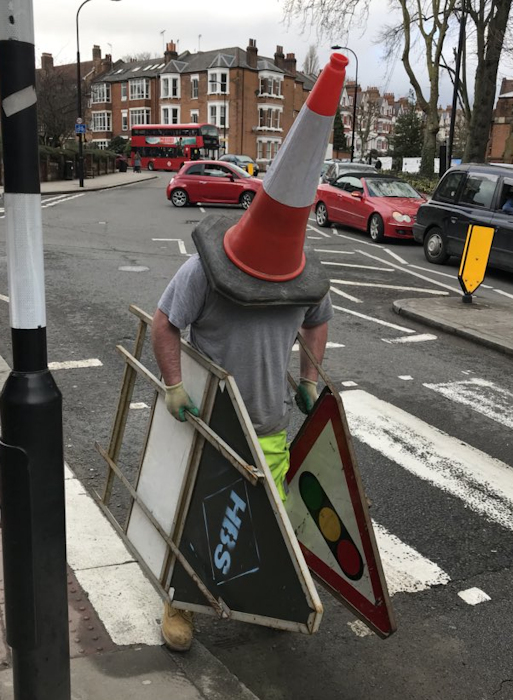 “Can’t possibly carry all that guv…” Photo via Ian Cohen

Our historians reported on a real life ‘Death in Paradise’. Actor and sometime West Hampstead resident, George Rose was murdered in the Caribbean in the 1980s.

It was gridlock on West End Lane due to two sets of temporary traffic lights. The theme of local campaign group WHAT’s AGM next week is appropriately: Roadblocks and Diversions!

There are at least two huge metal ‘clothes banks’ in West Hampstead that are not charity boxes and appear to have been illegally placed there some time ago. They’re at least half a tonne each. Did no-one at the council spot this?

We have a good samaritan among us. A mystery man paid for the groceries of an older man at Sainsbury’s who had come out without any money. The older chap’s wife is very thankful.

Do you recognise this flowery handbag? It has an empty purse inside. It was dumped outside someone’s house but we are trying to reunite it with its owner. Or do you recognise an abandoned hold-all, which contained a quantity of cash, and was left outside the tube station.

There was a burglary on Iverson Road. Police advice is to make sure doors and windows are locked but maybe time for a webcam?

The Priory Tavern on Belsize Road has changed hands.

And while we are down that end of the KHR, here’s a trip down memory lane.

This Wednesday sees the next Sheriff Concert series. The moving force behind them, pianist Yehuda Inbar (we’ve heard he’s good) and violinist Timothy Redout, are playing ‘the Romantic Influence’ (you know – Schubert, Schumman, Brahms and beyond)

It is coming up for TWO years since Nazanin Zaghari-Ratcliffe was put in Tehran’s notorious Evin prison. To mark this, and to mark her second Mother’s Day in jail, there are a series of events coming up: a performance of ‘Looking for Mummy’ at JW3 (if you haven’t seen it is very moving), a comedy fundraiser hosted by Shappi Korsandi (sadly sold out), paint a pebble for Mother’s day and an event on Fortune Green.

Good Luck to Jess Curtis, a West Hampstead teenager, who is off trekking to Everest base camp. She’s raising money for a charity that helped her brother, James, who was born profoundly deaf but now able to hear. You can support her here.