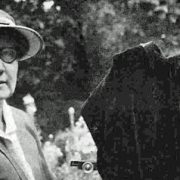 “For fifty or even sixty years, Miss Compton Collier, based at West End Lane, Hampstead, has toured the English countryside. With her haversack of heavy photographic equipment, wooden camera and tripod she has stalked the great English families in their lairs.” – Cecil Beaton.

In The Tatler magazine from 1916 to 1948, photographs regularly appeared by ‘Miss Compton Collier, West End Lane’. The earlier pictures were of popular actresses, and then from 1920 onwards they were of society celebrities in their houses and gardens. At the time, she was one of the few woman photographers.

Dorothy Marguerite Cuisset Collier was born on 24 January 1899 at 1 Goulton Road Clapton, near Hackney Downs. She was the only child of Edward Allen Collier who was a distillery manager. By 1911 the family had moved to 28 Victoria Mansions in Willesden.

In November 1919, at St Augustine’s Church in Kilburn, Dorothy married John Davis, a 35-year-old business manager who lived at 22 Kilburn Park Road. She had left home and was living at 115 West End Lane. The witnesses at the wedding were Owen Nares and his wife Marie Pollini, both very popular actors. For most of the 1920s, Nares was Britain’s favourite matinée idol and silent-film star. Dorothy had befriended them during her work for The Tatler, and her photo of them appeared in 1918. 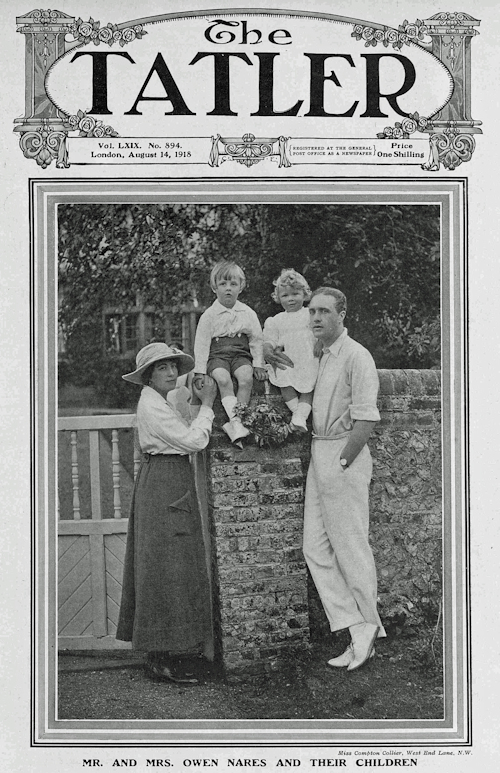 In 1922 Dorothy and John moved just six doors down to 103 West End Lane. Dorothy continued to use the professional name she had created of ‘Miss Compton Collier’. Sadly by 1931, their marriage failed and the couple divorced.

In 1966, renowned photographer Cecil Beaton wrote an article called, ‘The Woman who made me want to be a photographer’. This provides the best insight into Miss Compton Collier, and how her pictures influenced the young Beaton:

Many of my adolescent glimpses of the grand world came through the photographs in The Tatler which bore the credit line ‘Miss Compton Collier’. They invariably showed us delightfully fair-haired ladies caught in a silvery light enjoying, in a leisurely manner, the herbaceous borders, clipped yews, stone garden seats and sundials of their country houses. Pouring over these reproductions week after week I came to know Miss Compton Collier’s taste extremely well. 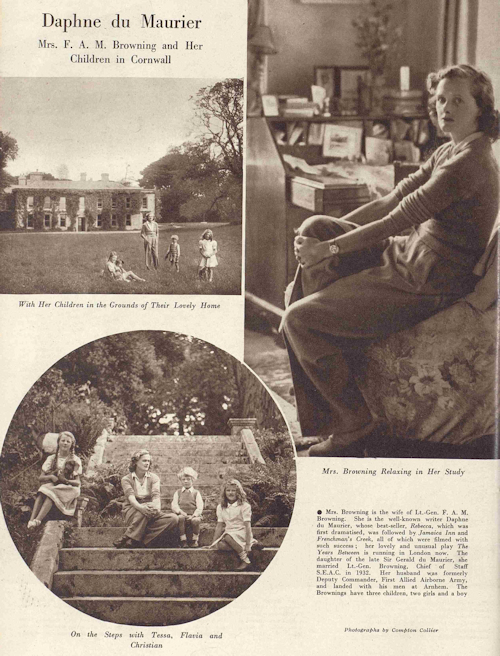 Wherever possible she chose to photograph her subject standing on a piece of flagged path… Balustrades, terraced steps and rustic bridges were also other favourite haunts. Occasionally Miss Compton Collier would sprinkle a successful actress or two among her aristocratic sitters, but these too, would be photographed as far as possible from the atmosphere of the theatre and would be found on holiday, leaning against a gate surrounded by cow parsley, or holding a sheaf of corn in some stable yard. In fact, my earliest family snapshots were mostly made in emulation of Miss Compton Collier…Trying to appear the Ladies and Honourables, or stage stars ‘on holiday’, my wretched schoolgirl sisters would then be made to pose by garden urns or sundials, or among the Japanese anemones and harebells. But, try as I might, my sepia prints, brought from the wash basin of hypo, never acquired the silverpoint effect of the original inspiration.

Other photographs that appeared in The Tatler were attributed to ‘Rita Martin’ and ‘Lallie Charles’ and ‘Basano’, so why, I wondered, should it be ‘Miss Compton Collier’. Who was this lady? I was intrigued to discover her whereabouts but I knew of no one who had ever met her, and her name was not listed in the telephone book.

It was many years after Miss Compton Collier’s photographs had ceased to appear that I heard that she had continued her career with unimpaired zest, and each spring would send to people of high rank an itinerary of her summer tour stating that she would be in the neighbourhood during a certain week in case she were needed for an ‘at home’ sitting. I was intrigued to know that this mysterious lady still existed, so I wrote to ask if she would deign to include me professionally in her schedule and take some pictures of my mother and myself in the garden at Broadchalke. Miss Compton Collier graciously announced her willingness to oblige me. [Ed: this was in 1955]. 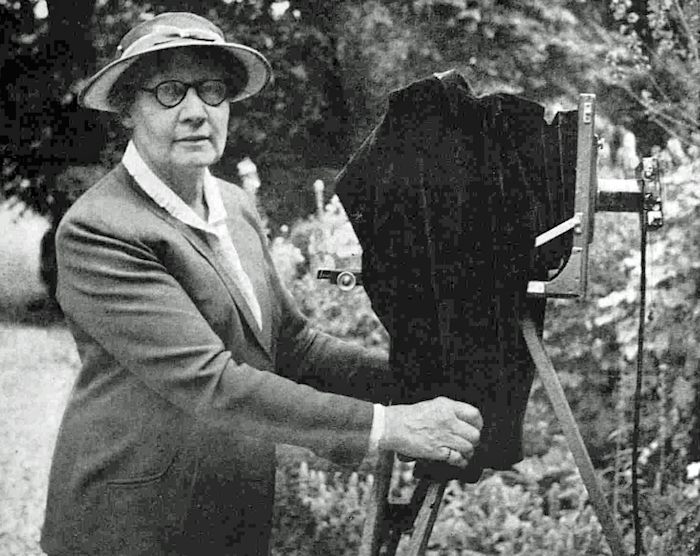 Miss Compton Collier proved to be an extremely agile spinster of over seventy with a pale brown face of minor distinctiveness with the flesh solid and shiny. She was dressed in old-fashioned clothes, somewhat like a land girl of the 1914 war, with large felt hat and flowing skirts. She projected a personality that brooked no nonsense, and no interruption; her main objective was to seek out the nearest flagged path and the most lichen-mottled stone garden ornaments. A slightly forced giggle was part of her stock-in-trade. This softened any of her criticisms and enabled her to make all sorts of observations that, without it, might have caused offence; it was certainly not a giggle from the heart. I felt that Miss Compton Collier did not approve of the decoration of my house; she was only interested, and that for utilitarian reasons, in the bathroom, and the quicker outside the better.

Miss Compton Collier is extremely knowledgeable about gardens: ‘After all, I have photographed eleven thousand of them!’ She knows her England well: ‘Dorset has the best little manor houses. Oxford is where the nouveaux riches live in gardens planned by Sutton’s. That thatched wall is typical of Wiltshire; we must take it quickly – but, oh dear – the horrid sun is coming out! I hate the hard light it gives. Such a bad week last month – sun every day! I loved the summer before rain all the time! People can’t believe it when I photograph them in a downpour. But I say: “I’ll give you your money back if you don’t like it!” Recently in Scotland she had placed a whole tribal family in the garden under umbrellas, and at a given moment ordered the gillies to rush up to take away the umbrellas while the exposure was made.

Miss Compton Collier took pictures of my mother and myself obediently sitting on an old stone seat with the dog at our feet. Behind the camera her performance was dynamic – even acrobatic. In order to stimulate the interest of her subjects she would jump up and down, wave an arm, squeak a rubber dog, and hum in a high musical voice. Suddenly, with a heavy click, the shutters of the lens would open and close. ‘Got it!’ shouted Miss Compton Collier in triumph. Her face was now a matter-of-fact, rather sullen mask. The switch from such inspired enthusiasm to the merely businesslike was somewhat of a shock.

At lunch she told us that for many a donkey’s lifetime now she has lived in a small house in West End Lane, Hampstead, tended by an old servant of seventy-six. Miss Compton Collier appears so strong and healthy that one knows it is true that when she goes to bed it is to sleep so soundly that nothing will disturb her: – not even a bomb. In fact in one raid when the roof was blown off the house and all her rooms but two were destroyed, Miss Compton Collier went on snoring. [Ed: this was the V1 that hit West End Lane in June 1944].

‘Every day of my summer is taken up with work; from April to October I’m busy, so I leave everything else that has to be done to my winter months. I only do shopping in January: if a cup gets broken it has to wait till the first of the year. But I hate shopping in any case – it bores me. Now these clothes I’m wearing were bought fifteen years ago. I never read the papers: they’re so vulgar. I’ve never listened to the radio; I hear everything I want to hear. And I wouldn’t dream of doing the usual things like filling in a census or having a ration book. I just haven’t time. I hardly ever go to a play, but when I do I ring up and find out first if it’s got a nice happy ending because I hate all these squalid dramas that are so much the fashion. I loathe magazines and won’t contribute to them any more now that they’re full of Communist propaganda. I’ve never worked for the Press; if, in the old days, my pictures were used in The Tatler, it was I who chose the people to photograph: I never took people especially for the paper.’

How did you become a photographer?’ I asked. ‘I had a weak heart at school and wasn’t allowed to play games. Someone gave me a camera and I suppose that the artistic feelings, always in my family, came out in my generation in this different way. In another century I would have been a painter.’ 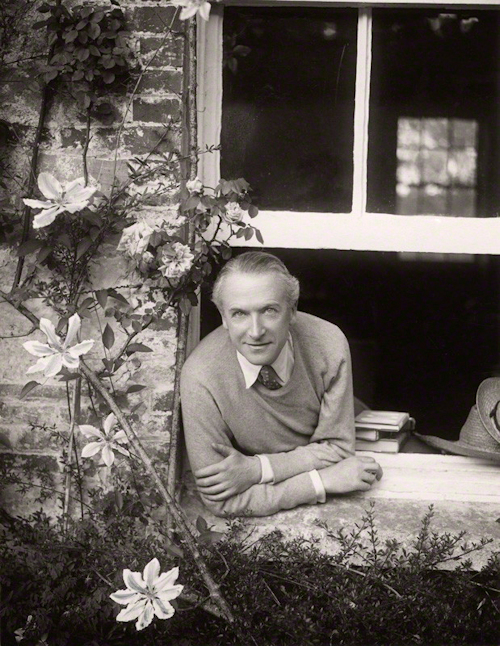 Miss Compton Collier does most of her own photographic processing, and said she was up till three o’clock last night developing plates. All her paraphernalia is entirely obsolescent. She climbs under a dark red velvet cloth attached to her wooden 1895 camera with its long rubber tube with ball-shutter release. Hanging from the wooden tripod is a large bag containing a menagerie of toy dogs, mice and other pets to attract the attention of her aristocratic children and animal sitters. Miss Compton Collier has never visited a photographic exhibition, and shows complete ignorance of the work of other photographers. She had never heard of the work of Steichen, Bill Brandt or Cartier-Bresson. Although she has no further ambitions, she is never bored with her work; each sitting is a thrill for her.

In the silvery prints that resulted from her visit to Broadchalke both my mother and I appeared calm and leisurely, our faces smoothed and our hair silken. We were not only amused, but delighted.

Miss Compton Collier lived in her own closed world with little regard for current events. She took no newspapers; did not own a radio and did not watch television; she relied entirely for news of the world on her Kilburn bank manager. Her bank manager, not unreasonably, said: ‘I shall need some guidance, Miss Collier. If I am to provide you with news of the world, could you give me examples of what you mean?’ ‘Oh, yes’, she said, ‘it is perfectly simple. I mean the death of the sovereign or the outbreak of war’. 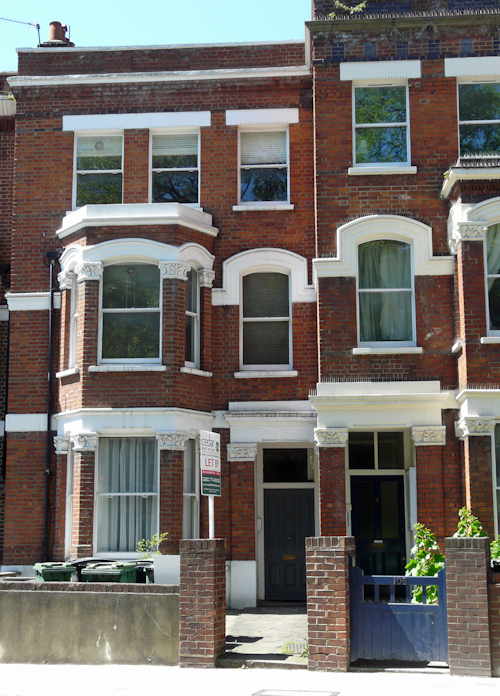