Former Czech president Václav Havel smiled down at us from the wall. How could we fail to fall in love with the food and flock wallpaper?

We were guided through to the high-ceilinged dining room because we were interrupting the Czech sitcom on TV in the bar, or at risk of waking the guy slumped on the sofa. “It’s a bit like being in an old-fashioned hotel by the sea,” said Helen to nods of agreement. Sarah nodded too, but it was harder to see because she was standing up. Having lost the original reservation, the restaurant still managed to lay the table for only 7 rather than 8. Chairs were found, order was restored, beer was drunk.
The fin-de-siècle atmosphere of the parlour was heightened by the glamorous guests at the private party in the room next door whose beautiful dresses, elegant gloves and sharp tuxedos occasionally tumbled into the lobby. Bilingual conversations floated in to the restaurant, which was far more segregated between our raucous English chatter and the quiet Czech discussions at tables around us. 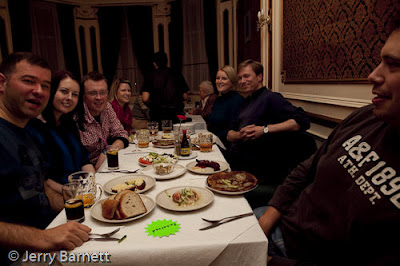 A selection of starters appeared; insipid against the dark velvet of the walls, except for the Utopenec – a crimson mutant sausage designed to warn adolescent boys of the dangers of getting too close to the reactor. The Šopsky salad went down well, as did the potato pancake, which tasted much better than it looked. The avocado salad sadly looked more appetizing than it tasted – an avocado that requires a steak knife is never a treat.
Try as we might we just couldn’t polish off the last piece of fried bread topped with crumbled cheddar and the waiter punished us by leaving it on the table forlornly for the rest of the meal. Main courses arrived, ticking all the boxes in the I-Spy Book of Mitteleurope cuisine. There was goulash, there were schnitzels, there was wild boar, there was goose, there was sauerkraut, there were dumplings and there was Quorn. Yes. Quorn. In schnitzel form. More than that it was a Quorn “Club” Schnitzel, which meant it was liberally covered with – wait for it – crumbled cheddar. For real. Is this really traditional or did they just massively overorder the cheese this week? 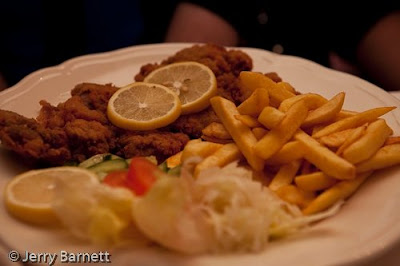 Mark claimed his goose was “ethnically authentic” although his credentials for judging remained murky. If my goose was ethnically authentic, then I feel sorry for the Czechs. It was inedible. The meat was not so much dry as arid, while the sauerkraut had been lost in translation as it was horribly sweet. Dom manfully fought his way through a chicken club schnitzel – cheddar and all. Lisa said her Wiener schnitzel wasn’t as good as ones she’d had in Vienna (perhaps unsurprisingly). Matt barely touched his goulash, which “tasted like a school beef curry but, y’know, not spicy”. Helen declared the Quorn club schnitzel “excellent”, albeit with a deadpan expression that begged the question. Sarah’s chicken club schnitzel was “guilty pleasure comfort food”. Jerry’s wild boar and cream sauce had looked the best dish on the table and, based on his big smile and clean plate, it was clear what everyone would order should there ever be a return visit.
The bill (cash only) came to £153 for 8, service not included. Despite some disappointing food, the overall atmosphere was appealing in a mildly kitsch and unintentionally ironic sort of way. Quite what Václav would make of it I’m not sure – if he really liked crumbled cheddar then he’d probably love it, maybe write a play about it and thus cement its place in history. Which would be fitting, as the place feels far more rooted in the past than as a part of London’s contemporary multicultural cuisine. 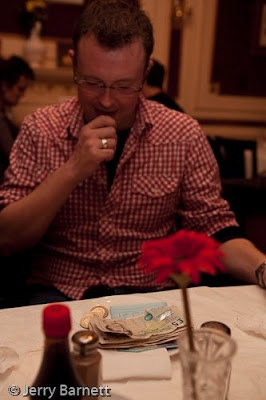 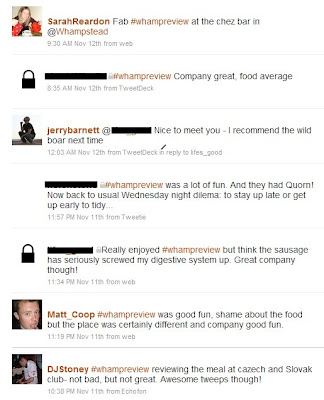 (all photos courtesy of Jerry Barnett)