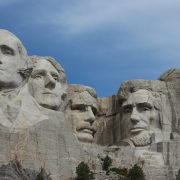 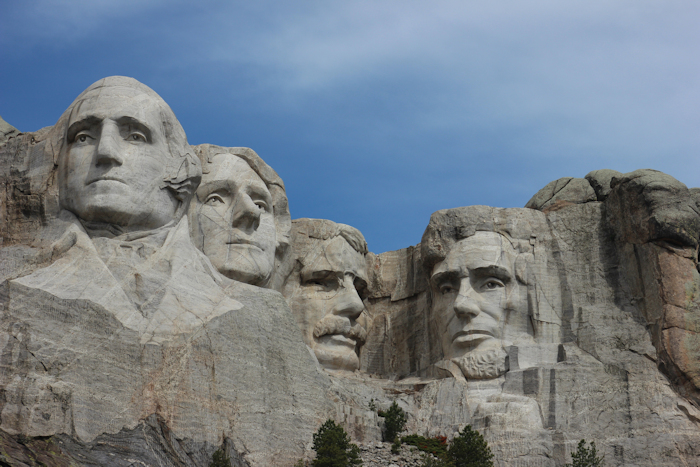 It’s Thanksgiving in America, so what better time to dig into the link between Kilburn and the man behind one of the most iconic landmarks in the US.

American artist and sculptor Gutzon Borglum lived and worked at Harlestone Villa in Mortimer Road, Kilburn from about 1897 to 1902. The property was later renumbered as 6 Mortimer Place but was damaged in 1944 by the V1 flying bomb which destroyed North Hall, the house next door. Both buildings were demolished and today the site is covered by Halliwell House on the Kilburn Gate estate.

While at Harlestone Villa, Borglum painted murals for private homes but he is best known as the sculptor who produced the giant heads of US presidents carved into the summit of Mount Rushmore in South Dakota. 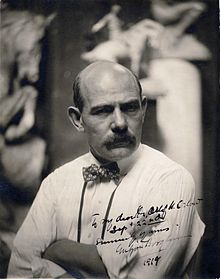 Born in a frontier town in Idaho in 1867, Borglum was of Danish extraction. His father was a Mormon with two wives who were sisters. Borglum ran away from home to study art in California, and at the Julien Academy and the École des Beaux-Arts in Paris where he was influenced by Rodin.

He arrived in London in 1896 and rented a studio in West Kensington before moving to Kilburn. Although gaining recognition as an artist he was not earning a lot of money. He said, “I have had the disturbing pleasure of being called Master by the French critics and some Americans, yet at the moment I cannot spend sixpence without wondering where the next one will come from.”

In 1901, the daughter of a Californian friend came to stay at Harlestone Villa. Her name was Isadora Duncan and at a party she danced for Borglum on the villa’s large lawn, scattering rose petals behind her.

Borglum received a commission for twelve painted panels to be installed in the Midland Railway Company’s new hotel in Manchester. The fee was five thousand guineas (today worth about £550,000). In 1903 he supervised installation of the panels which were made in America. They depicted scenes from ‘A Midsummer’s Night’s Dream’ and the court of King Arthur.

Returning to America, Borglum became a very successful sculptor. His politics were crude; he was anti-immigrant and a racist. He criticised other artists and even called for the destruction of a public statue. Borglum courted the press and they loved him. In 1915 he put his reputation on the line and promised to make a huge monument to Southern Confederacy at Stone Mountain in Georgia. His patrons, the United Daughters of the Confederacy, did not have sufficient funds so he mortgaged his 500-acre estate in Connecticut. But after ten years he had completed less than a tenth of the carving and was fired by the Stone Mountain Association, accused of wasteful expenditure and having an ungovernable temper. The Association claimed ownership of his models and put out a warrant for Borglum’s arrest. He destroyed the models and became a fugitive, deeply in debt and publicly humiliated.

Doane Robinson, a South Dakota historian, had read about the large numbers of people travelling to Georgia just to watch Borglum at work. He believed that a mountain carving could put the little known South Dakota on the map. He wrote to Borglum suggesting a project in the Black Hills, perhaps carvings of the western explorers Lewis and Clark, Buffalo Bill and Chief Red Cloud. Borglum replied that national heroes would be better and it should be the Presidents Washington, Jefferson, Lincoln and Teddy Roosevelt (a personal friend of Borglum). But the attempt to raise $50,000 as seed money from the public only realised $5,000. The project became a joke. One paper said, “Borglum is about to destroy another mountain, thank God it is in South Dakota where no one will ever see it.”

President Calvin Coolidge was persuaded to spend a summer holiday in South Dakota and this helped raise the total to $42,000. Coolidge pledged the government would provide additional funds. In 1929, Borglum began work with only about a tenth of the money he needed. He didn’t even know if the project was feasible as it was 500 feet to the top of Mount Rushmore and the weather in winter would make work impossible. Using jack hammers and dynamite Borglum thought the figures would take four years to complete. But money ran out and work slowed down.

In 1931 the Rushmore Association was in debt with little chance of raising any further funds during the Depression. Worse was to follow, after a severe drought created the Dustbowl. People left the state in droves and work stopped completely in 1932. Borglum and Senator Peter Norbeck persuaded influential contacts to obtain federal funds from the National Park Service and work recommenced after a year’s delay. Borglum’s 21 year old son Lincoln, who was very popular with the 400 workmen, was the site supervisor when his father was away.

In March 1941, just as he was completing the sculptures, Gutzon Borglum died suddenly from complications after surgery. He was 73. Congress stopped all funding as the United States joined the Second Wolrd War that December but Borglum’s son Lincoln finished the project, which had taken 14 years and involved removing half a million tons of granite to form the four 60-feet high figures.

Here is a film showing Gutzon Borglum working on the mountain: