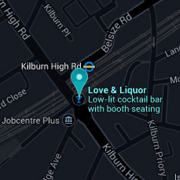 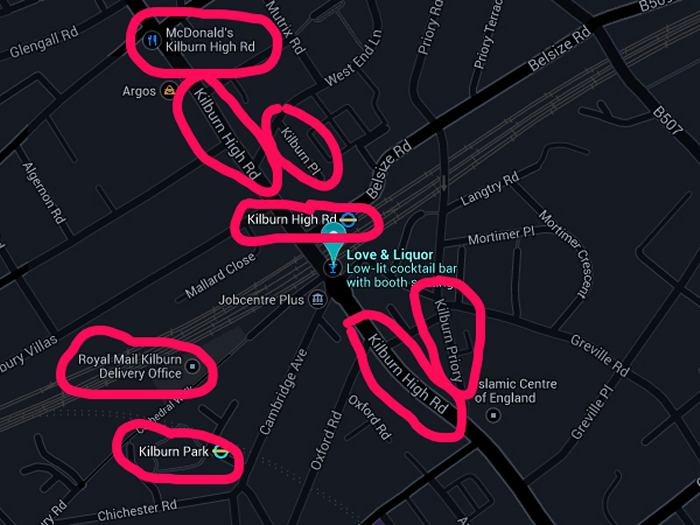 In an interesting exchange this afternoon on Twitter, locals called out Love & Liquor (formerly The Westbury and before that The Red Lion) on Kilburn High Road for trying to perpetuate the idea that it was really in Maida Vale and not Kilburn.

In an astonishing coincidence, while this was happening someone made a small edit to the Wikipedia entry for Kilburn High Road Station, which placed the station in Maida Vale.

Read the exchange below (or go to Storify if you can’t see it).

OK, it’s a bit outside the hood, but I don’t like refusing invitations, and it’s only a quick 187 bus ride from West Hampstead. Thanks to @w9maidavale aka Lord Elgin for this write-up. Dodgy photo is all down to me.

There are a lot of hungry people in W9 but not many places to eat out. So, a new restaurant is always a major event for the locals and there’s been quite a buzz about The Summer House – a temporary installation occupying the premises of the much loved Jason’s, right by the canal on Blomfield Avenue.

The PR spin has been about depositing The Hamptons in Little Venice. The website boasts of crisp summer salads, rosé wines and the best fish & chips in town, while the interior designers have ransacked Ikea and Habitat for a neutral, mildly nautical theme.

The dining room is lovely; light and airy with a splendid view of the canal. When it gets a little warmer there’ll be some fine tables on the terrace with the water lapping at your ankles.

Lady Elgin, a die-hard veggie, took fright at the menu, so Lord Elgin invited two hungry hyperlocal tweeters – @WHampstead and @stjohnswood1 – to help sample a wide range of fish-based dishes of variable quality. WH and SJW were scouting for girl-friendly date venues. Lord Elgin was hoping for a good local regular for evenings when he doesn’t want to cook.

The Summerhouse is primarily about fish. But it’s not a proper seafood joint. There’s no oyster bar, no catch of the day, no lobster bisque; in fact, nothing that requires a good nose and regular trips to Billingsgate. It’s seafood for people who don’t like seafood, who find de-boning a fish a bit of a struggle and who normally go for the fish cakes rather than the sea bream.

You are also allowed a cow steak, if you want, and the owners have put a single pinot noir on the list in its honour. Otherwise, it’s purely heavily marked up whites leavened by the occasional rosé, all rather underwhelming WH.

Lord Elgin’s a bit of traditionalist and began with clam chowder – plenty of potato, packed with bacon, no discernable flavor and no clams in sight. SJW was more fortunate with the smoked salmon and WH’s ample portion of calamari certainly qualified as “crispy”..

Mains were a mixed bag too. WH was satisfied with his prawn tagliatelle and said it was almost as good as the one he’d cooked himself the previous evening. SJW loved his swordfish steak – done just right and not too many weird sauces. Elgin, as host, was allowed to have the £16 fish and chips. Soggy batter, sickly tartar sauce and the eye-popping price tag disappointed. The chips, to be fair, were perfect, but you can have these on their own from the “Accessories” section of the menu. SJW deducted a point for this bewildering pretention.

No complaints about the portions. Full up with fish, three grown men only managed a single Pimm’s jelly between them for dessert.

The Summerhouse will do well. There’s plenty of W9-ers who’ll flock to the pretty canalside room for fishcake and chips and won’t blanche at the £30-£40 a head they’ll pay for the privilege. But it’s a missed opportunity to create something a bit more fishy that would attract a more discerning crowd from further afield. SJW and WH announced that the watery setting wasn’t enough to swing their next big date the Summerhouse’s way.