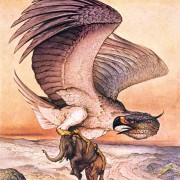 Charles Maurice (known as Maurice) and Edward Julius Detmold were twin brothers with outstanding artistic ability who worked at the Sherriff Road Studios between 1902 and 1905.

They were born at 97 Upper Richmond Road on 21 November 1883. Their parents Edward Detmold and Mary Agnes Luck had married in 1881. Mary was brought up by her uncle, Dr Edward Barton Shuldham. He was born in Bengal where his father was an officer in the Indian Army. Mary’s parents may have died when she was a child: in 1871, aged 10, she was living in Croydon with Edward and his wife Elizabeth, who had no children of their own. Dr Shuldham was to play a major role in the Detmold story.

Edward was the son of Julius Adolph Detmold, a colonial merchant from Hamburg; ( Detmold is a town in Germany). It seems Edward decided not to enter the family business. Instead, in 1876, Julius placed his son as a ‘pupil’ with farmer Samuel Butcher in Hampshire, to learn the business. Ostensibly, theirs was a partnership but Julius remained in control. When the business failed in March 1879, Julius settled its debts by paying 20sh in the pound and the bankruptcy was annulled. Butcher said he’d always had sole management of the farms and was paid money for Edward’s keep. There’d never been any profits. Samuel later took Edward to court, accusing his ex-partner of stealing papers and other property from his farmhouse. Butcher said Detmold had threatened him and his wife Jane: “He placed himself in a fighting attitude and said “I’ll punch your head and thrash you both within an inch of your lives.” Detmold countered, saying he believed the papers were the property of his father. Both parties were bound over to keep the peace for six months.

A couple of years later, the 1881 census showed Edward still living in Hampshire, where he was sharing a house with his brother Henry. Henry was an artist while Edward had remained a farmer, with 250 acres employing five men and two boys. Dr Shuldham and his wife Elizabeth were the witnesses when their niece Mary Luck married Edward a few months later. The newly weds moved in with the Shuldhams in Upper Richmond Road and their first child, Nora was born the following year. The 1883 baptism record of twins Charles Maurice and Edward Julius describes Edward as a stockbroker, so he’d abandoned farming. He tried various jobs and became an electrical engineer: in the 1908 phone book he is listed as ‘Electrical Signs’, at 7 Warwick Lane.

The Dictionary of National Biography entry for the Detmold twins says their mother probably died shortly after their birth. This is wrong, Mary died in 1954. Rather, it looks as though the marriage failed and in 1888 Edward left and the three children and their mother stayed with Dr Shuldham.

Dr Shuldham graduated from Trinity College Dublin and was a physician at St James Homeopathic Hospital and the editor of ‘The Homeopathic World’. He wrote several medical books and was interested in stammering. Lewis Carroll, a convinced homeopath and a stammerer was a friend of Shuldham. Several of Shuldham’s medical books are in the British Library: The Family Homoepathist (1871), Headaches: their causes and treatment (1875), Clergymans Sore Throat (1878), Stammering and its rational treatment (1879), and The Health of the Skin (1890).

Shuldham was also an artist and the Victoria and Albert Museum has a landscape by him in their collection. He loved natural history and Japanese painting and agreed to educate the twins after their father had left. Part of each year was spent at Ditchling in Sussex. The Detmold boys showed early artistic talent and some time after the age of six, they briefly studied drawing at the Hampstead Conservatoire in Eton Avenue. This was the only formal training they received, but Dr Shuldham took them on regular sketching visits to the Regent’s Park Zoo and the Natural History Museum. Their uncle Henry Detmold, an artist of some renown, played an important role in helping the twins develop their natural talent. They won prizes in a nationwide art competition before they were eleven years old.

Dr Shuldham moved to Hampstead from south London and is shown at 15 Frognal (renumbered as 42) from 1891 to 1896, and then at ‘Katwych’ 49 Fairhazel Gardens, (1897 to 1906). This was followed by a series of moves downhill – literally and in terms of the value of the property he occupied. From 1906 to 1910 the family was at 13 Inglewood Road in West Hampstead. By the time of the 1911 census he was at 5 Priory Court in Mazenod Avenue and then he moved to number 7 where he stayed until his death in 1924, aged 86. Rather surprisingly, previously relatively wealthy, he left only £14 to Mary Agnes Detmold. 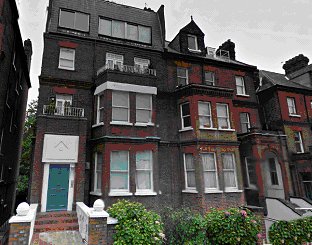 Number 42 Frognal (on the left), is a substantial 14 room house and one of a pair of semi-detached Victorian properties. Originally the roof line and front entrance would have mirrored number 40, (right).

As child prodigies, at the age of 13, Edward and Maurice Detmold were the youngest people to exhibit watercolors at the Royal Academy. These were displayed ‘on the line,’ in other words at eye level, a great accolade. They also sent drawings to the Institute of Painters in Water Colours, where the doorman, seeing two children, refused them entry. He asked; “Whose pictures do you want to see – your father’s?’” They replied, “No, our own.” He fetched the secretary, who let them in. 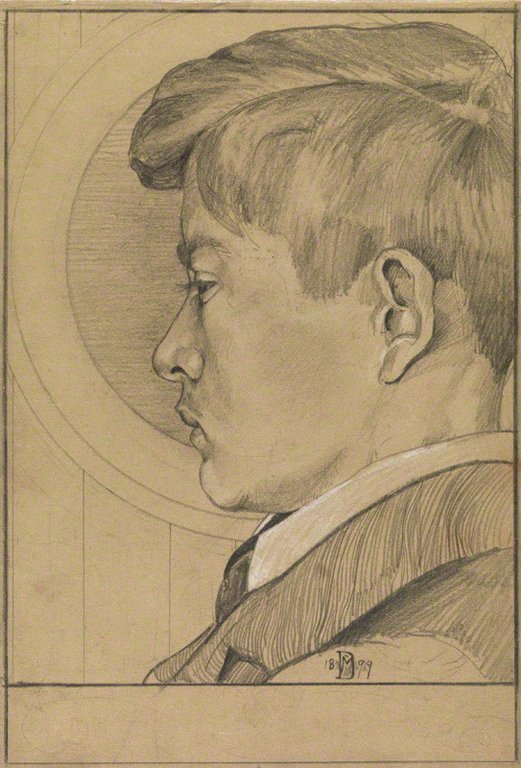 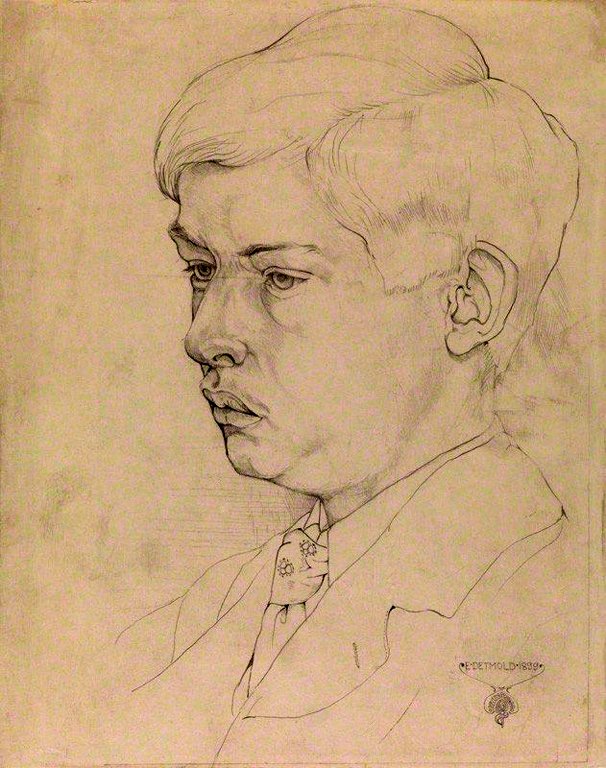 Working jointly on their illustrations and etchings, in 1899 they produced a book of illustrations for Pictures from Birdland, which had rhymes by Edward Shuldham. With money from their sales, they bought and installed a printing press at their studio in Sherriff Road and produced a large number of prints. Their talent was obvious: a June 1900 review of work then on display at the Fine Art Society, described the “clever boy artists” as possessing “very remarkable genius. No reproductive process could quite do justice to their skilful brushwork and the quaint charm of their coloured etchings.” This critic concluded: “If they are not entirely submerged by juvenile success, if they are strong enough to survive precocious popularity and its attendant vices, they are sure to be heard of again.”

In 1903, at the age of twenty, they created a portfolio of sixteen superb watercolors for Kipling’s The Jungle Book. Their original drawings are in Kipling’s home ‘Batemans’ in Burwash, Etchingham, East Sussex, and the British Library has a set of the astonishing prints in the rare book collection which I went to see. 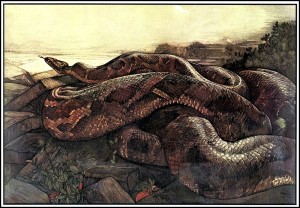 Kaa the Python, illustration for The Jungle Book by Maurice Detmold, 1903

A review of the their work in 1907 said: “Many mediums are within their authority: etching, drawing, fresco and glass-painting, brushwork and wood-printed blocks in the Japanese fashion. In everything they do there is evidence of close observation, accuracy, strength and a wonderful sense of composition.”

But their productive partnership came to a sudden end in April 1908 when Maurice Detmold committed suicide. He was found in his room in Inglewood Road by his brother, in the bedroom they shared. Maurice was lying on the bed with a bag over his head and a cotton wad soaked in chloroform. There were three bottles of chloroform nearby and two dead cats in a box. He had left a suicide note which read: “This is not the end of a life. I have expressed through my physical means all that they are capable of expressing, and I am about to lay them aside – Maurice.”

The body was identified by his father Edward Detmold. At the inquest Dr Shuldham said the boys had lived with him since they were young. He said they were about to go to the country (presumably to Ditchling). He had given the brothers chloroform before to kill half-starved stray cats, so he was not suspicious when Maurice asked for more. When Edward Julius was asked if he knew why his brother had killed himself, he replied: “I cannot tell, except that he had done all that he wanted to do. He was most cheerful as a rule, and was exceptionally successful in his work.”

The verdict of the jury was: “suicide whilst of an unsound mind.” Maurice’s suicide appeared to re-unite his parents Edward and Mary, who started to live together again. The 1911 census shows them in number 5 Priory Court , a block of flats in   Mazenod Avenue. Dr Shuldham and his wife occupied number 7 with their unmarried daughter Nora. Edward Julius, Maurice’s brother, was still living with the doctor but he later moved in with his parents. They left Priory Court for 137 Broadhurst Gardens , about 1932, where Edward Detmold senior died in 1938. 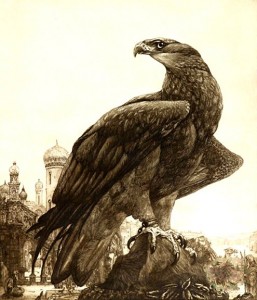 Edward Julius Detmold was stunned by his brother’s death, but he continued to work at the publishers Hodder and Stoughton and at the Rossetti Studios in Flood Street into the 1920s and 1930s, creating etchings, drawings and paintings, and coloured block prints. Then he largely withdrew from public life. After the death of his father the family moved in 1940 to ‘Bank House’, a large house on the edge of Montgomery, North Wales where Edward lived with his mother and sister Mrs Nora Joy, the artist Sidney Lawrence Biddle and the musician Harold Rankin Hulls. Biddle and Hulls had lived with the family in West Hampstead. His mother Mary died at Bank House in 1954. Three years later on the morning of Monday 1 July 1957, like his brother Maurice almost fifty years before, Edward committed suicide. He shot himself in the chest and died of a haemorrhage.

At the inquest Hulls said that he had owned the single-barreled shotgun which Detmold had used to kill himself, and he kept it in his bedroom. The local doctor said he had treated Detmold for arterial disease which caused fainting attacks, and depression was a common symptom in such cases. Then the coroner read a statement from Mrs Joy who was too upset to attend the inquest. She said that after Hulls had left, her brother had returned to the house and kissed her and gone into his room. This was not unusual because they were an affectionate family. Then she heard the sound of a shot and she rushed into his room. Her brother staggered towards her and fell at her feet. She said that in the past year Edward had lost the sight in one eye and the other eye was deteriorating rapidly. This, combined with his blackouts, had caused considerable depression. The coroner’s verdict was: “death by self-inflicted gunshot wound while the balance of the mind was disturbed.” 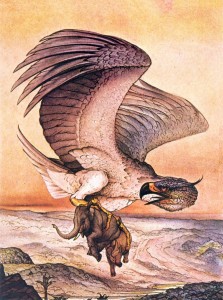 The Roc which fed its young on elephants, for The Arabian Nights, by Edward Detmold, 1924

The twin’s art work, influenced by Japanese prints, particularly those by Hiroshige and Hokusai, was highly original. In 2002 at a Sothebys book auction The Arabian Nights with illustrations by Edward Detmold, was estimated to reach between £100,000 to £150,000. Today their work is greatly prized.