You are here: Home / News / Mother and baby home

For many years 141 West End Lane was a mother and babies home run by the Paddington and Marylebone Ladies Association. This charitable foundation was established about 1882 by Joanna Frances (Joan) Bonham Carter to ‘rescue friendless girls’ who were unmarried mothers. They originally had a refuge in Lisson Grove, open all night, with their ‘Main Memorial Home’ at 40 Cartwright Gardens, Bloomsbury. The Association employed at least one ‘outdoor rescue worker’ and a live-in superintendent at West End Lane.

Joan’s father was Henry ‘Harry’ Bonham Carter, a cousin of Florence Nightingale. On her return from the Crimea, he was closely involved with her in setting up training schemes for nurses. Harry was a wealthy barrister and Director of the Guardian Assurance Company. He married Sibella Norman and they had twelve children, eleven sons and one daughter, Joan. The family home was at 5 Hyde Park Square.

The actress Helena Bonham Carter is distantly related to the family. 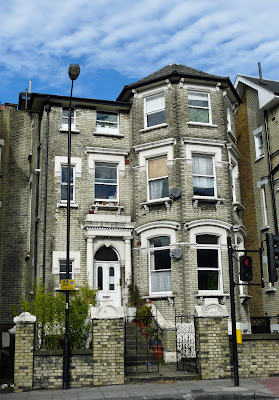 ‘Lancaster House’, the name given to the property by a previous owner, can still be seen on the gate pillar.

About 1935 the Association took over 141 West End Lane as their main Home. Unmarried women had their babies at local hospitals such as New End in Hampstead, and then stayed at the Home few several weeks. The babies were often baptised at St James Church and usually the father was not named in the register. The numbers of baptisms increased during the War. Often the mothers had to give up their babies for adoption. Electoral registers show that in 1948 there were 19 women at 141 West End Lane, including the superintendent Miss Agnes A. Nicholson, who was still at the Home in 1970.

Today, several heart rending messages have been posted on the Internet from people trying to trace their relatives:

‘I was born in New End Hospital 1943. My birth mother had been in the WAAF. She was sent to 141 West End Lane. She kept me there for six weeks during which time I was baptised at St James Church. She went with someone from the home to hand me over to an adoption agency. This seemed to be routine for all the mothers’.

‘I spent eight weeks at the mother and baby home in 1964. It was run by a Miss Nicholson, my baby was adopted in October 1964 by a Church of England adoption society. I am still trying to trace her without success’.