What are the chances of finding two safe blowers in West Hampstead? Even more unlikely is the fact that they were both living there in 1955. But surprisingly, there is no obvious link between the men.

At the end of the story you will find out all you need to know about blowing up a safe and how to make your sex life go with a bang! Read on. 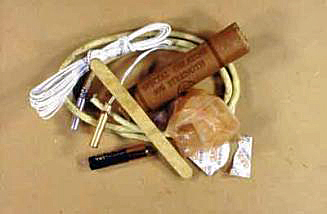 This photograph of a complete safe-blowers kit shows a stick of gelignite and two different types detonator: an aluminium one with a fuse attached, and a copper one which has two wires extending about 6 feet to a longer shot firing cable. A pen-light torch battery is all that is required to fire the detonator. The lolly stick is commonly used to tamp and shape the jelly. The other item really is a condom. A ‘packet of three’ was a common sight on the prosecution table in the High Court. They were pushed into the gap between the back of the safe door plate and the front of the lock cap. Through this is packed the charge with a detonator, and everything is then held in place with some plasticine.