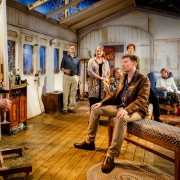 After Electra opened at the Tricycle Theatre last night. We sat down with the director (and acclaimed actor) Sam West to find out more about the play and his take on Kilburn. 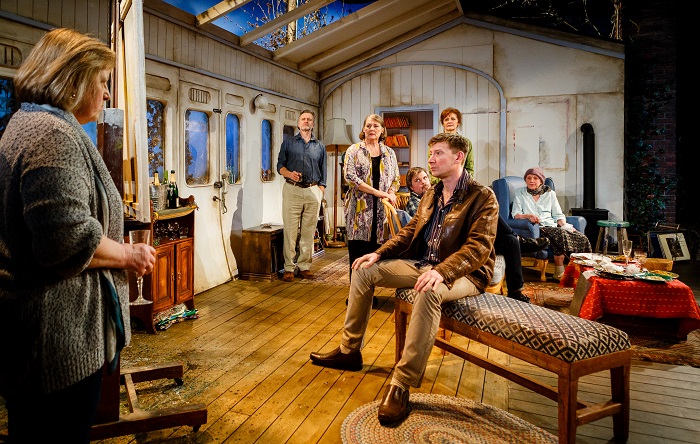 The full cast of After Electra. (Photo: Steve Tanner)

The play is called After Electra, should we expect a Greek Tragedy?

No, you should expect a black comedy, inspired by a Greek Myth but certainly not one you need to know anything about Greek drama to enjoy. The play is about an 81 year old artist called Vergie, who calls together her daughter and best friends on her birthday and announces she’s going to kill herself and they argue and try and stop her. It is very funny! It’s mostly about the difficulty of balancing work and children. In the original story, the Electra Myth, Electra and her brother Orestes kill their mother Clytemnestra, that doesn’t happen in this play, it’s mostly a comedy about what to do when you want to kill your mum!

We’ve all been there…

We’ve all had those feelings! And the Greeks put on plays about it so you didn’t go out and kill your mum. April De Angelis, the writer, has very carefully and cleverly written it about a woman who is a very accomplished artist and feels a calling towards her art, more than she does towards her children. So it’s a lot about what you do when you feel like that really, because I think one of April’s points is that men, on the whole, don’t get pilloried when they go off and excel in business and neglect their children and women, if they do that, get put on the front pages. They’re expected to have this bottomless well of unselfish motherhood, and the play is about what happens if you find that you don’t have that.

Yes, it was written in response to a request from Plymouth Theatre Royal, where it started, as a way of improving the situation about the lack of decent roles for older women. Because we have a lot of very good older actors who aren’t getting the parts… there are fewer meaty roles. It’s a cast of eight, only one of whom is under 30, and although the leading character is 81, there are very good parts for people in their 60s and 70s.

After a successful run in Plymouth, you’re bringing the play to London. How did the transfer to the Tricycle Theatre come about?

Yes, it’s a Plymouth production and the Tricycle decided that they wanted to pay for it to come to London so, although we’ve been working in tandem with them, it’s not a co-production. We’re delighted that Plymouth work gets a chance to be seen in the capital because we’re all very proud of it and most of the company live in London. Because Plymouth is a local regional theatre, it’s important for it to go to a theatre which has a good feeling of constituency, a good feeling of localism, like the Tricycle does. Not all London theatres feel like the Tricycle, do they? Some of them feel like posh transfer houses, where you put on things for a small metropolitan audience. But the Tricycle, whenever I’ve been, has always felt like a theatre that is really in the heart of its community and I’m really pleased that we’re taking it there.

And has the transfer been a smooth one?

Yes, though we’ve had to cut a metre off the set! It fills the space quite well but the stage at the Tricycle is not quite as wide as the Drum in Plymouth. Because the Tricycle is a bit like an Elizabethan theatre, a sort of horseshoe, there are some really interesting angles from where to see the show, which I was very pleased about when we brought it in. It would have been boring to have to add a metre, that would have made everything take slightly longer, but in fact we’re sort of squeezing it like a box, so the pressure should get slightly bigger and the show should get slightly hotter and faster.

Have you performed at the Tricycle in the past? Are you familiar with Kilburn?

I’ve never performed there. I’ve rehearsed there and I’ve seen many things there. I rehearsed a Donmar production there about 6 years ago and was delighted to be going there every day for 5 weeks, but this is the first time I’ve put a show in. I live in North London and have friends in the area, so it’s a pretty easy journey for me. I’m very fond of Middle Eastern food, and we’ve been trying out the various Turkish and Lebanese restaurants in Kilburn, which has been really great.

So, why should locals come to the Tricycle and see the show?

After Electra is on at the Tricycle Theatre from 7 April to 2 May.