You are here: Home / News / thunderbolt

On Thursday night 5 July 1877, a huge storm burst over London. Just after eight o’clock, people in Kilburn saw a vivid flash of lightning and heard a loud burst of thunder, this was followed by a second and then a third. After the third peal of thunder, a ball of fire struck Bridge Street at the bottom of Kilburn on the Willesden side of the High Road. (This street has now been demolished). Residents said, ‘the terrific crash sounded like the discharge of one of Krupp’s guns or the Woolwich Infant’. This is a reference to the 35-ton Armstrong, the most powerful gun in the world, made at the Arsenal in 1870 for HMS Devastation.

For some seconds, the whole area seemed to be enveloped with flame; people screamed and some fainted with shock. The telegraph wire running from Mr Carpenter’s post office and shop in Manor Terrace to Kilburn Park Road was completely fused. Molten liquid poured down and instantly coagulated into lumps of clinker on the ground. Choking, thick, bluish-yellow smoke filled the air. A little girl called Elizabeth Frost, who lived at 6 Bridge Street, had her hair severely burnt. The volume of the clinkers which ranged from the size of a walnut to a man’s hand, was thought to have been about two bushels (equivalent to 16 gallons). Some of these were shown on display in the offices of the Kilburn Times in Carlton Road. 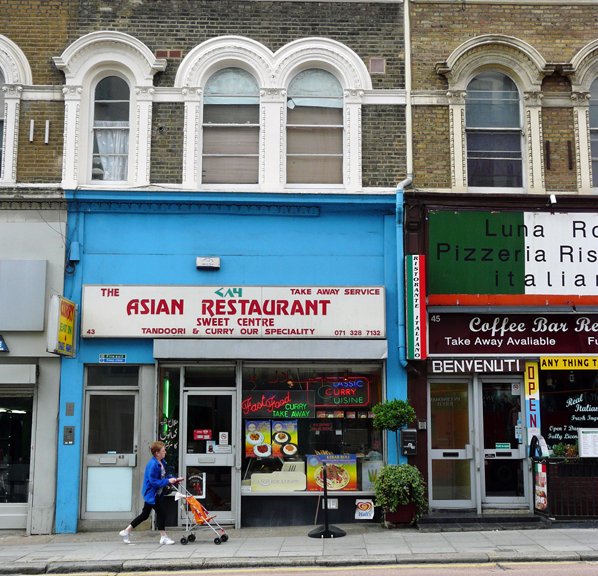 43 Kilburn High Road – what was part of Manor Terrace

Despite the sudden violence and shock, surprisingly little damage was done to people or property – just a few windows were broken in Mr Brown’s, an undertaker in Oxford Road.

In 1888 George Symonds, a leading scientist, read a paper at the Royal Meteorological Society called ‘The Non-Existence of Thunderbolts’. As you can tell from the title, he argued that thunderbolts did not exist. He noted various examples, and used the Kilburn incident as his main argument that material did not fall from the sky during thunderstorms, which were just electrical discharges. He said that the clinkers in Kilburn were from the fused telegraph wire. The nature of thunderbolts has been a controversial issue for many years: but the Kilburn fire could have been caused by ball lightning.

They say that lightning never strikes twice in the same place, but on 14 July, l810 the Watford coach was hit by a ball of fire as it passed the Kilburn Wells. The Gentleman’s Magazine reported that a woman passenger was hurt and the ring on her finger was melted.

A clipping has emerged (via @Tetramesh) from New Zealand’s Taranaki Herald, describing the incident (via the National Library of New Zealand’s archive) 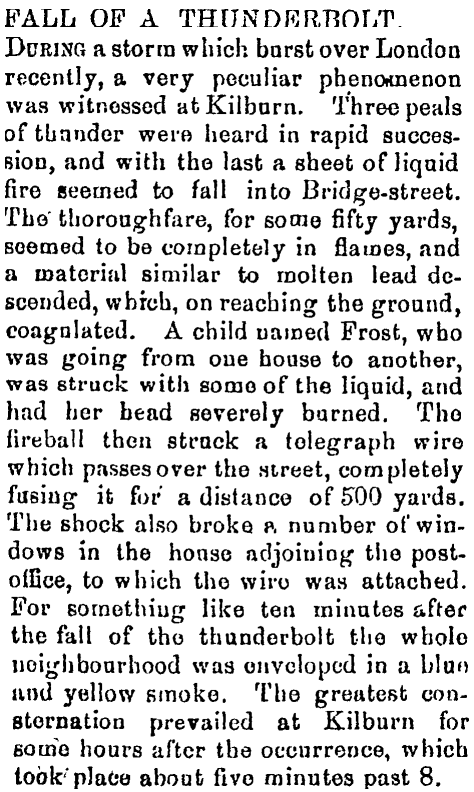