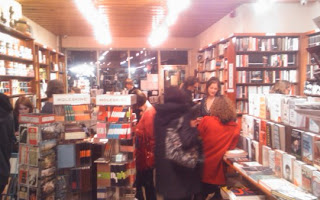 Last night saw an experiment in West Hampstead. West End Lane Books threw its doors open from 9 to 10pm to @WHampstead twitter followers (and a few others!). There was wine, there was chat, there was 15 percent off everything. A dozen or so #whampers decided that the election debate on TV wasn’t enough of a lure (or recorded it) and getting to know a few fellow locals was a far better option.

It was great to see a mix of familiar faces such as @bubela, @TheWetFishCafe and @SamWong1 along with some first-time whampeventers including @designbyday, @jenny23232323 and @tractorgirlie. 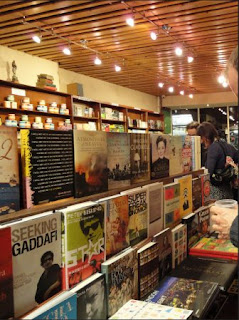 Plenty of books were bought (lets not forget that if we want to keep our independent bookshops we do, at least occasionally, have to buy books from them and not Amazon), a reasonable amount of wine was drunk, and hopefully everyone had a good time!

Other bookshop / @WHampstead tie-ins are being mooted, so keep your eyes peeled and follow the #whampbooks hashtag. The bookshop also organises lots of its own events.

The Winch Needs You! West Hampstead Hustings – the who, the why and the WHAT?