Bar 77 was a West Hampstead institution. I was one of many sad people when the owners called it a day. What came in its place was Cini. No-one knew how to pronounce it and it seemed no-one wanted to eat there. I was among many who didn’t care at all when it finally closed its doors.

What now for this landmark address? The left-hand side of Bar 77 – once the venue for my 30th birthday party – is now a mini-market. But the right-hand side has become the accurately named “Mill Lane Bistro”. It’s rather nice. 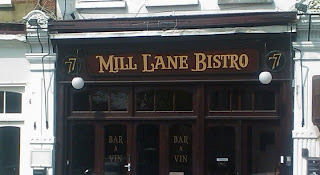 Deliberately or not, the dark wooden tables hark back to those ’77’ days as does the friendly welcome. The menu now is a sort of hybrid British/French selection. It is short. Very short. I think this is good. New restaurants that try and maintain a high standard when the menu stretches across several pages are usually asking for trouble. There are three starters and three main courses along with a couple of specials. There is also a rustic bar menu too – making it very clear that you’re as welcome for a drink and a bite to eat as for a full meal. Despite the brevity of choice none of the eight of us seem to struggle with what to have. It’s short and it reads well. It also means we don’t take long to decide. 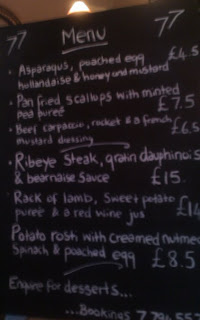 While the starters were being prepared we turned our attention to the wine, upgrading from glasses to bottles of a good white Entre deux Mers (£16) and a Pinot Noir (£24) that had @Ghoul_of_London in raptures. The wine list didn’t seem extensive, but what we had was good.

The starters duly arrived and everyone tucked in. Tom and @MarkLedder‘s asparagus looked great with large (hopefully English new season) spears topped with a poached egg (“slightly overdone”) and “not enough” hollandaise. @chinmj‘s decision to go for a bar snack starter of hard thin salami sausage with bread left him sawing away at the sausages but with no complaints about flavour. The beef carpaccio, although not thin enough to merit the name, was delicious and unusually the dressing was very lightly applied, which I appreciated. Scallops varied in size from normal to enormous, leading to some quite amusing looking plates but the chef had at least tried to balance them out agaist perhaps too much of the de rigeur pea purée. 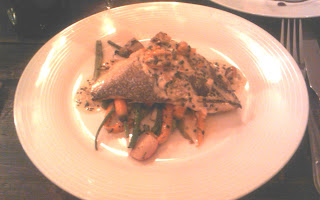 Mains of ribeye steak, sea bream (the special), rack of lamb, and a vegetarian option of rösti for @uponair all came in generous portions but far less overwhelming than the plates at LoveFood a couple of weeks earlier. The bream was particularly well presented with a “spring festival” of baby vegetables underneath an ample fillet of fish topped with a light creamy sauce and mussels although @StyleOnTheCouch seemed less impressed than I was. Some would have preferred their lamb a little pinker and we were surprised not to have been asked how we wanted it cooked, however it tasted great. @DJStoney may have even used the word “sublime”. Steaks did come out as requested with @Kayskill‘s medium rare looking on the money. 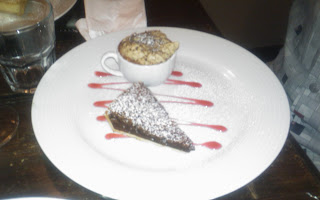 Of course we had room for desserts: a classic lemon tart and a chocolate gourmand plate were both well received. @MarkLedder had spent the day caffeined up to his eyeballs in Paris dashing back on an earlier train so as not to miss #whampreview excitement. Immune to any further impact he joined me and @uponair in an espresso only to find that it wasn’t an espresso at all but just a small strong coffee. It’s a small thing but, for a French style bistro, worth getting right.

It sounds like I’ve picked out all the minor mistakes, but overall everyone had a great evening. Notably the overall score was quite a bit higher than the separate scores because the atmosphere is good, it’s comfortable and relaxed. Service was accommodating and as the place has been open only a few weeks, it is not surprising that it hasn’t quite reached perfection. I shall definitely be back and am delighted that the Bar 77 legacy has been revived. Indeed, there’s no reason why the Mill Lane Bistro can’t become an institution in its own right.