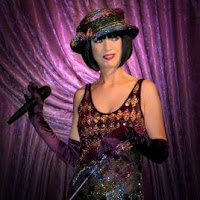 Holly Penfield has a one-woman show (+ band and bartender!) at Hampstead’s New End Theatre. The Saloon Singer sees the cabaret artist link together a collection of songs from “One for the Road” to “Rhythm of Life” via “The Boys in the Backroom” and a host of others – some classics, some less well-known.

In a variety of glam outfits and wigs, Penfield channels Marlene Dietrich, Marilyn Monroe and Julie Andrews, among other sultry sirens, and also gives us a rather good self-penned song. In between the music, an overly breathless Penfield coquettishly declares her love for the audience, the silver screen and hats with shoes on them.

There’s rather a lot of audience participation, as she hauls a succession of men on stage. When it’s just to be sung too and mildly embarrassed I don’t mind this too much, but the poor guy dragged up during the finale could barely have looked more uncomfortable and there was something ever so slightly distasteful about seeing this woman of indeterminate age ‘riding’ a hapless punter who had presumably paid the full £18 for his ticket.

It’s a 90 minute show, with a ‘pause’ rather than an interval, during which Joe the bartender (who’s on stage for the whole thing) hands out free glasses of wine, which is a nice touch. I can see it working well in a cabaret club setting where Holly would be able to roam among the audience, but the stage version didn’t do it for me. The script – such as it is – is loose to put it mildly, which means she occasionally loses her way but the very act of staging a show like this in a theatre rather than a club means the audience has certain expectations.

I would rather have just had the songs because there’s no doubt that Penfield can sing – the highlight of the evening was her rendition of The Eagles’ track Desperado. In what one assumes is the latter part of her career, playing to her strengths would seem to be the way forward.

The Saloon Singer runs until October 24th. It starts at 9pm, so there’s time for a drink at one of the nearby pubs or a burger at Tinseltown on the corner (where they kindly gave me a free smoothie!)
Book tickets

*Disclaimer: I received a free ticket for the play courtesy of the theatre