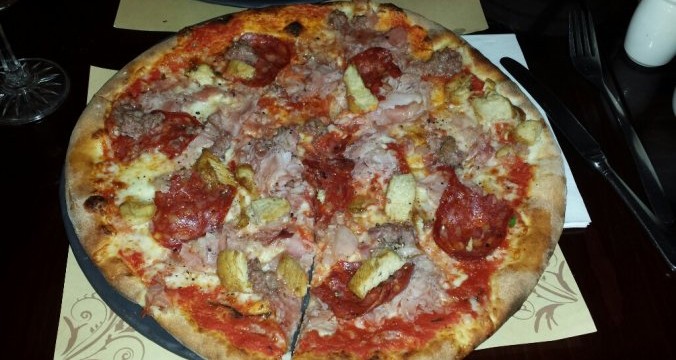 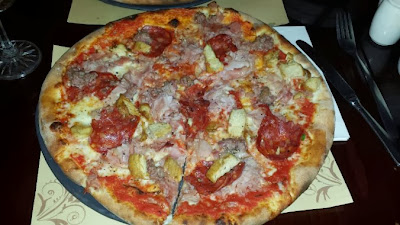 Last week, an intrepid group of locals, aka “Team Pizza”, checked out the latest addition to the neighbourhood, Poco Pizza. Eugene tells the story.

Poco Pizza recently opened in West Hampstead on the site of Paya. Confusingly, the management hasn’t changed and the Paya sign still sits above the window, while a wrap-around sheet advertises the pizzas.

Inside, we were given both Paya’s original Chinese/Thai food menu and the pizza menu. A wood fired pizza oven has been installed right in the middle of the restaurant, so customers can see the pizza chef at work. Offering two such different cuisines doesn’t always inspire confidence, so Team Pizza approached with trepidation.

Having seen this menu, and hearing of 41 possible extra toppings, we were a bit surprised to see that the restaurant menu was more limited than the takeaway menu; in fact it was more or less completely different and one-size only. There was still a good choice, but there was no cheeseburger or chilli cheese dog pizza here. In fact, the restaurant menu was very orthodox, and prices were reasonable, ranging from £8.50 to £12.50.

The house white was perfectly serviceable house; the wine list isn’t extensive, but that’s fine for a place like this. Strangely, we noticed there were four different pots of pepper – of varying shapes and size, but no salt shaker at all.

After starters of olives and peppers stuffed with what claimed to be feta cheese, but tasted distinctly like cream cheese, we tucked into our pizzas. The consensus was that the dough was too soft; certainly mine felt just about baked but it wouldn’t have suffered from another minute or two in the oven, or just a higher temperature. The cheese was melted and browned in parts, but still seemed a little runny on the base. It was the same story with the porcini. And on pretty much everyone’s pizza. Nothing was bad, although Tom said his pizza was very underseasoned. It just all felt a bit watery. Nicky’s Fiorentina (unconventionally served with goat’s cheese) had the freshest ingredients, with baby spinach leaves attractively scattered on top. 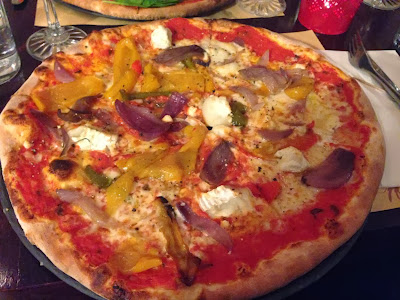 Certainly Poco does not skimp on the toppings. I had a mushroom-based pizza that was dripping in funghi. Across the table, Dan’s meat feast was loaded with ground beef, sausage, chicken, salami and bacon.

The service was friendly, and we all felt bad that we were a bit full to try the tiramisu, which we were assured had been freshly made in the kitchen that afternoon. Such was the hard sell of the tiramisu in fact, that we began to suspect it was by far the best thing on the menu.

The problem, it seems, with Poco is that it is over-complicating the humble pizza with all these toppings, when it would be better to keep things simple. We are spoilt for choice of pizza in West Hampstead – with Sarracino, La Brocca, Bellaluna, La Smorfia, Lupa, Papa John’s, Domino’s and Basilico on the Finchley Road. Given this competition, Poco will need to up its game. This could be a classic case of “less is more” and with fewer ingredients on the menu it shoud be easier to ensure they are fresh and that the cooking times become more uniform.