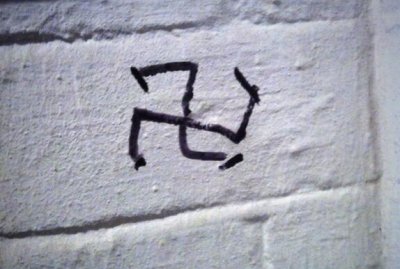 The residents of Crediton Hill, West Hampstead, have been disturbed by a couple of unsettling incidents in the past week and police are asking householders in the area to be extra cautious about answering their doors to strangers.

Firstly, at least four different houses in the road have had swastikas daubed on their front doors. These incidents have been reported to the police, and the Crediton Hill Residents Association (CHRA) is urging residents to be vigilant and to report similar cases to the police by dialling 101.

The graffiti has so far appeared only on Crediton Hill, although one identical looking case was reported in Frognal. The fact that the symbol has been drawn the wrong way round suggests that it is unlikely to be the work of neo-Nazis.

Some residents believe there could be a connection to a door-to-door seller of cleaning supplies, who was spotted in the area at around the time the graffiti appeared. In three out of the four cases, the householder reported turning away the seller before finding the swastika 15-30 minutes later. This could, however, be complete coincidence.

Young yob came by trying to sell me j-cloths and such like, didn't buy any so he left this on the wall #whampyob pic.twitter.com/WGOt6VmOkk

Secondly, a couple of residents on the street have reported a man calling door-to-door enquiring about buying old jewellery and other antique items from residents. The man, in his 50s, has knocked on doors distributing his card. In one case, an elderly woman let him in to her home, though did not sell him any items. She described him as “not aggressive, but insistent”. Suspicious, she called the police. Although the man has not done anything illegal, police believe from the details the woman was able to give that he may be connected to thefts in Kent some years ago, for which a man was convicted.

Larry Trachtenberg, Chair of the CHRA, hosted a meeting at his house on Saturday to talk about recent events, which was also attended by a police representative.

The police are advising concerned residents, particularly the elderly and those on their own, to be extremely cautious about opening their doors to strangers. In the case of the young door-to-door salesman, residents are advised not to confront him but to ring 101 and let the police know he is on the street.

If the second, older man rings your bell, again, police advice is to be vigilant and you may wish to call 101.

It’s worth mentioning that at the local CHRA annual meeting, the local safer neighbourhoods PC reiterated that crime in the area – and on Crediton Hill in particular – is exceptionally low. This is a safe area, but locals should of course not be complacent.

What have I missed since February 17th?