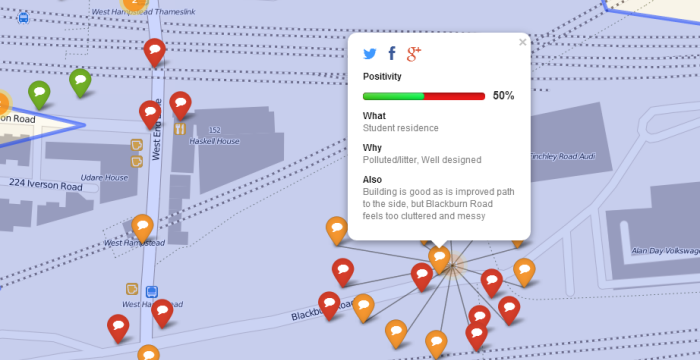 Nearly 100 comments have been added to an online interactive map of West Hampstead, giving an interesting insight into the issues that matter most to local residents. You can explore the map and comments below.

The map outlines the “growth area” (in blue; the NDF boundary is in red), which is where the most intensive development is expected over the next 10 years, but comments are welcome anywhere in West Hampstead and Fortune Green. The “pedestrian bottleneck” at the “poorly-designed” interchange between the stations on West End Lane comes in for much criticism, as does the rubbish strewn on the footpath alongside the railway line to the O2 Centre car park. In fact rubbish – along with traffic – is one of the most widely cited complaints

However, it’s not all criticism. There is also a smattering of green-coloured pins on the map showing places about which people feel positively. The Thameslink station and Beckford School both have both been praised for their design (one modern, one Victorian) and pins around Maygrove Road refer to a “green, quiet open space”. The area outside West Hampstead Library also gets a mention as a “Little oasis on the high street”.

As someone not that familiar with the details of the Neighbourhood Plan, I found this tool was a good starting point and an easy way to engage with the process. It was interesting to see what other locals had commented on, and I felt inspired to pin a couple of my own suggestions onto the map.

It’s very straightforward – using a smartphone, tablet or desktop, simply go to westhampstead.commonplace.is, answer a couple of super simple questions to sign up and then navigate the map to pinpoint specific locations in West Hampstead and comment on how you feel about them. There’s also space to suggest improvements to the area.

There are still a few days left to add your own comments and get your voice heard. The deadline for the conusltation on the final draft of the NDF’s Plan is this Friday February 28th, so over to you!