The five big parties have now all announced their candidates for the Hampstead & Kilburn constituency in May’s general election. We take a look at the runners, the latest thinking on the outcome, and the critical role West Hampstead will play in the final vote count. Put March 31st in your diaries for the West Hampstead Life hustings at The Sherriff Centre.

For Labour, which holds a 42 vote majority, Tulip Siddiq will be aiming to replace the retiring (though never shy) Glenda Jackson. Jackson has held the seat since 1992 though her margin of victory in 2010 was a nailbiting 42 votes. Tulip, who, unlike Glenda, lives in the constituency, was a Camden councillor for Regents Park ward until she stepped down in 2014.

Simon Marcus is the Conservative candidate. He was selected in an unusual open primary way back in January 2013. He is a councillor for Hampstead Town ward and may be unique among modern day politicians for appearing to concede that this might not be his year as far back as January last year.

Maajid Nawaz will stand for the Liberal Democrats. He was the replacement after their original choice jumped ship for another job back in early 2013. Maajid has a relatively high profile and regularly appears on TV and radio talking about Islamic radicalism. He is a former Islamic extremist who now runs Quilliam, “the world’s first counter-extremism think tank”.

The Greens are putting forward Rebecca Johnson. Rebecca is a well-known figure in the campaign for nuclear disarmament, and is a relative heavyweight. This is a high-profile area where Green Jenny Jones polled well in the mayoral election, so it’s understandable the party would want a credible candidate.

Finally, UKIP has turned once again to Magnus Nielsen. Magnus is the only candidate from 2010 contesting the seat again. He made the headlines most recently at the West Hampstead Life local election hustings where he suggested that perhaps universal suffrage hadn’t been such a great idea.

Lets turn to the bookmakers first. Ladbrokes has Labour as comfortable odds-on favourites to hold the seat. Currently at 1/4 (slightly tighter than the 1/5 they were at last week). The Conservatives are second favourites at 5/1 (slightly out from 9/2), with the Lib Dems third at 10/1. The Greens are at 33/1, and Magnus isn’t given much of a chance as the 100/1 outsider.

Lord Ashcroft’s well-regarded polls also give Labour a comfortable lead, although the last poll was conducted back in August before the mansion tax issue came to a head. That put Labour ahead on 47% (+14 points from the 2010 result), Conservatives down 3 points at 30%, Lib Dems at 13% down from 31% in 2010, Greens at 6% and UKIP at 2%. 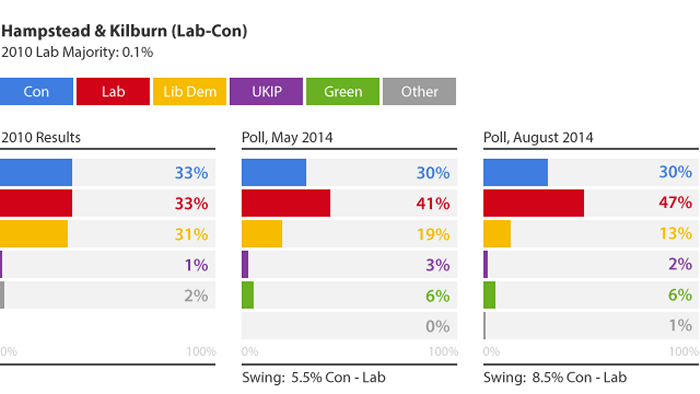 Conservative blogger Iain Dale raised a few eyebrows earlier this month when he called Hampstead & Kilburn as a seat that would change hands at the next election and be a Conservative gain. What leads Dale to the contrarian position? “A lot of new info”, though he doesn’t care to share what that might be.

What is the likely outcome? Few would predict a repeat of 2010, when the seat was the closest three-way seat in the country with just 841 votes separating Labour from the Lib Dems in third . The polls suggest that the Lib Dem vote will crumble (though not as much as it will nationally) and that more of those voters will go red than blue, bolstering Labour’s majority considerably.

The Conservatives are making much of the mansion tax issue – that is Labour’s proposal to raise an additional levy on homes worth more than £2 million. According to estate agent Knight Frank, this consitutency has 4,783 properties that fall into that category at the moment; though not everyone who lives in one is necessarily cash rich. The question is surely whether there are more traditional Labour voters who would defect over the issue than there are disillusioned Lib Dem voters who’ll go back to Labour. If the predictions for the collapse of the Lib Dem vote is accurate, then the answer is clearly no.

In Maajid Nawaz, the Lib Dems might have a candidate who will outperform the polls. Despite being hit hard in the local elections by Labour, the local Lib Dems’ came out ahead of the party nationally beating the Conservatives into third in West Hampstead, Fortune Green and Kilburn (though coming fourth behind the Greens in Conservative-held Swiss Cottage). This die-hard Lib Dem vote in at least part of Hampstead & Kilburn should ensure their third place; and Maajid’s unusual background might bring in some votes from those disillusioned with “normal” politicians. Nevertheless, it’s hard to see him springing the big surprise.

What of the other two? UKIP is not expected to do well here; it struggles in urban areas. The Greens might have wondered whether they had a shot at third, but Maajid is probably too strong a candidate for that. So they are likely to finish fourth, with UKIP in fifth.

Whichever way the seat goes this year, the result is unlikely to be as tight as that in 2010 although it is a relatively evenly split constituency: Hampstead, Belsize, Frognal and Swiss Cottage are reasonably secure Tory areas, Kilburn and the Brent side of the constituency are pretty dominantly Labour, which leaves West Hampstead and Fortune Green as the swing wards in a marginal seat. Voters might have evicted all but one of the Lib Dem councillors last year, and delivered a thumping Labour win, but with a higher turnout and the growing affluence of the area, it very much feels that the streets around West End Lane are where the battle for Hampstead & Kilburn could be won or lost.