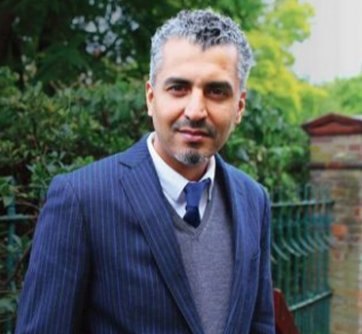 Liberal Democrat Maajid Nawaz is on television far more than any of the other Hampstead & Kilburn candidates and yet despite his high profile and self confidence, he is still a distant third favourite for the seat with pollsters, pundits and bookmakers.

Maajid’s assured manner and strong hustings performances could well mean that he outperforms the party nationally but, during a long chat with him in The Alliance a couple of weeks ago, he himself seemed unsure as to whether being in politics is the right course for him. “This is my first taste of politics and if I don’t win, I’m trying to work out whether I serve the issues I care about better as the head of Quilliam or whether I can continue serving them [through politics], and it’s something I have to decide.”

Quilliam is the anti-extremist think tank Maajid runs and heads up. It advises governments on policy, publishes research, and does outreach work in communities. Maajid’s personal story has been told in many places, not least by him at every hustings and in his book, Radical. As a teenager, Maajid joined an Islamic extremist organisation, which eventually led to him being imprisoned in Egypt. Amnesty International adopted him as a prisoner of conscience and he finally returned to the UK in 2006. He joined the Liberal Democrats before the 2010 election – which was the first time he’d voted.

He argues that there are many reasons why he chose to stand in this election. “Personally I felt it was important because of my journey. I sit here before you in The Alliance in West Hampstead and it’s a long way from a solitary confinement cell in Egypt, but it’s part of my journey and part of what I want to be able to demonstrate is that there is hope to bring people together. It can potentially send out a signal to young angry teenagers that there is another way to engage in the system, who knows how successful that will be, but the symbolism is there at least. If the 16-year-old me had had the alternative messages, who knows how I’d have reacted to it.

Hampstead & Kilburn appealed to him, not just because it was where he first lived when he returned from Egypt, but because it’s such an engaged constituency. He argues it’s a “small ‘l’ liberal” area, though recognises that his party needs to understand why that doesn’t translate into votes for the “big ‘l’ Liberal Democrats”. When the seat became available after the first candidate, Emily Frith, stepped down, Paddy Ashdown asked him to stand.

“If this seat hadn’t come up it’s unlikely I’d have gone for another seat”, he says. “The Liberal Democrats don’t really have safe seats, so it had to be a combination of factors for me to make all this effort and risk potentially not winning. I’m not really comfortable going out of London. I live here, I work here. And within London it’s realistically the only seat I can really gel with.”

If this election is part of Maajid’s journey, the obvious question is where does he see that journey taking him if he does – or doesn’t – win.

“Hypothetically”, says Maajid with comic exaggeration into the microphone, “If I don’t win then there’s a lot to do with Quilliam. Extremism isn’t going away; there’s another book coming out, I’ve got lots of speaking invitations which I keep turning down because of this. Also the nature of British politics means that being an MP isn’t the only position one can have, so I have the option to explore the future of my relationship with the Liberal Democrats.”

We spoke the day before the Daily Mail published revelations about Maajid’s visit to a strip club on his stag night. Despite the big splash, the article didn’t actually seem to cause too many ripples in Hampstead & Kilburn, and Maajid himself was able to quip about it at the next hustings. However, one has to assume that he was aware this was coming: “I haven’t been attacked too much yet by the right wing press but I imagine something might come up and that would also affect my decision because how much of a distraction do I want from the extremism agenda if I’m being gunned at by the right-wing press just because they don’t want me to win a seat.”

We turn to the scenario where Maajid does win. What are his political ambitions, given that he doesn’t yet seem entirely sure whether politics or Quilliam is his natural home?

“My dream job would be to be in the coalition negotiations and get out of it an elected House of Lords and proportional representation. If I got just those two things, then the country has changed forever, and I’d be happy as a backbencher.”

“Obviously I’d be a new MP so I’d need to give myself a bit of time to learn the ropes and then go forward. If I were to go for a ministerial role, even a junior ministerial role, I would be interested in foreign policy or communities and local government, which deals with social cohesion.”

Aside from his natural territory of counter-extremism, Maajid seems most passionate about housing. He mentions a couple of times that he himself couldn’t afford to buy here. The Liberal Democrats, he tells me, have pledged to build 300,000 new homes although he’s not sure over what timeframe. His personal view is that housing is such a critical issue in the country that there should be a cabinet level minister for housing so someone is accountable. “That’s not a Liberal Democrat suggestion, that’s a personal me suggestion, which I’ve invented but I hope someone takes it up!”

On the spare-room subsidy aka the ‘bedroom tax’, he’s very clear that both the Conservatives and Labour have got it wrong. “There is an issue when we have such an acute housing crisis. Why should someone who’s single have a two-bed flat if they’re not disabled? If they don’t have the need. Labour is in this precarious position where they recognise there’s a housing crisis but they don’t want to flip that so that someone like me, in a 1-bed, should get a bigger place if I had a kid and was in council housing. Labour hasn’t addressed that need, and the Tories haven’t addressed the fact that someone could be disabled or hasn’t been offered alternative housing, but still gets turfed out. So we’ve said, if someone is disabled then they’re exempt. If they’ve volunteered to downgrade and they haven’t been offered an alternative, they’re exempt. But if they fit the criteria, if they’re not disabled, if they’re offered suitable and adequate accommodation to downgrade and they refuse then they have to pay the subsidy.”

Of course the challenge of this is always the geographical element – if the alternative offered is not local, or even in the same part of the country, do tenants still have to take it up to avoid paying?

“I don’t know if the policy goes into that level of detail, but that’s obviously worth looking at.”

One challenge Maajid faces is the accusation that he’s so preoccupied with national and international issues that he lacks sufficient knowlege and interest in local matters.

“The Liberal Democrats have a reputation for being the best at local stuff and I don’t have that reputation.”. His spin on this is to suggest that the ideal scenario is therefore to have a candidate like him who is big on larger issues, supported by a very strong team locally. “We’ve got the Flick Reas and the Keith Moffitts who do know the local stuff inside out.”

Whether Fortune Green councillor Flick or former West Hampstead councillor Keith are willing to do the local grunt work while Maajid pops up on Newsnight isn’t clear, but what he’s suggesting is that a vote for him is a vote for the whole Camden Lib Dem team. “It’s the package”, says Maajid.

Given the hammering the local Lib Dems took at the local elections last year, losing five of their six councillors in West Hampstead and Fortune Green, one wonders whether the “package” is an appealing proposition to voters or not.

The final question: Why should I vote for Maajid Nawaz?

“A vote for me is a vote for hope, for unity, for showing what can change, it’s for reinvigorating liberalism and the democratic process and for trying to enthuse young people. It’s a vote to revive our belief in the system and it’s a vote for someone who will speak his mind and stand on principle even if it means joining a party that had no chance of forming government when he joined it.”