Welcome back West Hampstead and Happy New Year! After the extended break, there is much news.

Expect the trains and buses to be VERY busy on Monday as many Underground stations are closed because of a strike through to the end of the day. Here is TFL’s advice.

There is a trial at the old Bailey over an alleged stabbing and rape that took place in the cemetery in July last year.

Not sure if it was the sixth day of Christmas or not but there was a swan a-swanning in West Hampstead. Locals rallied round to protect it, and the Swan Sanctury in Shepperton came to the rescue. The swan was released the next day. In time for Christmas. 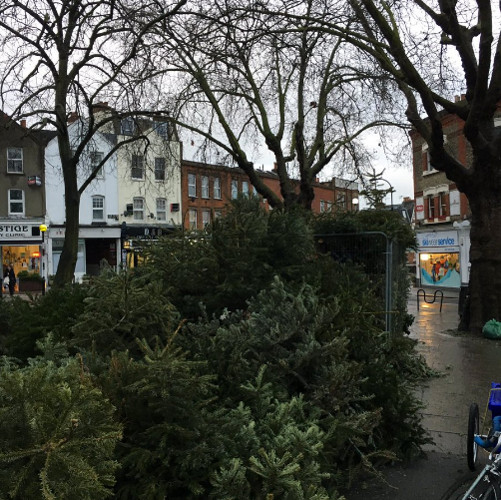 A pine forest on Fortune Green at the Christmas tree recycling point. As spotted by @JfmJm.

A timely reminder that you can recycle your Christmas trees at Fortune Green or Kilburn Grange (Messina Avenue). NOT West End Green, or just dumped on the street.

If like WHL you’ve added a few pounds (Ed – kilos) over the holidays then you’ll want our round up of the local exercise options.

156 West End Lane is not scheduled for the January planning committee. Maybe February? There was some extra time for comments over Christmas due to new information about sunlight and shadows. We shed some light on the matter.

As a unexpected Christmas surprise, Network Rail came to West Hampstead to discuss the overgrown Black Path, here’s a report from our Black Path correspondent. And as an extra bonus Network Rail also brought along two guys to cut back the worst bits.

Camden’s local area forum is this Monday (9th). It’s a public meeting open to all, and a chance to meet your councillors. Camden is set to announce new waste collection arrangements (fortnightly black bin collections and charging for collecting green waste)

Work is starting in earnest on West Hampstead Overground. Apart from building work during the days there will Sunday overnight work; track survey works tonight and hoardings next Sunday. The contractors promise both will not be noisy. WHL will be doing more on the works to remind you exactly what is happening and when.

Nazarin Zaghari-Ratcliffe, held in an Iranian prison for spying, appealed against her sentence last week. Her friends and family are awaiting the judgement.

Did you know West Hampstead’s link to the Cambridge spies? Philby, Burgess, Maclean and Blunt all had local connections

In other historical news, the great-great niece of the Short Brothers has started fundraising to repair the graves of these pioneer aircraft manufacturers. Their grave is in the cemetery (although it’s not clear if they lived in Ranulf Road, but their mother probably did).

In case you missed it, before Christmas we got an Insight into the Sherriff Centre.

Kilburn Station is getting a pop-up Library.

Local Stephanie Dawson is trying raise money for her mother who after being diagnosed with cancer and had to sell her caravan.

There is fundraising effort to repatriate the body of the Ecuadorian man who died in the Willesden car crash last month.

Meanwhile, Mill Lane welcomes The Wag Club, and a vape store. Not so sure about the last one.

Dallas Cowboy Jack Crawford, born in NW6 no less, is in the NFL play-offs.

A timely reminder for all you heading to the gym

Note to guy at @TheGymGroup in @WHampstead in full, skin tight, desert camouflage, boots & silver choker. Unfortunately we can still see you