This week Ballymore agreed to take down the huge sign it had put up without planning permission. ‘Ballynomore’, as we quipped.

Staying with Ballymore, West Hampstead Square (a.k.a. Heritage Square) opened proper. Maybe it’s the weather, but it looks a bit bleak, non? plus the three London plane trees are planted too close together. And the new benches round them didn’t quite attract the ambience hoped for…

Finally – looking to move? There is a penthouse at West Hampstead Square available for only £2.1 million. Maybe cut your offer price though as prices are edging down for flats in the new local developments.

Indiana Jones’ connection to West Hampstead. Who knew!? Our local historians that’s who.

Graffiti 1 – tag on Billy Fury way can’t be removed without damaging the mural. Sad.  Does someone know the perpetrator? Hint- he’s called Kevin

Graffiti 2 – some rather odd graffiti appeared on the Barclays cash machines. Apparently, airplane contrails are part of some conspiracy to control the weather… 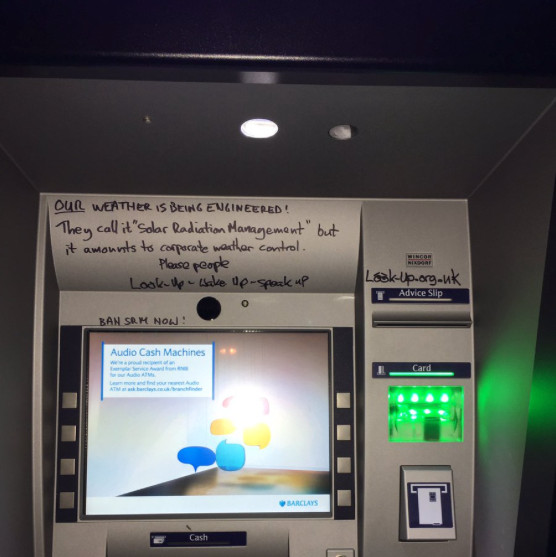 Changes at the helm of the Neighbourhood Development Forum. James Earl is to be replaced by new co-chairs Nick Jackson and former Cllr Keith Moffitt.

Application in to turn basement and back part of Bake-a-Boo into a flat. Basement OK but back part too makes retail unit too small? Save Mill Lane!

Expect some partial closure of West End Lane for Overground redevelopment. Closer inspection of this table is rather confusing but jist is partial closures coming up.

Another theft by someone on a moped locally.  Don’t flash your mobile (or headphones).

With all the fuss about the Tories breaking their manifesto pledge on no National Insurance increase, a reminder that in the last Camden Labour manifesto: no charges for rubbish collection and  continue weekly collections…

The new bins have started arriving and they are huge. Quite how people are supposed to store them plus recycling wheelie bins hasn’t really been thought through.

Community Association quiz was a success, part of their ‘Go West’ Hampstead initiative to bring West Hampstead together – next time will be in Emmanuel Church as they will need a bigger venue. Next event second barn dance – yee haw!

The London Quilters are back for the 8th year at Swiss Cottage Library. One local recommended the exhibition – and she’s right – they are stunning. Worth a detour.

Thank you and farewell to Charlotte Green who ran the Whampsocials for us over the past year.  But welcome our new social mavens; Adrian and Emily.  Watch out for the next Whampsocial coming up soon.

Cat stuck! but the police came to the rescue – cat saved! Phew.

Had to do a double-take. Thought this gentleman on Kilburn High Road had the new Samsung Bananaphone. Turns out he was just answering his Nokia while holding one of his 5-a-day (or is it 10?)

Out with a bành: Pay what you want on Ladudu’s last day