Tag Archive for: The Art of Failing

You are here: Home / News / The Art of Failing 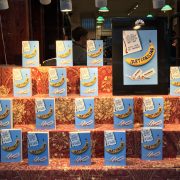 Local author Tony McGowan’s new book ‘The Art of Failing‘ is described by the publisher as ‘A laugh-out-loud chronicle of one man’s daily failures and disappointments, set in West Hampstead‘.

He has a book reading coming up at West End Lane Books on Thursday this week, so we popped by for a cup of herbal tea to have a chat. Tony couldn’t actually find a herbal tea bag, so the following events took place over a cup of hot water with a measly slice of lemon.

The book is in diary format and according to his agent was ‘not an obvious book to publish’ as it is a series of Facebook musings turned into a book, but published it was, with a book launch last week at Daunt books in Marylebone. 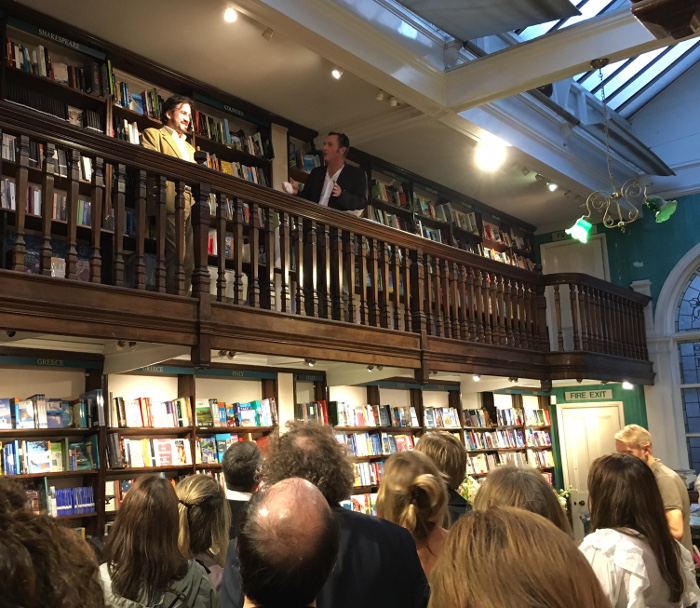 ‘Don’t cry for me, West Hampstead. The truth is I never left you.’ Pic: at the book launch at Daunt’s Books

How did it come about?

“Well, my personal writing style is observation and a touch surreal so I needed some space, but I was interested in writing something over social media. As Twitter is only 140 characters, Facebook seemed the natural choice. Quite early on I realised that the ‘likes’ (which became quite addictive) offered a feedback loop on what was popular so it helped shape things. So the musings on cricket, for example, had to go!”

The book appears to be a diary or journal, but a lot of what happens seems bizarre and extraordinary. How much of it is true?

“All of it to some extent, much is as true as I could make it, there is a kernel of truth in all of it.

For example, take the dwarf doppelgänger called “Heimlich” who I encountered one evening when I was out walking the dog. Suddenly I heard this panting and pounding sounds behind me. I turned around and there he was. I stared at him, he stared at me, but then ran off. When I got home I told my wife and kids about him and they said ‘nah’, but I occasionally saw him after that and yet they continued to think he was figment of my literary imagination. This ties into another strand of the book about my marriage being under strain by increasing weirdness during that period. When that was over I was out with my wife and daughter and we ran into Heimlich; we all saw him. So they realised he did exist and yes they agreed he did even look a bit like me, just smaller.

My approach is to look at the world in a different way, even at mundane events, so even something usual becomes a new thing”.

For a book that is supposed to be funny, some parts are quite sad/poignant. Does the sadness undermine the humour?

“Part of the narrative is the disintegration of my character and my isolation from my family – it’s exaggerated of course, but it came after a successful period and things felt a bit flat, my career seemed to be heading downhill. Yet the comedy comes from that – it has an edge. However, the reviews and feedback I have had tended to see only the humour. As writer (or artist) you create what you can and put it out there, you can’t control how others react”.

Your family appears in the book. How do they feel about that? Especially the fearsome Mrs McGowan*…

“The kids are fine with it, they drift in and out of the text. My wife Rebecca plays a more central role so that was trickier. She can appear hard and cruel but is also rather beautiful so that was OK. I’ve discovered that way round is fine for people I write about, but not vice-versa”.

(* I was at university with Mrs McG and we nearly went out, except she turned me down. How different history could have been.)

What else have you written?

“I written a number of books for teenagers. The ‘Donut Diaries’ is a comic trilogy set in the north of England where I grew up.  The other books are all stand alone novels; ‘Hellbent’ about a teenager who dies and goes to hell – it’s a comedy, ‘Jack Tumor’ about a boy who discovers he has a brain tumour and keeps hearing voices. It’s inspired by Henry IV with the tumour playing the role of Falstaff. I’ve also written ‘The Knife That Killed Me’, which tackled teenage knife crime and was made into a film”.

In some ways the book is a love song to West Hampstead.  What are you favourite things about the area?

“What are my little stations of the cross? Well there’s Hampstead cemetery, the best open space in the area. It has everything; wilderness, history and a sense of poignancy of the graves. Each one is a story.

I’m also a big fan of the charity shops as a collector of first editions I’ve found a couple over time. Socially, a recent find is Tannin and Oak. Plus a long standing favourite where you often find me and Mrs McG having lunch is the Wet Fish Cafe. I used to go a lot to the Czech (and Slovak) Club but that’s tailed off.  And of course there is Lately’s.”