It’s Tuesday morning in Labour’s rather basic campaign office on the Kilburn High Road. Glenda is discussing campaign strategy amid piles of envelopes waiting to be delivered. A large Hampstead & Highgate peace banner hangs from the ceiling. I wonder how Kilburnites feel about that as I wait.

Over a coffee in the back room, Glenda Jackson sets out her prediction for the election. “A Labour government, with a much reduced but workable majority. But there’s a long time between now and next Thursday and many things can happen.” She’s right. The next day, Gordon Brown has his run-in in Rochdale. 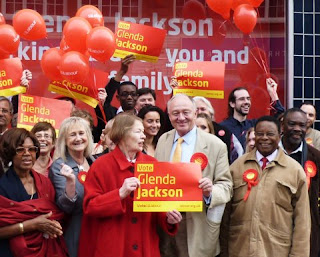 Of course, Labour’s MP for Hampstead & Highgate for the past 18 years is unlikely to predict anything other than a win for her party. As for her own position, she is “perfectly prepared” to accept that this is a three-way race. This marks a change from some weeks ago when she was in the only-the-Conservatives-or-Labour-can-win-here camp. But denying the Lib Dem’s surge nationally, or Ed Fordham’s strong candidacy locally would now seem disingenuous.

Competition aside, how does this campaign differ from previous years? “There is a huge buzz on the street. People know it’s a very serious election and are taking it very seriously. On the specific local issues, the overwhelming issue in this constituency is the lack of affordable social rented housing. And there’s the perennial issue of planning. People here are very concerned about maintaining open spaces. You do see the benefits of government thinking – not only acknowledging the importance of open spaces as breathing spaces, but also as places where children can play in safety and as part of improving health.”

Perennial issues are one thing, but how is the double Oscar winner being received herself? “I’m pleasantly surprised at the reaction to me and the Labour party. There have been attacks on me personally by my opponents, which has never happened before, on the issue of me never doing any work.” The Liberal Democrats have branded Glenda “the least active MP in London” on the basis of her mentions in Hansard, where she compares unfavourably with Brent East’s Sarah Teather in particular.

She has defended her position at hustings and, after expressing outrage at the accusation, reiterates her point here. “I don’t need to stand in the rain,” she says, referring to Ed’s oft-used line about his lobbying of TfL over the Jubilee Line closures. “I can pick up the phone. There is a difference between achieving and doing a press release”.

I suggest that perhaps it’s an issue of visibility. “I can only go on what I do,” she says, frustrated, “and if it isn’t particularly visible, well there’s nothing I can do about that. A lot of the stuff I do in the constituency, such as visiting schools or mental health daycare centres, although I think it’s important I don’t think it’s necessarily newsworthy.”

She admits to finding it a bit disconcerting when the image is more important than someone’s actual presence. I suggest that visibility and broader engagement through modern tools such as YouTube and Twitter might be one way to counter people’s impression that she is not active. “I have a Facebook and a web,” she replies before (unneccessarily some might suggest) pointing out that she’s IT illiterate. It seems the benefits of modern political communication methods have not won her over although after the interview she asks more about Twitter.

She raises herself another criticism levelled at her by opponents: her decision not to live in the constituency. She argues that London constituencies are interdependent anyway, that she frequently spends every day of the week in the area, and that constituents’ concerns extend beyond the boundaries.

The final issue that has been a thorn in her side this campaign is her age. She is 73, and one journalist was brave (foolish?) enough to suggest that – should she win – she’d be a walking by-election. Her response then is her response now. “I found it absolutely outrageous given that we’ve just passed an Equality Bill and I thought we were doing away with these kind of ‘-isms’. She says she was reselected for the constituency three years ago and has never thought of changing her mind although this would be her final term were she to win.

So, what leads her to think that an outright Labout majority is possible when the polls suggest otherwise? “My reading on the street is that the underpinning for this election is the economy, and this delicate recovery has to be looked after. And the other thing I’m getting is that people don’t regard this as a broken Britain. The greatest natural national resource this country has is its people and their imagination, creativity and adaptability. There is this sense that when this country is in tough times we pull together. We’ve done it before and we’ll do it again.”

She is also an ardent supporter of Gordon Brown, and claims that she encounters similar support for him on the doorstep. “Honesty is a big word that comes up”. She also says people comment on Brown’s solidity and how Cameron and Clegg seem like little boys in comparison. “You think about Mr Cameron going to Europe and negotiating for us, with the people he’s lined up with… it’s crazy.” Her lack of conviction in Cameron is palpable.

“I know Gordon extremely well, and I’m absolutely stunned at the endless litany of abuse he gets. You couldn’t be more authentic than Gordon Brown. He is passionately committed to this country, to the Labour Party and to its founding principles of equality, opportunity, and social justice. I’ve had serious arguments with Gordon, not least on 42 days [the proposed time suspected terrorists could be held without charge], which I voted against, but he doesn’t bear grudges and he values debate.”

The bookmakers have her as third favourite in Hampstead & Kilburn. If she loses, what does she fear will happen? “It would be the neglect of the most vulnerable. We’ve already seen [with the LibDem/Conservative Camden council coalition] costs increasing for pensioners, the removal of 24/7 care in sheltered housing, funding slashed for youth services. They’re protesting they wouldn’t take away the Freedom Pass, but I have my doubts.”

Referring back to the issue of affordable social housing, Glenda cites the situation in Hammersmith & Fulham. “I believe the chair of the council [Stephen Greenhalgh] is the Conservatives’ housing guru. They are deliberately destroying social housing because they don’t want mixed communities, they want to ‘sweat the asset’, which is the expensive land.” More broadly she argues that we would lose a fifth of our SureStart centres and “in a nutshell, it would certainly be those who most need government support who would lose it. That’s the Big Society idea, what it really means is charities and the voluntary sector and if you don’t meet their criteria, tough.”

The passion in her voice rises. “To turn back what we’ve managed to achieve after those two home grown recessions of the Conservatives… the schools in this constituency have been genuinely transformed from when I was first elected. And to think that we would have millions of British people on the dust heap…” her voice trails off in quiet anger. “The Conservatives may protest they have changed but they haven’t.”

Her commitment is evident and her drive undimmed judging from the glint in her eyes when she is fired up. Whether it is enough to get her the votes she needs is far from obvious. So why, in a sentence, should anyone put a cross next to her name. “I always become a shrinking violet when I’m asked these questions,” she replies, causing a look of mild disbelief to cross my face. “Contrary to popular opinion, it’s the constituents more than the constituency that dictate the work of an MP. That’s why it’s so humbling.” She actually says a lot more. It certainly isn’t a one-sentence answer as she talks about political movements, voting against her own party, and the relationship between an MP and constituents.

I ask her again to complete the “I should vote for Glenda Jackson because…” sentence. She utters a slight sigh, implying that slogans and soundbites hold no interest for her. “What you see is what you get. You know what my political affiliations are, and my commitment to these people in this constituency is absolute. They take priority.”

Should she lose, what next? She replies, deadpan, “I have a fantasy that I’d be a jobbing gardener.”

Will the people of Hampstead & Kilburn decide to send her on permanent gardening leave, or will this at times formidable, at times deeply personable and passionate woman be given one final opportunity to be our MP? You decide on May 6th.