Barraco will never be somewhere that picks up much passing trade. From whichever way you approach it, it takes a leap of faith to believe that there’s going to be any commercial businesses at all, let alone a half-decent restaurant serving up a slice of Brazil on this residential back road. 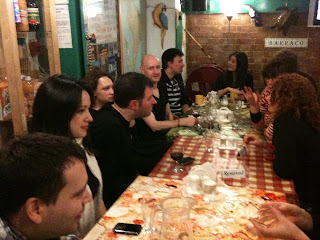 As this was to be the last #whampreview of 2010, I decided that I would abandon the famous hat from which names are plucked and everyone would be able to come. Thus it was that 12 of us squeezed into the street-level ‘front room’ of Barraco, which sits somewhere between a restaurant and a café. The kitchen is a few steps below, and there’s also a large back room for live music, parties and presumably those occasional very busy nights.

Which this was, for we were sharing a rather small space with a party of including actor Joe McGann. Barraco isn’t your obvious celebrity haunt, nor did it seem quite prepared for two large groups who had both booked. Some judicious rearranging of tables happened and the beers and caipirinhas began to flow. 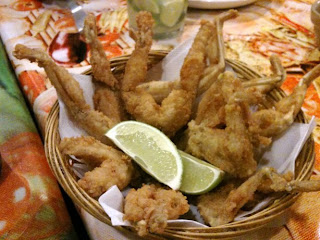 We opted for a selection of starters to share, including (at Lauren‘s request) frogs legs, fried yam, chicken gizzards, which I enjoyed, prawn rissoles and breaded cheese balls (“a bit Kerry Katona”, said Nicky). Perhaps the best starter was the grilled Brazilian sausages with onions, which really could be a meal in itself, and which Moya declared “divine”. 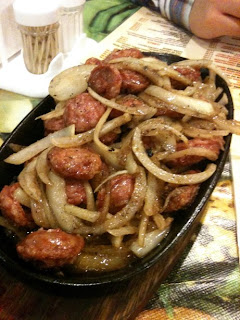 Barraco is unashamedly Brazilian. I’d certainly like to imagine that the ambience here is going to take Brazilians in London straight back to the land of samba. It’s not chic. We have bright plastic tablecloths, there are Brazilian flags and a large map of the country on the wall. There are cabinets full of brightly coloured packets of food. It’s bright. Very bright. It is the most common criticism of this friendly establishment. It’s not a place for a romantic candlelit dinner for two.

Most mains come with a choice of two sides – this is not a restaurant you’ll leave hungry. The tilapia cooked in coconut milk divided opinion – Jane was underwhelmed, Richard thought his was well cooked although it wasn’t that hot. Ria and Tom‘s white fish was too salty but, in Tom’s words, “respectfully cooked”. In fact, universally the food was deemed too salty. 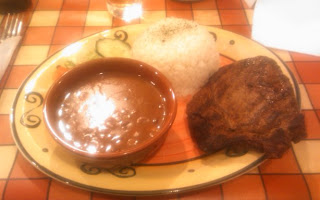 Large bottles of what looked like brown sugar were placed on the table. It turned out to be farofa – a Brazilian seasoning – that only Mark tried.

The moquecas (a Brazilian fish stew) looked good and were “hearty” according to Moya. The rest of us went for steaks, My ribeye was a little undercooked in the middle, despite the waitress being insistent that I had it medium. It tasted good, but looked like it had suffered from freezer burn. The side of beans was really good – in fact a meal of just the sides would be quite appealing. Sarah E, Sarah W and Dominic also went for steaks, while Mark splashed out on the monster T-bone. 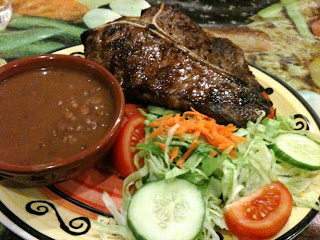 There was barely room for desserts, although that didn’t stop some of us from indulging from the offerings from the chiller cabinet. 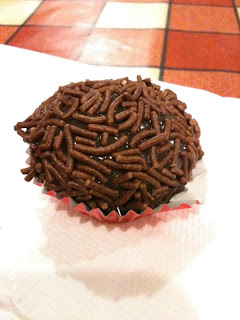 I thought the kitchen and our very friendly waitress did a great job of getting all the food out quickly and all together with no mistakes (I think our service score below is a little low). Barraco would be great for a quick filling meal or for a group outing (but book in advance because it’s busy and small!) – it’s certainly a great part of the NW6 restaurant scene.

Photos courtesy of Mark and Jane

Review: .45 at Hampstead Theatre Would you go to Wood Grill?