So what exactly is going on with local libraries? Amid accusations that closures have been pre-determined, a consulation process that has triggered some fierce criticism, and the very raison d’être of libraries evolving, I thought it was time to try and make sense of it all. 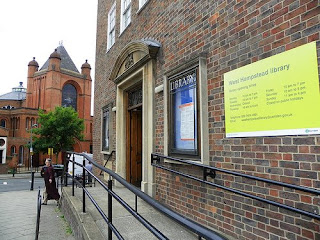 First the facts. Camden, like every other council in the country, is facing a shortfall in the funding it receives from central government of £80-£100 million over the next four years. The final number is unclear because the budget gap for the fourth year of these restrictions has yet to be calculcated. Council tax accounts for less than 10% of Camden’s spending, so even substantive rises there would make little difference overall.

Like every borough, there are services that Camden has to provide (statutory requirements) such as transport for adults to social care services, schooling etc. Everything else is discretionary and therefore could be cut. Discussion rages about where the balance should fall between cuts to frontline services and further efficiency savings at Town Hall.

Camden’s contentious budget meeting last week set the level of cuts for each department. It has been decided that £2 million of the £8m library budget needs to be cut. (The Culture department’s total budget is £14 million). At 25%, libraries are one of the more heavily affected services although almost no frontline discretionary services remain unaffected as we have seen with the proposed closure of children’s centres such as the one on Acol Road and the Netherwood centre for Alzheimer’s patients.

One criticism, levelled by West Hampstead Lib Dem councillor Keith Moffitt among others, is that the £2m figure seems to be set in stone already even before deciding how it might be cut.

Some savings have already been made. Camden’s cabinet member for Culture, Cllr Tulip Siddiq explained to me that she has already saved £400,000 in back-office efficiencies, but that still leaves a £1.6m shortfall over the four years. However, and much to her displeasure, it is front-loaded, so that £1.2m has to be found next year (2012/13).

Rumours circulated early on that Camden’s officers (the term used for what is effectively the borough’s civil service) had a plan in their back pocket to slash the library provision in one fell swoop, reducing the service from 13 libraries to just four “super-libraries”. Cllr Siddiq told me she rejected this out of hand, although it is hard to see how it would ever have gone through anyway given the level of outcry it would have triggered. Although some level of library provision is statutory, the definition is open to enormous interpretation.

Are closures inevitable? And how safe is West Hampstead library? The consultation document – especially the online version – was roundly criticised for forcing people to agree with some form of closures or major reductions in service before other options were discussed. Of course, where library passions run high this hasn’t stopped community groups getting together to discuss taking over the running of a couple of libraries. Cllr Siddiq wouldn’t say which libraries, but it’s fair to assume that such an initiative would be feasible only with the smaller libraries.

Taking over libraries – or a “community asset transfer” to use the big society parlance – could work in a number of ways. A group could be granted a long lease, say in excess of 20 years, to run the library and would take responsbility for all aspects of it. Or a shorter lease could be considered whereby Camden would retain a little more control, perhaps even providing one librarian to work alongside the volunteers, but the major running costs would come off the balance sheet without it being considered a closure.

West Hampstead, having recieved investment relatively recently would be an unlikley candidate for closure and is large enough to be daunting for a community takeover. However, it is probably wise to take nothing for granted – West Hampstead is the most expensive library in the borough in terms of cost-per-user. 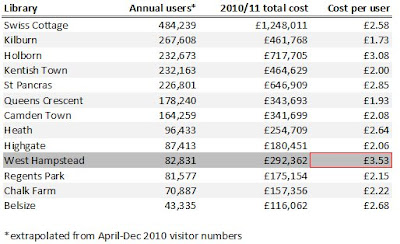 The consultation process, which 3,000 people have so far engaged with, has thrown up all sorts of other ideas both for cutting costs and generating income across the board and Camden is also working on its own ideas. Some, such as charging for WiFi access, seem to go both against the grain of why libraries are there in the first place as well as surely offering a mere drop in the ocean in terms of extra revenue. Higher library fines may be marginally more popular, but for serious money-spinning ideas then ideas such as licencing coffee shops within libraries, or perhaps a post office would have a greater impact. There’s even talk of turning some of the Swiss Cottage library space into an art gallery – with at least one artist offering to pay handsomely (and rather philanthropically) for the privelige of hanging work there.

Cutting hours at individual libraries is one option. The more costly the library is to run the bigger the absolute savings this generates. There is always a risk that reducing hours becomes a downward spiral as fewer and fewer people use the service, but at some of the mid-sized libraries it’s hard to imagine that shaving some of the quietest hours off would make much difference to users.

This really leads to the bigger question of what exactly libraries are for today. Are they book lending services, are they places for quiet(ish) study, are they a depot for information about local services, or do they offer a place for people otherwise stuck at home – young parents, the less mobile – to have some access to the outside world? The answer of course is that they are all of these things – but different libraries serve different needs.

In thinking about issues such as opening hours, Camden has to make some judgement calls on priorities. Swiss Cottage library, for example, seems to be heavily used by schoolkids and ensuring it’s open for them after school hours might be deemed more important than it being open early for young parents. These are tough choices and will almost certainly vary across the library network, but some smart thinking here could help get close to the savings required while keeping the negative impact as low as possible.

The notion of libraries as community spaces rather than just book depositories could also be taken a step further. This might mean making the library a shared services space. Imagine, for example, if West Hampstead library hosted a drop-in housing clinic at certain times of the week – especially now the housing office on West End Lane is closing. Such cross-departmental coordination is needed during these difficult times, and one hopes that council officers and cabinet members are not too caught up in their own departmental problems to peer over the fence to see what benefits could come from collaboration.

Consultation officially closes on April 4th. The findings should be made public in May and decisions ratified at the council meeting in June.