While Wimbledon drew to an inevitable conclusion and people went on strike – but they weren’t French – what happened in West Hampstead?

It was actually a fairly quiet week. The Railway had a second break-in within a month – turned out to be the same guy both times.

One of The Wet Fish Cafe’s outisde plants was nicked – there’s a reward for its return.

There was a meeting on Saturday about the plans for 187-199 West End Lane. There’ll be a report back in the evening of July 13th.

On Wednesday, Camden convened a “place shaping” meeting as part of determining a vision for West Hampstead.

Here’s more on the Gondar Gardens plans that were rejected.

Want to live on the site of music history? The Railway’s owners have applied to create 14 flats upstairs.

The Jester Festival benefitted from good weather and was a great success.

Some good photos of last Sunday’s Secret BBQ were posted.

Photo of the Week
@MaloufTeabaggy snapped this lovely scene:
“Tesco donut anyone? Good to know someone is tasting them so they aren’t poisoned” 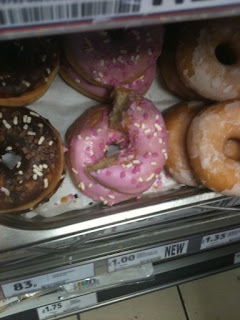 Place shaping meeting overview What have I missed since July 3rd?