Loyalty, written by Sarah Helm, is set during the run-up to the Iraq war, and around the period of the inquiry into it. She brings a unique insight into the machinations of government at this time – she is the wife of Tony Blair’s chief of staff Jonathan Powell. She is also an experienced Middle East correspondent. 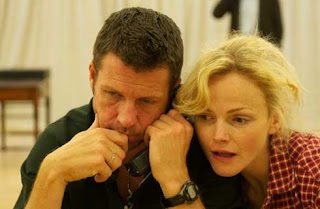 The play, described as a “fictionalised memoir“, stars Maxine Peake as Laura a staunchly anti-war journalist with experience in the Middle East who is married to Nick (Lloyd Owen), who happens to be chief of staff to a prime minister called Tony (Patrick Capaldi). As you can see,
the fictionalization only goes so far.

It’s a compelling play with some chilling moments and a genuine sense of internal conflict. Peake starts off perhaps too shrill, but settles into a more believable character that balances excitability with a sense of conscience and inquiry. Owen, understated throughout, is a convincing foil. Capaldi musters up a rather enjoyable Tony Blair, cutting something of a tragicomic figure throughout.

There are some poignant scenes that resonate very strongly today – Murdoch pops up at one stage telling Tony that war is the right decision. This leads to some lines getting laugh where perhaps laughs weren’t intended (unless such scenes have been hastily added in light of recent events).

Edward Hall’s production is pacey, especially the second half, with good sets and a strong supporting cast. I recommend it.

Iverson Road garden centre to close? What have I missed since July 11th?