All this weekend, La Brocca is celebrating its 20th birthday. Moya “Scoop” Sarner, spoke to the owner: 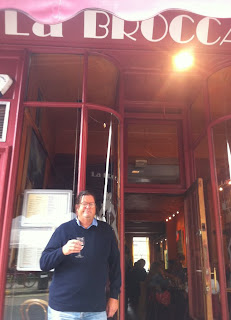 The impressive figure of David Locke, usually found dominating a bar stool of West Hampstead local La Brocca, is familiar to many of us. He opened the restaurant 20 years ago today, and one of his first customers was his granddaughter Yasmin, then a baby in a moses basket. Today she’s the warm, sparky brunette, working as a waitress in the bar upstairs. It’s very much a family business, as he explains: “My wife Edda does all the hard work in the back office, our daughter Laura is the manager, and I’m in charge of ‘marketing, strategy, and drinking'”. Sounds like a damn fine strategy to me.

The bar is much the same as when it opened – but the area certainly isn’t, he says. “West Hampstead has changed totally in 20 years. There wasn’t much here back then, but it’s grown more and more upmarket. When they opened the Jubilee Line through to Canary Wharf [in 1999], all the pine doors and brass knockers appeared, and property prices doubled”. That’s reflected in more sophisticated tastes – so the bar sells more champagne and prosecco, and the restaurant has branched out from pizza and pasta into meat, fish, and other specials. But, he is quick to point out, “West Hampstead is an amazing place to live. Although it’s gentrified a bit, it’s nowhere near as up itself as Kensington or Chelsea – in my view, it’s still one of the last villages in London.”

The regulars – and they are many – haven’t changed at all. Take the two white-haired gentlemen who rarely leave their window seat. “Pen and his friend Peter started coming in about 10 years ago, for lunch,” David says. “Now they’re addicted and come every day. They have two large sherries, a bottle of red, three large green chartreuses and two courses – I hope I’m doing that when I’m 87!”

And there are celebrity customers too, from the Crediton Hill mafia’s Emma Thompson and Imelda Staunton, to rugby and cricket stars including Ricky Ponting. “And one afternoon”, David continues, “I strolled in to find Peter O’Toole sitting at the bar, with his sparkling blue eyes”. Then there are the well-respected jazz musicians who started off at La Brocca’s Thursday night jam sessions, friends and students of our very own local musician and teacher @cyberdonkey, aka Simon Whiteside. Many are now big names, like jazz pianist Gwilym Simcock, Mercury Award nominee for best album, just pipped to the post by PJ Harvey. “The jazz is a love”, David explains, “but it doesn’t make me money. You want to know how to make a million pounds out of jazz? Start off with two million.”

Jokes aside, David glumly says that La Brocca is not immune to the effects of the economic downturn. “Our turnover’s gone down 15 to 20 per cent over the last couple of years. We’ve had to cut back on staff and wages – we’re okay, but life isn’t as much fun as it used to be.” But David still seems to be having a pretty good time, as do his customers. “Loads of couples have met here in the bar,” he says (at this point I decide to spend even more time in La Brocca). “They get married, and they all come back to see us with their kids. When we first opened, I was maitre d’, and trying to get rid of a couple who were, shall we say, lingering. It looked to me like it was a blind date, and they were deciding whether to go off together or not. So, eventually, I said ‘Ain’t you got no homes to go to? Ain’t you got a bed?’ The best thing was, the guy was called Mr Rutter! Anyway, they came back six months later, married, and they’d brought me a little model of a double bed. ‘There you go’, they said, ‘We’ve got a bed now!'”

Don’t worry folks, despite the tough economy, La Brocca won’t be going anywhere soon. “I want my daughter Laura and the next generation coming up to carry on running the place”, David says. “That portrait of me on the wall is about 15 years old – I hope it stays there for my grandchildren and my great grandchildren – for at least another hundred years.”