After a £3m redevelopment, the Odeon at Swiss Cottage is reopening its doors on Friday 16th September. New features to the 5-screen, Art Deco venue include north London’s first IMAX screen and, at the top of the building, a large bar area called ‘Ambar’. 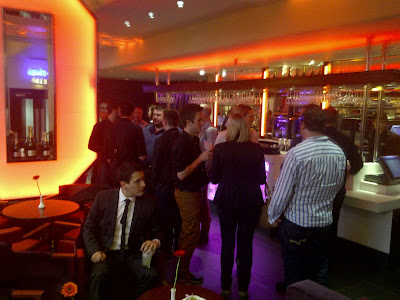 The first thing that strikes you is how bright and welcoming the cinema now is, it has benefitted from the lick of paint and feels modern and fresh. Reassuringly, it is still the labyrinth of old, with the narrow staircases and never-ending corridors, but unfortunately the large “retail” area that dominates your eye line on entry is still American in both look and feel.

The new bar area upstairs is a very welcome addition.It’s spacious and comfortable and works as a meeting place. Odeon is offering 30 different types of wine as well as a selection of appetisers and desserts here. If you were being cynical you could say it is a blatant attempt to take a larger share of their customers’ wallets, but I would rather spend my extra dime here, than on some popcorn and a drink downstairs.

The other major change is in the nature of the cinema’s five screens. They have been split into three distinct groups. The Imax is an impressive state-of-the-art facility that will show modern classics (Dark Knight, Inception) and Imax events. Two of the other cinemas are standard multiplex screens with 100 or so seats. The third and most interesting category comprises the two ‘club’ cinemas, which will house 60 guests and offer a premium experience (think Everyman in Hampstead).

I was impressed overall and will return, however I did have an issue concerning the film rota strategy and pricing.

In a normal week, the four non-Imax screens will share only three films. One each for the first multiplex and club screens, and then a third will show in a standard multiplex screen and in the second club screen.

This, coupled with the pricing strategy (10.75 Adult std vs. £16 Adult club) looks slightly misguided and overpriced. A comparable club ticket at the Everyman in Hampstead or Belsize Park is £13.

So, overall, the Odeon Swiss Cottage has made a welcome return to the neighbourhood and is a great place to watch film. However if you’re pushing the boat out for a premium experience there are cheaper options available.