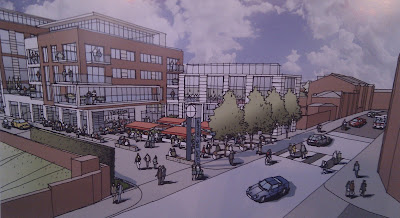 On Saturday, architects John Thomson & Partners held an exhibition in the church hall on Sherriff Road to show their latest proposals for the strip of land that slopes west from West End Lane between the tube lines and the Overground lines and is currently fronted by the parade of shops including Café Bon, Rock, and Peppercorns.

The amended proposal will house 200 flats, with a mix of 1- 2- and 3-bed apartments (the majority being 2-bed), along with some affordable housing, giving a total population of around 500 people. The affordable housing (all tucked away at the far end of the site away from West End Lane) comprises 30% of the total floorspace, although I understand that the council stipulates 50% of floorspace should be affordable housing.

The proposal is for six blocks of flats, each separated by green space – some of which will be accessible to residents only, and some of which will be small park space. The block facing onto West End Lane, behind the “market square” (remember this would be private space masquerading as public space) would be 5-storeys high. The next one back 7, then 9, then 12, then 9 then 7. To give some context, the highest buildings along West End Lane at the moment are 6-storeys high – most are four or five. [update: i was initially told by an architect from JTP to my face that the tallest building would be 11 storeys. It was only under some pressure at the public meeting the following week that they admitted that from the ground level, it would be 12. Such disingenuousness does nothing to win residents over]

We heard a few technical things, such as that that buildings would be on springs – as used in earthquake zones – to absorb the vibrations from the passing trains and that ventilation would be provided so windows wouldn’t need to be opened. The buildings would be predominantly brick. But I think for most people, the materials and technical specifications weren’t the issue – the size was. Some artists impressions of what the site would look like from West End Lane made good use of tree cover to minimize the impact – trees, for example, owned by Network Rail and that could be chopped down at any time. 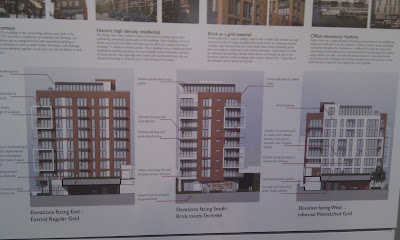 In all honesty, it seems very hard to imagine that the council is going to pass an 12-storey building, or even a 9-storey one. One option would be to have all the buildings at, say, 7 storeys. This might look even more monolithic though. I wondered whether the developers (Ballymore) and architects have already built this into their equation – a reduction in the number of private flats would increase the proportion of affordable housing to the statutory requirement.

There will be more retail space than the site has presently, although some will be on a first floor level, rather than directly on the street. There is also a space large enough for a small supermarket, and apparently Partridges has expressed an interest – although this is all very early days.

There is a public meeting on Wednesday about this, where the architects will present their proposals and take questions. I strongly suggest that if you are interested/concerned/delighted/offended about the idea then go along. Two things to bear in mind: a) no plans have officially been submitted yet; b) this land will be used for housing. You may also want to come the local Area Action Group meeting where the issue of a Neighbourhood Development Plan will be raised.

One thing that would be nice (if you’re reading this Camden) is for the consultation area to extend to Broadhurst Gardens area. A woman I was speaking to at the event lives on that road and had no idea about this exhibition until a friend mentioned it to her, despite the fact that she lives much closer to the site than many other people in the consultation area.

(What would be REALLY fun is if the student accommodation building on Blackburn Road, and whatever ends up being built on this site, are being thrown up at the same time. You think the traffic is bad on West End Lane now?)

Spiga pulls out all the stops Change of rhythm