On Thursday, 24 of us took over Broadhurst Gardens’ newest restaurant Osteria Spiga in the latest (and largest) edition of #whampreview.

With so many of us, we staggered the tables over the evening and Tom and I had selected a slightly shorter menu than Spiga’s full offering although there was still plenty of choice.

We received a generous complimentary glass of prosecco on arrival, and there was bread and olives on the table. Starter portions were sizeable – Anna was sceptical as to whether we were receiving “critics portions”, but from my previous experiences at Spiga I think we were getting the usual dishes. Over the course of the evening, despite a few errors and inconsistencies, it was obvious that there was skill and flair in the kitchen, and the evening was a great success with the vast majority of food receiving glowing praise.

The wild mushroom and poached egg starter (£4.50), especially popular on my table, was certainly a whole lot of mushrooms on a plate. It was “lovely and garlicky” according to Nathan, if “very rich” as Adrian and I both thought. June “thoroughly enjoyed it”, but Alex wasn’t sure whether the poached egg really went with the mushrooms – both parts cooked well, but did they merge together successfully?

Poached egg featured with the asparagus starter too (£5.50), which was the most popular dish on Tom’s table although there seemed to be a few egg issues with Tom’s and Doron’s a little undercooked while Rajiv and Ryan’s was perfect – everyone loved the asparagus though.

Those who opted for the cold meats platter (£5.90) were presented with an enormous wooden board of hams and salamis along with smoked mozzarella (“amazing” said Lauren) and Will cleared his board proclaiming it “excellent”. Eugene thought it was well presented and agreed the portions were generous. In fact, this is really large enough to be a sharing plate. 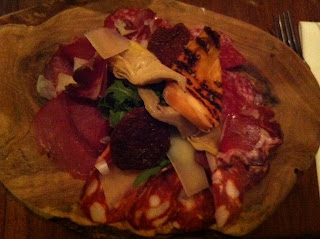 Claire T loved her smoked salmon salad (£6.30) “a delicious combination of smoky oily fish with creamy mascarpone” and Tom, who tried a bite, reckoned he’d happily have it as a main course with some bread.

The fried goat’s cheese (£5.20) was also a potential main course. Rahki said hers was “very tasty” and Amy said it was “substantial and rich, but it could benefit from more balsamic to balance the flavours”, while Mark looked on enviously.

Matt and Emily (perhaps ambitiously) opted for risotto (£5.50) as a starter. Matt liked the “delicate flavours” and said the “asparagus really shone through”, but admitted it was “too big for a starter”. Emily liked the “creamy texture”, but would have liked a grating of parmesan on top.

After starters came a complimentary pasta course – perhaps a course too many for some of us. It was a pumpkin and amaretti ravioli (two pieces) and an accomapnying ladleful of gnocchi in a tomato sauce. The ravioli divided opinion – it was on the sweet side for most people, but the almond flavour came through. “It tastes like Bakewell tart” said Mark and Anna, while Alex and Stefanie thought it a “bit too marzipanny”. The gnocchi was more of a hit – I’m not a great fan of gnocchi but I could have happily eaten a bowl of this for a main. All in all, a mixed success, although the generosity was definitely appreciated. 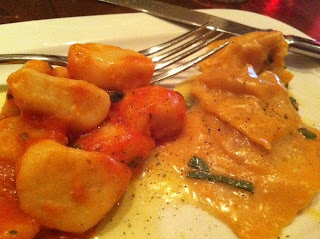 Already quite full, the main courses started appearing. The duck in orange sauce (£9.80) was a popular choice although several people thought their’s slightly overcooked – in Claire T’s case, enough to send it back although she raved about her replacement calling it “sweet and fruity” and she said the duck leg croquette was “amazing”. Matt and I found the sauce a little too sweet, but Claire J said it was perfect and Phil enjoyed his, while Ryan liked the “top notch presentation”. The croquette divided opinion – I felt mine lacked depth of flavour and perhaps was underseasoned. June was pleased with her rare duck – cooked as she wanted. 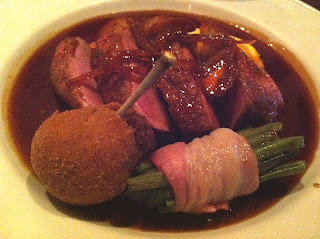 Nathan went for the vegetarian version of the Fagotini (£8.00), which did have to go back to the kitchen after a misunderstanding led to the first attempt having bacon in it. When he got the right one he thought it was “quite nice, but slightly bland”.

Rakhi and Tom went for the gnocchi – Rakhi sensibly opting for the starter size (£5.80). She found it “tasty”. Tom’s main course portion (£7.80) was a “nice wholesome dish with delicate flavours”, atlhough both of them thought it needed more salt.

The sea bass (£12.50) looked excellent – two large fillets on a bed of ratatouille. Rajiv reckoned it was “one of the best sea bass fillets I’ve ever had. Juicy, flaky and simply excellent”. Will gave it “top marks”, while Emily thought it was “very generous, but the ratatouille is too strong”.

The steak (£14.50) was a hit, although Stefanie realised she’d now doubled up on the mushrooms after the funghi starter. It was “excellent and well presented” according to Eugene, who also liked the peas and stock side dish that comes with all mains at Spiga (and is delicious – you don’t need to order sides here!).

Nathalie loved her veal chop (£14.90) although found the size overwhelming. Adrian enjoyed it but found it quite rich and would have preferred the potatoes as a side dish rather than on the plate. Doron’s was overcooked and was sent back – the replacement was still slightly over for him, but he thought it was “very tasty”. Tom’s table, who had all three of the returned dishes, got wine on the house as compensation.

Alex gave his chicken (£9.30) 8/10, and was very happy with it, although he thought his orange juice disappointing.

Dessert menus were generally waved away – everyone was very full by this stage. Will did find room for a crème brûlée (£4.20), which looked lovely and was “really good”. Matt’s table shared a tarte tatin (£4.30) and a chocolate torte (£4.60). The tarte tatin was more popular although Anna thought it too bitter and Claire J suggested the addition of salted caramel! Matt thought the torte “unadventurous”, but as Phil enigmatically pointed out “if you order a chocolate torte you’ll get a chocolate torte”. 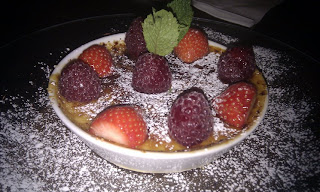 A couple of grappas, coffess and a vin santo with cantuccine made their way to my table, and of course complimentary limoncellos all round.

Matt’s table hit the Chianti Classico (£21), which they preferred to the house red. My table was on nothing but the house red (a Merlot/Sangiovese blend from Umbria), which we all thought was excellent value at £12.95, and Tom’s table also enjoyed it, while Claire T upgraded her white wine having been unconvinced by the house white. Claire J simply liked the size and shape of the wine glasses!

So that’s the food – but what about the service. It was, simply, excellent. This was a big ask for the two waitresses helped by Sandra (whose chef husband Sokol was responsible for about 75 plates of food that night), and they rose to the occasion. Tom praised the “outstanding and very warm” service and his table wholeheartedly agreed – remembering that they had the most problems. He particularly mentioned how hard Sandra worked to rectify the problems.

With so much food and plenty of wine, I think most people were surprised at the final bill. Matt’s table (drinking pricier wine) came to £33 each, my table averaged at £30 each with a bit of juggling for Alex who wasn’t knocking back the wine like the rest of us, and Tom’s table was £28.

The bottom line seemed to be that even with very minor quibbles people enjoyed it very much and were very keen to come again. The warmth of hospitality is very genuine and that comes across. I’ll leave the last word to Eugene: “fantastic service, well-run, good value – a strong example of what a neighbourhood restaurant is”.

Planning for the future of West Hampstead The only way is up…. it seems.