Those of you living at the southern end of the neighbourhood are probably already up to speed with the extensive plans to redevelop the Abbey area estate at the Belsize Road/Abbey Road junction. There has already been a public consultation on this. 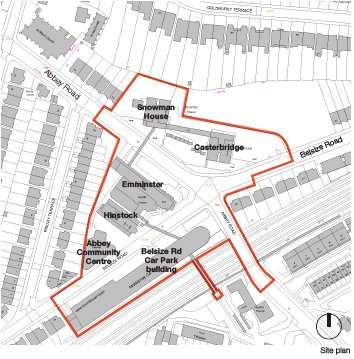 If you’re not sure what this is, The Abbey Area Redevelopment Project is a part of Camden’s estate regeneration programme approved in December 2007. The proposals involve the demolition and replacement of 70 homes at Emminster and Hinstock, a community centre health centre and some shops along with the existing Belsize Road multi-storey car park. Casterbridge and Snowman House tower blocks (the two big ones the east side of Abbey Road) would be retained with alterations proposed at the base of the buildings.

The new scheme will provide up to 299 homes including provision for larger family accommodation for affordable rent, some new homes for shared ownership and private sale.

The proposals also allow for the delivery of new community and health facilities at the base of the retained Casterbridge and Snowman House tower blocks along with new retail and business space to support the existing and new community. Here’s what the plans look like. 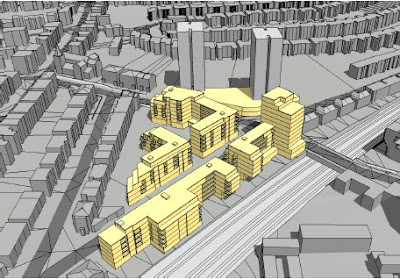 As you can see, it’s a large-scale development. Just for a bit of historical context, here’s what the site looked like in 1940. 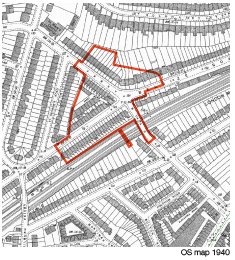 I can’t immediately find evidence that this site was bombed, but it seems highly likely given that railways were targeted. The area was redeveloped in the 1960s and 1970s, including the Grade II listed Alexandra & Ainsworth estate (aka Rowley Way), which is outside the scope of this plan. The site also is adjacent to the proposed HS2 line out of Euston, however, HS2 shouldn’t affect these current plans, which would be underway well before HS2 construction starts in earnest. (There is an issue down the other end of Rowley Way with an access shaft for HS2, but that’s for another post.)

As would be expected for a development of this size, City Hall has already responded to the plans. There are a few areas where they are non-compliant with the London plan, and the final application will have to go before City Hall and cannot just be passed by Camden. The devil here is largely in the detail. Here’s the relevant extract from the report:

“London Plan policies on land use, housing, estate renewal, affordable housing, housing choice, density, child playspace, tall buildings, design, inclusive access, noise, climate change and transport are relevant to this application. The application complies with some of these policies but not with others, for the following reasons:

Some of these issues sound a bit like dotting the i’s, but others – the child playspace and the tenure mix of units – present more of a challenge to the developers. You can read the full report here.

Camden’s planning site has all the documents related to the plan, including the reports on the retail situation – will Oscar’s Den be given first option on a new retail space? We can but hope.

Meanwhile, here’s an annotated copy of the full proposals (look out for the pages with the big green ticks, and the red outlines). Click on the title for access to the full-size version.