Local artist Martin Robertson contacted me last week to ask for my – and your – help.

Martin produces screen prints of local areas, based around what makes them great places to live. That’s the usual shops, bars, restaurants, along with anything and everything that people hold dear.

Here you can see what he’s done for Queen’s Park. 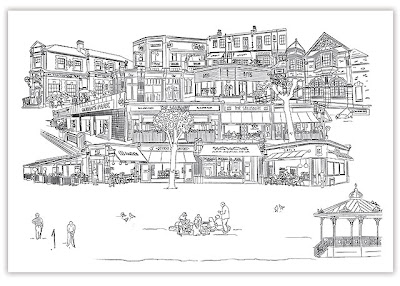 Martin needs our help to capture what it is about West Hampstead that we all love. Specifically, he wants to encapsulate the local quirks and personality of an area as the the simple day-to-day places that makes people love the area they live.

I’ll get the ball rolling with some ideas, but please add your comments below so Martin can do more than just draw on what I think!

Those are some of my thoughts, but what, or who, captures the heart of West Hampstead for you?

Whampgather IX: Sunday lunch Have your say on local planning