On Thursday night, I found myself on stage in the lecture theatre at the Museum of London taking part in a University Challenge style N v S v E v W quiz organised by London’s überwebsite Londonist. Having been asked to captain the North London team, I was seated in the traditional captain’s position of second from the right.

When I’d agreed to this I’d assumed that the other contestants would also be random people who maybe knew a bit about London. How wrong I was. Despite teams apparently being selected anonymously based on applicants’ love of their quadrant of the capital, we seemed to be facing teams with Mastermind finalists and people ranking in the top 20 in World Quiz leagues.

There were two semi-finals, with the winners battling it out for overall glory. We were up first against Team East. It was a fairly one-sided affair. My team of Mark (our only hardcore quizzer), Abby, Andrew and myself won comfortably against East’s team, captained by the Londoneer’s Pete Stean. 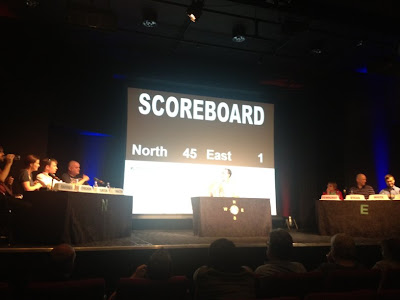 The buzz around the auditorium was that Team South and Team West were the two top teams with Team South the out and out favourites thanks to the presence of Jesse Honey, the current World Quiz champion (who knew there was such a thing?) who was also the 2010 Mastermind champion, and Paul Steeples who is also a Mastermind finalist.

For my money (and this may have been because I was in the audience rather than under the spotlight), this was the marginally easier of the three contests. South beat West fairly comfortably in the end, although the margin wasn’t as big as ours.

Despite having posted the highest score so far, there was no question that we were the underdogs in the North v South final. We held our own early on, and were able to get our fair share of the starter questions, but eventually the superior general knowledge of Pete Watts’s (The Great Wen, Time Out) team came to the fore and they consistently scored more heavily when they got their bonus questions. 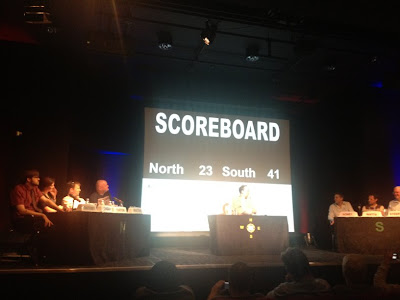 So, we lost the final, but I think we can be proud of ourselves for doing well against a team of serious quiz people. At least we knew that Hampstead was the deepest tube station on the network, though there were disappointingly no questions about the relative merits of Kilburn’s Sunday lunches or the status of local planning applications!

I believe Londonist will be publishing the questions at some stage, so I’ll add that link here and you can see how you would have done on the buzzer!