Back in May, the Friends of Fortune Green planned an outside film screening on the green. For free! It rained. Obviously.But as the weather seems to be improving, the screening has been rescheduled for this Tuesday July 24th and has now received a small grant from City Hall as part of the Mayor’s Showtime scheme.

And now you can unleash your inner Bradley Wiggins (he’s from Kilburn y’know), because this screening will be bike-powered. If you can lend a bike (and ideally your legs) on the night then please e-mail . 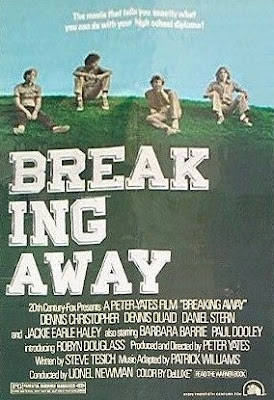 Each shift on the bike will be about 20 minutes, but you can be inspired by the choice of film. Breaking Away is a 1979 classic film starring Dennis Quaid. I’m not going to recap the plot here, come and watch the film dammit. But I will tell you that the film won the 1979 Oscar for Best Original Screenplay, and nominations for Best Supporting Actress, Best Director, Best Original Score and Best Picture. It’s also number 8 on the American Film Institute’s 2006 list of America’s 100 most inspiring movies (which is actually a pretty good list of films worth watching).

The film will start at around 9.30pm on Fortune Green, but I’d suggest turning up from about 8.30pm with a picnic.

What have I missed since July 9th? Business network holds open brunch