Camden’s proposed 20mph speed limit on all its roads certainly got ample press coverage when it was announced a couple of weeks ago. [update: you can see Camden’s presentation on the issue] 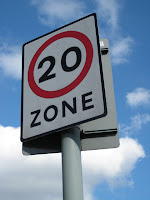 It’s not a new idea, it was actually being mooted back in 2004. Nor is Camden the first place to make such a move. Neighbouring borough Islington has just implemented such a scheme.

It’s predominantly a safety issue, and some of the borough’s side streets already have a 20mph limit after the last Camden administration voted to expand the go-slow zone. The new rules would not apply to roads in the borough run by TfL (such as Finchley Road), although there could be some lobbying to have the limit applied borough-wide.

Cllr Phil Jones, cabinet member for sustainability, explained the thinking behind the proposal to the Ham & High: “Introducing a 20mph borough-wide limit in Camden would prevent road casualties and make our streets safer for all. We want to give greater confidence to the pedestrians and cyclists who use our roads and encourage more people to switch to sustainable forms of transport.”

There’s a school of thought that says it’s unusual to travel at more than 20mph anyway on Camden’s generally congested roads – at least during the daytime – so would imposing a limit have any impact on accidents? As a couple of people mention in this BBC report, drivers are having accidents and close shaves with cyclists at 20mph already. However, in the CNJ, the council cites TfL statistics that there has been a more than 20 percent fall in accidents in Belsize Park, which has been under a 20mph zone since 2006.

Naturally, not everyone is keen. Keith Peat, the regional co-ordinating manager for campaigning non-profit group, the Association of British Drivers, was reported in the CNJ as saying the move was “counter productive”. He continued, “In congested areas, 20mph zones often have drivers more focused on the speedometer so they don’t get a fine than, say, keeping an eye out if a child runs across their path.”

Away from the busier southern reaches of the borough, however, there are plenty of stretches of road where 20mph is more than feasible (even if it sometimes feels as if West End Lane is at a permanent standstill), so perhaps it is around West Hampstead and Hampstead that the greatest impact might be felt, rather than in Camden Town or Kings Cross.

Enforcement, of course, is a crucial part of such a scheme’s success. Cllr Jones explains the ‘big picture’ approach he’s taking: “This is not about introducing more road humps,” he stresses, “it is about beginning to change the culture on our roads in favour of lower speeds. We will continue with small local schemes where they are supported by residents, but this is a more comprehensive proposal that would be implemented without major traffic calming measures.”

Swiss Cottage councillor Andrew Marshall wrote to the Camden New Journal with his views on the issue (he’s in favour). He recognises that not everyone will share his perspective: “The fact that 20mph zones are always going to be contentious with some should not be an excuse for inaction by the council.”

There’ll be a consultation of course, and no doubt strong views on both sides of the argument. What do you think? Is a 20mph limit enforceable on the busier roads? Will it actually have an impact on accidents?

Whampsushi – November 7th What have I missed since October 22nd?