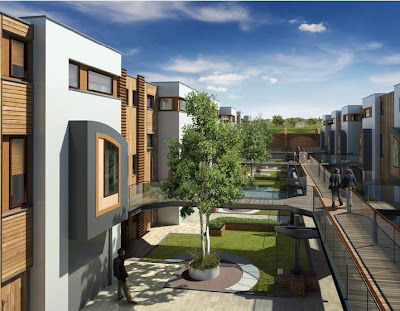 News came in late last night that the Planning Inspector (that’s a national, not a Camden position) had upheld the appeal by Linden Wates. This was after Camden rejected Linden Wates’ original 2011 proposal to develop the reservoir site into 16 houses, largely submerged beneath ground level [full planning application].

You can read more about the background to the development, the critical role played by the humble slow worm, as well as look at the developers’ second, less flamboyant proposal (also rejected by Camden).

The planning inspector’s decision draws a line under this contentious development – GARA (the Gondar and Agamemnon Residents Association), which was the driving force behind the “no” campaign, has acknowledged that there is virtually no chance of any counter-appeal and, to its credit, is now looking to the future. 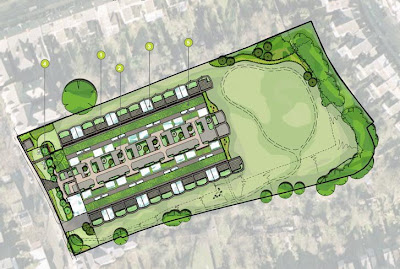 The inspector’s report is long, but worth reading if you’re interested in such things. It’s a thoughtful and detailed consideration of the merits and drawbacks of the proposal, and explicitly recognises the challenges of balancing housing need and ecological merit, design and environmental impact, and planning policies that do – in their details – sometimes clash. Naturally, the conclusion won’t please everyone, and it’s certainly a shame that a gated community will result.

Here are the key sections:

Para 6. The appeal is allowed and planning permission is granted for the redevelopment of the existing reservoir structure to provide 16 residential units, associated parking, refuse storage and landscaping, and use of the surrounding land and rear of the site for open space (nature reserve) at Reservoir site, Gondar Gardens, London NW6 1QG in accordance with the terms of the application, Ref: 2011/0395/P, dated 24 January
2011, and the plans submitted with it, subject to the conditions included in the
schedule at the end of this decision.

Para 7. I consider there are 5 main issues in this case. They are:
(i) the effect of the proposed development on the character and appearance of the site and its surrounding area;
(ii) the ecological impact of the proposal;
(iii) the structural condition of the redundant reservoir;
(iv) the form and content of the proposal in relation to:
– the provision of affordable housing,
– the density and mix of the proposed dwellings, and
– the design of the scheme within its townscape context;
and, if necessary;
(v) whether the project justifies the obligations cited above taking account of the contents of Regulation 122 of the Community Infrastructure Regulations 2010.

Character and appearance
Para 15. …The reservoir structure constituted previously developed land within the
terms of the definition now included in Annex 2 of the NPPF. The area surrounding the reservoir falls within its curtilage and, as a result of the definition, it too forms previously developed land. Although the presumption in favour of the redevelopment of previously developed land in preference to the development of greenfield land is not now as pervasive, it is nevertheless retained in paragraph 17 of the NPPF as one of the core planning principles. My predecessor referred in this context to the urgent need to find more sites for housing development, but, in accordance with the principle, the preference for redevelopment has to be tempered if the site concerned is of high environmental value.

Para 16. I am in no doubt that such value can be derived from both the ecological value of a site within its own terms, and/or from the contribution which it might make to amenity in the broadest sense – including residential amenity. In this context my colleague referred to the extensive views into the site from the surrounding houses. Although taken individually these are private views, they amount collectively to a considerable public asset and a ‘green lung’ providing local amenity. I agree with this description and assessment. Having further discussed the ecological interest of the land, he recommended the land should remain in the Schedule to the UDP as private open space (as well as being designated as a Site of Nature Conservation Interest – SINC).

Para 17. This protection is now expressed in Policy CS15 of the Camden Core Strategy 2010. The plan recognises that open space can fall into 2 categories: that which is open to the public (and which can provide for sport and recreation), and private open space – to which there is no or limited public access (such as, for example, railway embankments). The appeal site falls into the latter category and the first purpose of the policy is that such spaces will be protected.


Ecology
Para 24. The site was the subject of 30 ecological surveys in 2008-10, but was found to include only a low number of slow worms. There was agreement between the parties that the reservoir roof itself would not constitute a particularly attractive location for the species, but the south and east sides of the land are considered highly suitable. It was acknowledged at the inquiry that slow worms would readily travel between the site and adjacent gardens where they would be likely to find suitable features for hibernating, foraging and basking opportunities.

Para 28. …Subject to the implementation of an appropriate scheme and the regulation of access, I am unconvinced that the slow worms would be adversely affected by the scheme as a whole – rather the reverse.

Para 32. …On the basis of the evidence I have received in this case, for example, the surrounding domestic gardens appear to make a greater contribution to the nature conservation interest of the area than the reservoir roof – even though the former do not fall within the SINC and the latter does.

Para 33. …I consider the ecological interest of the site as a whole would be enhanced and improved and that in this respect the limited harm identified under the first main issue [character and apperance] would be outweighed.

Affordable housing
Para 45. I see little prospect that market housing on the land could ever be used to generate on-site affordable housing. I therefore conclude in relation to this issue that the appellant is justified in seeking to take advantage (by making a payment-in-lieu) of the exception included in Policy DP3 and paragraph 3.74 of The London Plan.

On the issue of the reservoir structure itself, the inspector says he considers “the debate over the condition of the structure to have been peripheral to the determination of the appeal.”

Much of the Section 106 agreements had already been settled, but it’s interesting to see the total sum the developers will have to stump up. This is in addition to the payment of £6.8 million in lieu of affordable housing, which the inspector agreed was not feasible on the site (it will now go towards housing elsewhere in the borough). And also in addition to the costs of looking after those slow worms!

In an e-mail to GARA memebers, chairman David Yass, who campaigned vigorously against the development, said “This comes as a huge disappointment”, while another member summed it up with “gutted.” GARA has undoubtedly helped improve the plan, and helped secure some significant conditions that should help minimise the impact of the development on local residents and wildlife, during and after construction.

What have I missed since October 29th? 163 Iverson Road – still waiting to start the build