The proposal to redevelop the garden centre site on Iverson Road into flats was given the green light back in the early summer but for some reason I never actually wrote about it. 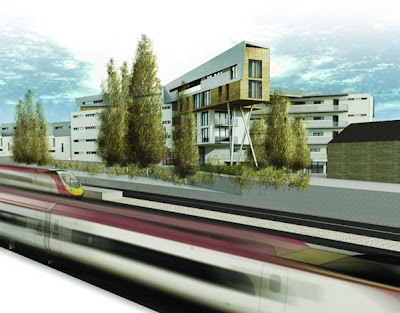 I did discuss the plans back in January, after they had been watered down slightly from an initially very ambitious “aeroplane wing” style development.

The block will, when complete, consist of 33 flat and 3 houses. Even with the revisions, it’s not to everyone’s taste. The architects though are (naturally enough) proud of their response to what is a slightly unusually shaped site.

“Dexter Moren Associates have responded to this challenging Y-shaped site by creating two distinctive architectural treatments for the front and rear of the scheme. The southern wing adjacent to the railway tracks is raised on stilts to create a series of ‘tree houses’ and to distance the apartments from the trains. This allows the greenery from the embankment to flow under, into the heart of the development. The ‘tree houses’ are topped with a folded wing shaped metal roof that acts as a protective skin from the trains and creates a striking and dynamic roof form. The main frontage along Iverson Road is designed to respond to the streetscape with boxed balconies, roof terraces and a living green wall.”

It will also be very handy for the farmers’ market.

Gondar Gardens will be developed Call for raffle prizes