Just after 8.30pm on Saturday, the 83-year-old driver of an old Mercedes on West End Lane lost control, mounted the curb, hit two female pedestrians, some traffic lights and a wall. One of the women died. Desreen Brooks, 33, was a mother from south London. The other woman is 23 year-old Amy Werner, an American postgraduate student at University of Westminster, originally from Vermont in New England. She is in a serious condition and her parents Richard and Regina Werner have flown over to be with her. The driver was hospitalised though his injuries are not believed to be serious. Eye-witnesses and local residents reported distressing scenes of medical teams attempting resuscitation, and a lot of damage.

It is still too early to know exactly how this happened. The accident occurred between the junctions with Dynham Road and Cleve Road in West Hampstead. The car was apparently heading south when it lost control. It is unclear how fast it was travelling – apparently knocking over traffic lights is not much of an indication as they are not deeply embedded. However, the car continued into the wall, knocking down one pillar entirely and causing the top of another to fall off. The car carried on a bit further, knocking down another bollard before finally coming to a stop. I do not know where exactly the pedestrians were. According to the Brent & Kilburn Times, no arrests have been made although that’s not apparently what a local vicar told his congregation – perhaps also pre-emptively saying it was a case of reckless driving.

According to a local resident, “The sound of the crash was horrific, with people rushing up Dynham Road and West End Lane to see what had happened. I did not hear any tires screeching – just the crash.  Ambulance crews were there in minutes. There was steam and dust everywhere at the scene. The immediate scenes of panic were shocking to see and hear. The car had come to rest head-on to the wall on Dynham Road at the junction of West End Lane. The driver was trapped in the car but seemed to be OK. Fire crews had to cut him out.”

According to the Evening Standard’s report, there was also a young child of 4 or 5 in the car, though it is not clear whether there were any other passengers.

The car was removed just before 3am Sunday.

I’m told there is a CCTV camera outside St James’ Mansions, so there may be some footage from that to help police. The lack of screeching tires, the age of the car and the driver and the extent of the damage done might lead one to suspect brake failure more than dangerous driving. Whatever the cause, it’s a tragedy that one local described as “the worst accident I’ve seen on West End Lane in all my 18 years living in West Hampstead”.

Witnesses or anyone with information is urged to call investigation unit on (0208) 842 1817.
Many of you have asked what we can do to help the families of the victims. In the short-term, the Family Liaison Officer is aware of this goodwill and will contact me if there is anything either family needs that we can help with. 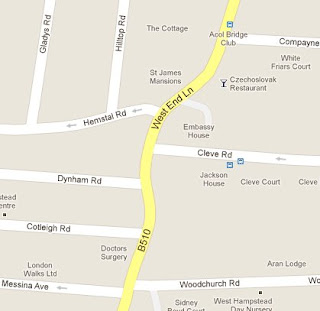