West Hampstead’s Mill Lane Bistro is unashamedly French, and the new menu has, if anything, gone even further down that autoroute. Frogs legs, snails and boeuf bourguignon all appear along with other bistro classics such as steak with dauphinoise potatoes. So is it France profonde, or Riviera rip-off?

Last Thursday, 32 of us took the place over to road test the menu for #whampreview, and – more importantly – have a convivial night of good chat over some wine. A healthy mix of familiar faces and whampvirgins gathered in The Black Lion before we braved the cold and trotted round the corner to be greeted by Cyril Blaret and his team. 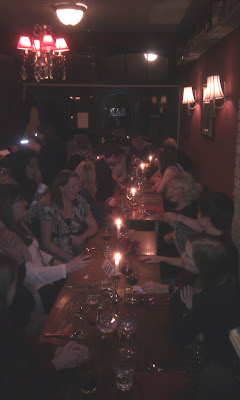 We filled the main part of the restaurant and it was loud and warm and cosy in there. Mismatched tables had been put together, adding to the rustic charm, and we got down to the serious business of ordering while staving off our hunger with some sort of cheese choux buns that were universally loved. 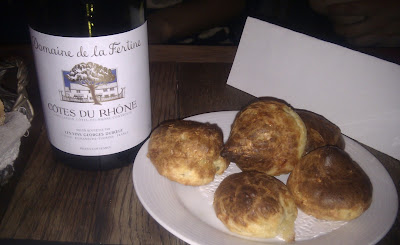 Starters: Garlic abounds
The goats cheese salad (£7) was a popular choice. “As well dressed as Paris fashion week,” said Heather. Tom thought it was well balanced and Tony agreed it had the right “tang”. There was one voice of dissent on Nimet’s table: “over-garlicky”, while Sarah thought there was just too much greenery. 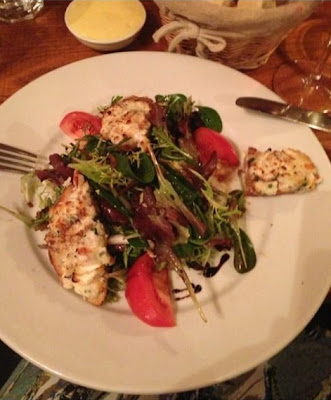 The frogs legs (£7) and snails (£7.50) were of course drenched in garlic – probably why they are so popular. Snails can be tricky to eat, can’t they, especially if you’re trying to prize them out of their non-existent shells. Cough. No names mentioned. 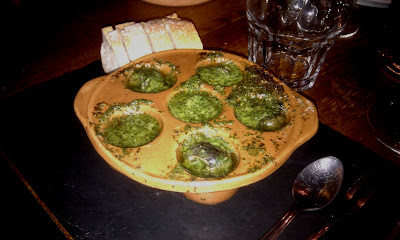 The well-seasoned rabbit terrine (£7.50) was a generous portion, although Shona speculated that it needed some sort of chutney alongside the cornichons. Matt was the only person who splashed out for the foie gras (£11), which he described as “very good and not too heavy”.

Two starters divided opinion. Nicky and Claire both thought the salmon tartare (£8) a little rich and creamy, while self-proclaimed “serious foodie” Shelley thought it was “delicious” and Nadia though the chive pesto worked well. Meanwhile, the French onion soup (£7) was deemed “good” by Nathan, who also liked the portion size, but Dexter was far less impressed and someone else said it was average.

The charcuterie board (£9.50) was a hit – hard to go wrong with loads of meat! My own tomato salad (£7) was better than I had expected with no single ingredient dominating.

Main courses: Hearty and rustic
Three of Sam’s table went for the ribeye steak (£18), and all gave it the thumbs up. On my table, Matt polished his off with aplomb while ranting about cheesey chips at Tasty Kebab on the Kilburn High Road. Steak was a popular choice on Nimet’s table too, and the accompanying dauphinoise went down a treat with everyone except Natasha who thought they could have been creamier. Everyone commented on the fact that the same distinctive salad dressing cropped up in both starter and main course salads. That’s forgivable at Little Bay prices, but here i think expectations were higher.

The oddly named “Vegetarian-style shepherd’s pie” (£14) intrigued more than excited. “Does it contain traces of uniquorn?” quipped Anna. She enjoyed it anyway, while Heather was a bit underwhelmed with hers. Nathan said his was “really tasty”. The other vegetarian main was risotto (£13), which came in for the most criticism “too cheesey, very salty and too liquidy,” said Dexter – the only person who had it.

The duck breast (£16) was described as “quacking” by Sam’s table, who were clearly having some sort of pun contest (honestly, I’m sparing you some of them). All three plates of duck on Tom’s table received lavish praise – “well cooked” and “good sauce”. Rosie described hers as “absolutely stunning.” 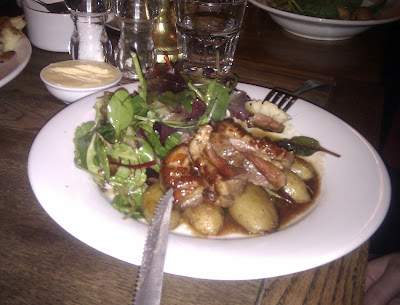 Rabbit in mustard sauce (£15) is one of my absolute favourite classic French dishes and was a popular choice. The rabbit was well cooked – it is prone to drying out – but the sauce lacked the mustard punch that I’d been hoping for. Sam and Nicky both thought it was too salty, while Claire described the baby spinach leaves hiding the rabbit as like a canopy of trees. 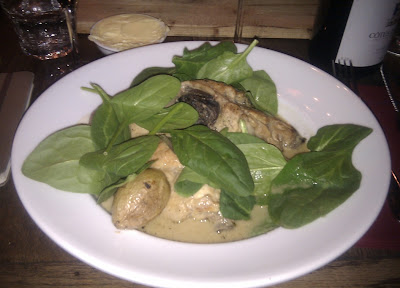 On a cold night, I thought the boeuf bourguignon (£15) might be a bigger hit, but only a couple of people chose this rustic dish. Not rustic enough for Sarah, but one of Nimet’s table described it as “very hearty and warming”. Tom agreed it was “hearty and satisfying”, and was delighted his side of greens were cooked in butter. The poached chicken (£15) received what must be the ultimate compliment: “grandmotherly” (not a compliment if you’d been cooked for by my grandmother, I have to say) and Eugene – still craving meat after his charcuterie board – was pleased with his. 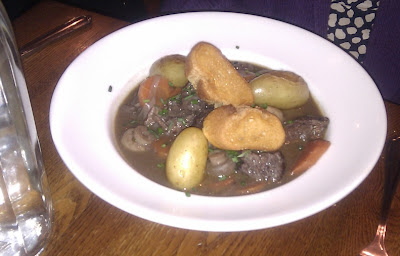 The sea trout with blackberries (£15) sounded the oddest dish on the menu, and the one person who had it said the flavours didn’t go together (although she still ate it all!). The roast cod (£16) was “tender”. Moules marinières (£13) didn’t disappoint and both Shona and Dom admitted it was a “safe choice”. 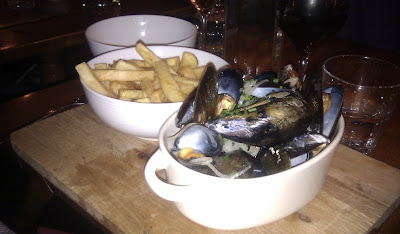 Desserts: Reaching the climax
The final course was the undoubted success of the evening. The chocolate and berry tart (the tart of the day £6.50) was deemed “incroyable”, Tom was still talking about his a day or two later. 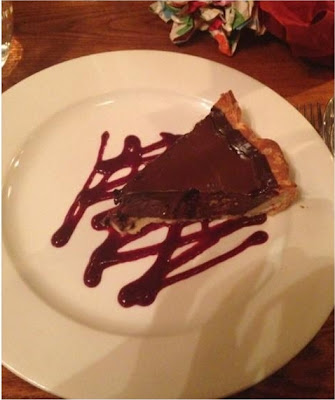 The tarte tatin (£6.50) – or “Tatatain” as Gregg Wallace calls it – was deemed a “tart for everyday” by Jo, “a highlight” by Karen, and “superb” by James. Dom was less excited, saying his was a little bland.

Crème brûlée was another hit. Rosie had a FRO (food-related orgasm) over hers, which was a bit disconcerting for Matt sitting opposite her and me next to her. He and I both had the profiteroles (£6.50) – mine with a birthday candle in, which was rather sweet and unexpected – which were good, “extra points for ice cream inside,” said Matt. “The nuts are not allowed though.” He’s wrong about the nuts.

Ged and Anna said they’d come back purely for the chocolate fondant (£6.50), while Sarah just scooped out the middle of hers. Claire, however, said it was a “NoFRO” for her. Sam’s Café gourmand (£7) proved what every customer knows, but too many restaurants have yet to grasp: you can’t serve ice cream on a slate.

History does not record what Tom’s table had for dessert, which translates as “Tom had had too much wine by then to take notes”.

Wine
For reds, everyone had either the Merlot (£16.50) or the Côtes du Rhone (£20) – the latter described by someone as having notes of a 19th century French library. The Sauvignon Blanc house white (£16.50) and the Marsanne (£17.50) both seemed popular for the whites. The wine list is a sensible length with plenty of choice and Cyril is very happy to help you choose.

The bills came to £40 a head or more on each table I believe.

Overall, it was a fantastic evening with some real culinary highlights: the duck and the chocolate tart being the stand-out dishes. The risotto was the only flop, although some dishes underwhelmed. Everyone heaped praise on the service and atmosphere. One table described it as “good value overall”, while others felt it was a little overpriced. This is a new menu, stripped down in terms of style of dish, and the kitchen may still be coming to terms with some of the plates. I got the impression that almost everyone would happily come back to give it another go. Mill Lane Bistro is certainly a major player in the local restaurant market – it sits up there with The Wet Fish Café and The Black Lion in terms of price, but offers very different food and atmosphere to both. I wouldn’t hesitate to recommend it.

Photos courtesy of Rachel (@rach_1511) and me
Thanks to Sam, Tom and Nimet for hosting tables