You may recall the recent consultation from Camden regarding the proposal to sell off small sites in order to raise capital. One of these was behind West Hampstead library on Inglewood Road.

According to our local councillors, three-quarters of people who commented objected to the proposal to sell it off, but it will go before the cabinet meeting next month with the council recommending approval. 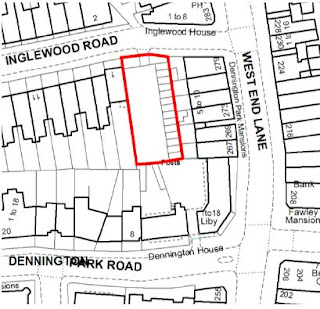 The councillors have raised four specific issues (although I’m lumping three of them together because they are so interrelated):

Cumulative Impact / Housing / Alternative uses – the concern here is that this site has not been included on any of the development plans and the constant infill of land with housing “will have an adverse impact on local services”. I wonder whether the challenge here is not one of development but manner of development. We all know that housing is a priority (as is space for employment), but the idea of cramming in apartments that barely conform to building regulations (as I believe has been suggested by one developer) is clearly not the right solution. This plot has an excellent location in the heart of West Hampstead, but is not an ideal site given its narrow shape, hemmed in on all sides. The councillors suggest, and it seems a reasonable idea, that the plot should be given B1 commercial status so it could be used for small businesses. Lets see some imagination on the part of the council in what they’d like to see here, and then encourage the right sort of bidders.

Parking – a more legitimate concern as the site now has lock-ups, so the people who use those and the outdoor parking spaces will lose them. Apparently, no alternative parking has been offered. Parking is a controversial issue in the area with local businesses wanting more to encourage visitors, while residents generally seem to favour less traffic and insist that the public transport links here are good enough for people to be able to leave their cars at home. Nevertheless, to actively lose a garage or parking space is clearly massively inconvenient.

Lets see whether the councillors have been persuasive enough or whether the site simply goes to the highest bidder.