I started this article this morning with “Newer residents might find this a peculiar topic…”. By this evening, newer residents were suddenly all too aware of the flood risk in West Hampstead as West End Lane was transformed into a river after a pipe apparently burst. [update: here’s the latest on the impact on Wednesday morning: http://www.westhampsteadlife.com/2013/02/water-out-most-of-day-road-closed-until-0043.html]

Pipes burst all the time of course, but the water is supposed to drain away eventually. The challenge is that with so much hard surface and drains and gullies getting blocked by debris, and in the case of Blackburn Road tonight, mud from the construction site, this water has nowhere to go. This is when we see the fire engines getting involved, pumping water off the streets.

Move away from a single burst pipe to a rainstorm that drenches a much wider area and it’s clear that West Hampstead could have a problem.

There have been two major flood events in West Hampstead in the last 40 years: 1975 and 2002. Both of these were caused not by a burst pipe, or even the sort of relentless winter rain we’ve got at the moment but by freak summer storms. The risk is more to do with surface runoff and blocked drains than a rising water table.

As chance would have it, just yesterday Camden launched a consultation on flood strategy. Nick Humfrey, from the council, was on hand at last night’s Area Action Group meeting to explain more about it.

After the 2002 flood, Thames Water invested in a large flood risk project in the area, known as the Sumatra Road scheme. This increased sewer capacity and added a holding tank and flood risk has reduced as a result.Nevertheless, two particular areas have been designated as potential flood risk locations: Cannon Hill and Goldhurst Terrace.

“While we have been able to develop a strong understanding of the flood risk in the borough through our modelling, records and the knowledge of our staff, there is always more information we can use and we’re keen to hear from you about areas in your neighbourhood which flood regularly or actions that have been taken which have had an impact on flood risk.

We are also interested in hearing your views on the proposed plans for managing and alleviating flood risk. While the plans are still at an early stage and the strategy is not able to go into detail for specific schemes, we’re very keen to hear of any issues that will need to be considered when the detail for these schemes is delivered.” 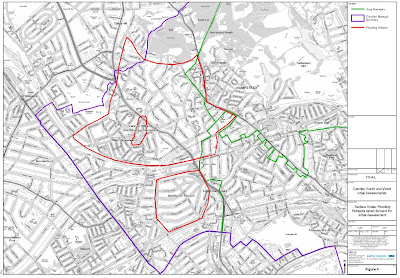 The whole draft plan can be downloaded here and below is the map of Camden showing streets that have suffered from flooding in the past. 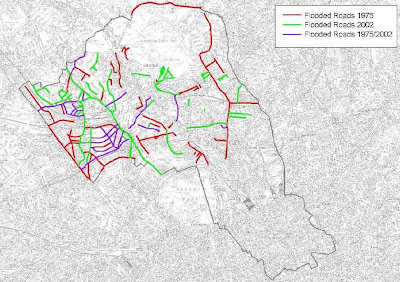 If Nick thought he was in for a quick Q&A session last night he was sorely mistaken. Local residents had plenty to say about this topic – many with damp memories of both these previous major floods as well as smaller incidents.

The two biggest concerns were – aptly enough – the council’s clearing of street gullies, and the ever-thorny issue of the impact of the increase in basement excavations. The gullies are meant to be cleared around once a year, but locals claimed there were gullies that hadn’t been cleared in years. As for basements, this is becoming a major issue all over Camden – and beyond. Planning permission needs to be sought for such work, but it seems to be granted usually. The challenge may be that too many basements in one street or one area could mean that drainage is compromised causing localised flooding. There are many anecdotal examples of this. Surveys are required for each basement, but the cumulative impact seems to be proving harder for planners to prove or act on. One indignant woman last night seemed simply stunned that Camden could allow swimming pools in basements. I haven’t heard of too many of those in West Hampstead myself – such ironic development is surely confined to our NW3 neighbours up on the hill.

Anyway, if you have any thoughts on local flooding or have been the victim of even a minor flood event in your back garden or street, do fill in the survey. The more data Camden has, the more accurately it can model flood risk and then the flood relief measures it needs to implement will be as effective as possible.

What have I missed since February 4th? Water out most of day, road closed until weekend?