Kilburn High Road has developed a reputation for dangerous junctions: there have been more than 100  accidents over the past couple of years. At the last Area Action Group meeting for Kilburn ward, Brian Deegan and Jacqueline Saunders from Camden Council’s Transport Strategy team gave a presentation on transport improvements in the area Kilburn.

Thanks to Nick Kimber at Camden for these notes:

Jacqueline explained that Camden was working with Brent to deliver area improvements and discussed how funding for improvements came from the Local Implementation Plan. She also said that Kilburn had been highlighted as a key area for investment. Camden would like to reduce the number of collisions and road danger and improve accessibility; Jacqueline also stressed that it was important to improve the character of the area and establish a sense of place.

Brian asked residents to think about routes they would like to improve in the area and highlighted Kilburn High Road, West End Lane and Abbey Road as areas of particular concern.

Residents responded that Quex Road was a particularly difficult road to cross and was heavily congested, and that illegal parking was causing problems on Belsize Road and Willesden Lane. Brian showed how clustered the locations of collisions in the area were – note that the high road isn’t “highlighted” in the map, those are all separate accidents. 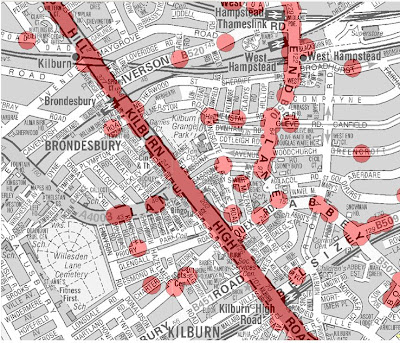 This showed a persistent problem along the whole of the High Road [it also shows that West End Lane is also relatively dangerous], indicating that junction fixes at specific locations would not resolve the underlying issue. Over the past three years, 151 collisions have been recorded and residents were keen to stress that there had been two fatalities in the past six months alone.

Residents then spoke about the issues they had encountered with Kilburn High Road, which included:

Brian showed an idea from Brent for a road with a central median strip and street trees and asked if  residents would support a similar scheme on Kilburn High Road. One resident said that the proposal was not practical and that the ideas had been looked at and dismissed in the past. Other residents could see the benefits of being able to cross the road in stages where they wanted too.

BD asked residents if there were any other transport issues they would like the Council to look at and the following suggestions were put forward:

Concerns were also raised about potholes and road maintenance in general and Brian confirmed that there were plans to resurface Kilburn High Road in the next year. Jacqueline pointed out that it was important to find the right balance on a street between businesses and residents.

The introduction of a controlled zone was suggested by one resident to reduce the dominance of heavy goods vehicles, which it was suggested brought little benefits to the people of Kilburn. A low emission zone could be considered as part of this controlled zone. By the end of the session Brian and Jacqueline  confirmed that Kilburn would be prioritised for funding and that officers would look into the suggestions put forward by residents to improve their area.

What have I missed since March 11th? Gloves off for Easter egg challenge