It’s nearly time for the third instalment of the monthly NW6 Film Club, and this month’s offering is a great pick! 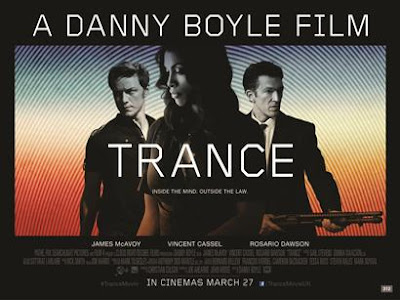 Simon (James McAvoy), a fine art auctioneer, teams up with a criminal gang to steal a Goya painting worth millions of dollars but after suffering a blow to the head during the heist he awakens to discover he has no memory of where he hid the painting. When physical threats and torture fail to produce answers, the gang’s leader Frank (Vincent Cassel) hires hypnotherapist Elizabeth Lamb (Rosario Dawson) to delve into the darkest recesses of Simon’s psyche. As Elizabeth begins to unravel Simon’s broken subconscious, the lines between truth, suggestion, and deceit begin to blur.

The film is screening at The Tricycle at 20:00 on Sunday 7th April and tickets are already available.

How do I book?
Through the Tricycle Box Office on 020 7328 1000- we have a block of seats reserved right in the middle of the cinema so mention “NW6 film club” if you want to sit with us (or don’t if you don’t!). It’s unlikely to be booked out so feel free to turn up on the night as well.

How do I find you?
We’ll meet up in the bar area at the Tricycle from 19:15, so collect your ticket and come and say hi. You’ll spot the crowd! There’s no need to tell us you’re coming – though a tweet is always welcome.

After the film we’ll go to the Black Lion opposite the cinema for a drink and a chat. The film is only 100-something minutes long so there should be time for a good post-movie discussion.

It;s going to be a great night, I hope you can join us. As always, follow @NxNW6 for updates or the #nw6filmclub hashtag.

What have I missed since March 18th? Sir Thomas Sean Connery: James Bond in Kilburn and West Hampstead