@WHampstead just found this cucumber in the bush outside our flat no joke – whose is it? pic.twitter.com/PQeONuszx1
— Alice England (@aliciaengland29) July 12, 2013

What’s going on? Are they breeding? Is this a Day of the Triffids sort of thing? 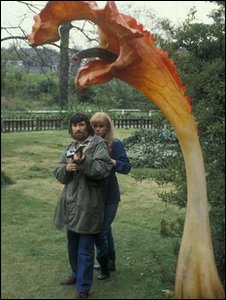 My first guess was that it was linked to the new Mexican restaurant opening where Love Food was, but as you can see in the comments below, they’ve denied this.

Then a fourth cucumber was spotted:

@WHampstead We just saw this one opposite Tesco on West End Lane! Could it be crop circles for vegetarian aliens? pic.twitter.com/LnBSw2QjLs
— J. Sager Weinstein (@jacobsw) July 14, 2013

The mystery continued. Then, on Monday, there was a sniff of a lead:

Bizarre sight of the day – a chap in a suit purposefully dropped a cucumber on the platform at West Hampstead Thameslink this a.m.!?! #odd
— Andy Gu3 (@andygu3) July 15, 2013

Where were all the cucumbers coming from? Sainsbury’s?

On Tuesday morning – it seemed the trend was taking hold – now with added spring onions.

@WHampstead what the hell … Right in the middle of the city on fenchurch street MORE cucumbers!! pic.twitter.com/KTNSNN9uP0
— mike (@mike128) July 16, 2013

After a quiet day on Wednesday with no leads, there was a sighting in Chalk Farm in the evening.

This cucumber, lying in the road, was always at risk and swiftly became just another squished vegetable statistic.

A commenter below also spotted on on the platform at Burnt Oak station that same day.

The story made the national press finally, with a short piece in the Independent which sadly confused West Hampstead with Hampstead and didn’t mention this page as the top source of all local cucumber news.

On Monday morning (23rd), Mark captured this brilliant copycat cucumber move by Gospel Oak pub The Southampton Arms. The caption gives away that this is not an original cucumber though.

The media, er, frenzy continued on Wednesday with the Telegraph covering the piece in its print edition, and adding a dash of celebrity and a woeful grasp of London geography. The BBC Paper Monitor has addressed the fact that all these journalists (who surely all live in north London?) are confusing different neighbourhoods as they report the story.

Then, as if this wasn’t excitement enough, the BBC London Breakfast show wanted to talk to me about it – luckily I was out of bed in time to get the message and had my 90 seconds of fame. Presenter Paul Ross mused that a marrow in Harrow might be next!

The very next BBC London programme was Vanessa Feltz. She brought in Geoff Martin, editor of the Ham & High, who was able to shed no more light on the mystery, despite being grilled for 10 minutes about it (ff to 2h02’19”).

Geoff claimed 40 cucumbers had been spottted, though I have no idea where this – or the 36 cited in the Telegraph – comes from. Vanessa then read out the entire Telegraph article before saying “Maybe we’ll see if we can get that guy from the blog and see if he can talk to us about it.” That would be me – the producers of these programmes clearly don’t speak to each other.

The story then spread to TV. On The Wright Stuff’s review of the papers, comedian and actor Steve Furst picked out the story, though inexplicably there was some debate as to whether it qualified as news. Clearly some mistake there. Catch it here (ff to 53’02”).

The media exposure has revealed at least one more sighting:

@WHampstead If I had heard of this story earlier I would’ve had a photo! It was at the bottom of the kentish town high street. Nr the church
— Kara (@karaseen) July 24, 2013

Thursday morning (25th) and my original suspected culprit, the soon to open Mexican restaurant, spotted a cucumber in a local West Hampstead taxi. Investigations are ongoing.

It’s been a quiet weekend (thankfully). The last sighting was on Friday:

It’s now August 5th. I’d really hoped the cucumber phenomenon had waned. TimeOut had picked the story up (though who these bloggers plural are I have no clue) but no more sightings. 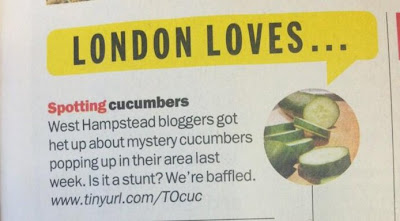 Then late last night, Marcia left a comment below and then e-mailed me the photo. The cucumber mystery continues… 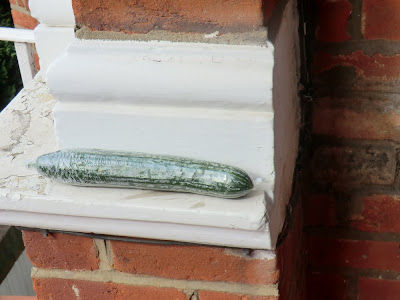 The Kids are Alright What have I missed since July 8th?