Ever since the licence application was spotted in the window of Pizza Express late last month, West Hampstead (at least on Twitter) has been abuzz with the news that Waitrose is planning to move to the neighbourhood. But what impact will another supermarket have in terms of noise and traffic, and will the fabric of the existing building be changed? 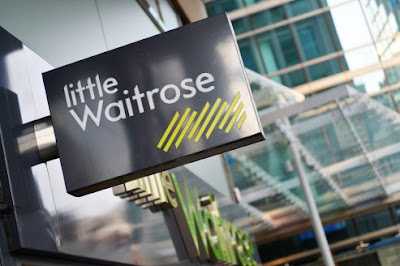 Locals’ reactions to the arrival of Waitrose have been mixed. Some have decried the appearance of yet another chain (although it’s not clear which independents are left to be wiped out), others are happy to see what is perceived as a better quality supermarket arrive, and there is a group concerned less with the corporatisation of West End Lane and more with the impact on traffic from deliveries.

@WHampstead If it is to go ahead, it would indeed be a Little Waitrose. Thanks.
— Waitrose (@waitrose) September 12, 2013

There’s the first – it will be a Little Waitrose – the chain’s relatively new small-format version. This seems likely to be the mysterious fourth 2013 opening referred to in this Waitrose press release.

Secondly, there will be no on-site parking, which had been another concern for some. The full planning application has the relevant section.

The application proposals are for some minor alterations, a roof mounted plant room to house internal plant equipment, and new signage. The shopfront would have a powder coated aluminium fascia panel and new automatic sliding doors.

The existing shopfront will be retained, including the columns which provide an attractive frontage to West End Lane. Minor alterations are proposed in order to reflect the rebranding of the premises as Little Waitrose. Overall, the works are considered to preserve and enhance the appearance and
character of the Conservation Area.

The design approach for the remainder of the site has been to limit the number of external alterations to the building. Waitrose have worked hard to design a plant system which can be accommodated internally within the building and therefore avoid the need to provide air condenser units or other plant equipment externally. The proposed small roof mounted extension to the rear pitched roof and the louvre arrangement to the side of the building will only be visible from the side (West Cottages) elevation and will respect the character and proportions of the building.

Vehicle deliveries
Given the chaos (and ill-feeling) caused by Tesco delivery lorries, which block traffic on West End Lane, it’s not surprising that Waitrose’s delivery schedule will come under very close scrutiny.

Its submissions on the topic are reassuringly detailed, but I shall endeavour to summarise for you here:

Waitrose is suggesting that deliveries could take place using the pay & display bays either side of the fire station forecourt outside of the 8am-6.30pm pay & display hours. Naturally, it would need to ensure access to those bays outside of those hours, so is proposing loading bay restrictions for 6am-8am ad 6.30pm-8.30pm Monday to Sunday. If we look at Waitrose’s own analysis of how those bays are used now at those times, we see that occupancy rates in the mornings are: 66% at the weekends, and 84% Monday-Friday. In the evening period, the bays are occupied 100% of the time. Making them loading bays – even during this short period – will therefore have an impact on local parking.

Normally, the shop would be serviced by one 14.5m long articulated lorry arriving at 6am, It would need up to an hour to unload stock and reload empty cages.At particularly busy times of the year, such as Christmas, a second articulated lorry delivery may be required between 6.30pm and 7.30pm.

All sounds reasonable so far I guess. There is a caveat here though. This Waitrose lorry wouldn’t actually be the only delivery the shop would receive. “Ancillary servicing” would include:

Waitrose argues that it dictates when these deliveries occur, and notes that all servicing activities carried out at its Highbury Corner branch are completed by 7am every day. Whether that is viable for West Hampstead will be up for debate.

In an interesting aside, the company points out that “whilst the Council has advised that they would be minded to support the use of the parking bays as a loading bay between 7am and 8pm in principle, it is clear that Waitrose only require the loading bay to be operational for four hours per day (two hours in the morning and two hours in the evening)”

If Camden did give up these two bays it would expect Waitrose to compensate it for loss of income for two years; however, given the extent to which local businesses are clamouring for more visitor parking in West Hampstead, retaining the bays seems like it would bring far more benefit to the local economy at large. It’s surprising that Camden isn’t therefore towing a harder line on this, but reassuring that Waitrose seems minded to save the bays anyway, although it still wants those four hours a day for loading. (of course with no on-site parking, these bays would also be its nearest parking spots)

Impact on traffic
That particular stretch of road is a little tight, especially with the traffic island in the way. Waitrose therefore looked at whether buses can pass each other on West End Lane while there’s a delivery lorry parked in one of the bays. The answer appears to be yes, although it does look a little tight. Still, tight is better than stuck.

The analysis shows that the bus isable to satisfactorily manoeuvre through the Zebra crossing and past a parked Waitrose lorry without affecting the crossing or encroaching the opposing traffic lane. The diagram below is a bit hard to see, but shows a pink lorry parked outside Pizza Express and a blue northbound bus moving past it while a southbound bus travels in the other lane. It’s a tight squeeze as you can see. 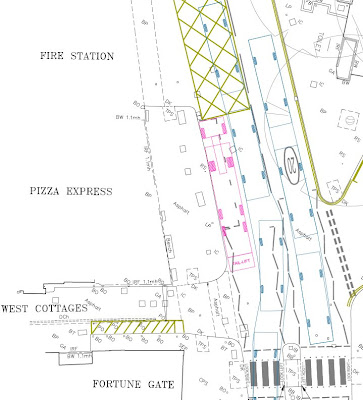 There are pages more on the delivery system for those who want to get into the detail (see Appendix A).

Noise
One of the reasons Tesco delivers during the day is because local residents objected to the idea of nighttime deliveries. Noise assessments are therefore interesting. The detail here is hard to understand for the layman (me), but the main message seems to be that although the noise from deliveries would exceed accepted levels, the ambient noise at that location already exceeds accepted levels and the additional impact of Waitrose deliveries would in fact be negligible (they argue less than is actually perceptible). In other words, West End Lane is noisy at 6.30am already, and residents won’t notice the difference.

Whether this takes into account the difference between ambient noise and the sudden jolting noise of a metal cage being wheeled off a lorry isn’t clear to me.

Opening hours
Waitrose is asking for permission to open at 7am each morning (an hour
earlier than those premises are currently permitted to open). Clearly it wants to capture the rush hour pedestrians flowing down from Mill Lane and Fortune Green towards the West Hampstead stations.

One small caveat to all this – I heard from a reliable source that the leaseholder of the building also lives in one of the flats above Pizza Express. The leaseholder has to give consent for a change of use, as I understand it, so this may not all be quite as clear cut as we imagine.