The saga of the Ballymore trees has been clogging up my inbox over the past week or so. It feels like there’s some confusion as to which trees it is exactly we’re all hell bent on saving. What’s becoming clear though, is that Network Rail is likely to be the destroyer or saviour of the trees that really matter.

In my article the other day, I focused on the trees at the westerly end of the West Hampstead Square site, which were the ones assessed as being in the healthiest condition – the ones that didn’t have to be felled.

Campaigners have (more optimistically?) also been arguing that the trees nearest the Overground station on the other side of the site should be kept. They got a reply from Ballymore’s construction manager Peter McCall, which was fairly clear on both:

“Our development will require the removal of the trees along the track side as it is extremely unlikely that the trees if left in place would be viable with the proximity of the new development.

The trees which you were most concerned about will not be affected by our development but it is our understanding that these are to be removed in conjunction with the improvement works associated with the station itself. These works will be under the control of Network Rail / LUL”

Those last two sentences are really the important ones. If we accept that the trees on the Ballymore site are doomed (I for one have no plans to chain myself to them), then perhaps it’s worth turning to the trees off the site.

What’s also interesting is that Ballymore appears to be using some of the “offsite” trees in its West Hampstead Square marketing pitch. See those trees at the top of the picture below? They would seem to be trees that are now in danger of disappearing. “A natural place to live“, says the caption, not “Panoramic view of freight trains“. 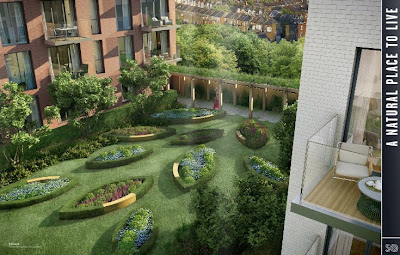 This takes us back to an entirely different conversation during one of the early public consultation meetings about this proposal. Here’s what I wrote in November 2011 following that meeting, along with an artist’s impression designed to show how the large tower blocks would be all but invisible:

“[the developers] argued that the trees that flank the site (none of which are actually on the site and thus their long-term future cannot be guaranteed) give adequate screening for the larger buildings, although the photographs that tried to prove this were taken before the leaves began to come off the trees – they said they would be taking pictures again in winter”

I’m not sure whether those winter picture ever came, and you’ll notice that even then I pointed out that as Ballymore didn’t own the trees in question, it was not really their place to guarantee their future. Bear in mind, however, that Ballymore is in partnership with Network Rail so it’s not without influence, and there is that marketing pitch to its wealthy buyers (it issued the first press release today ahead of sales formally starting this weekend – studio flats start at £405,000).

Does Ballymore really want flats that look out over train lines, or would some nice mature greenery be more in keeping with that neighbourhood vibe it’s plugging hard?

It would be fantastic if Network Rail (or whoever owns the land, which can be harder to determine than it should be) could already begin building in tree preservation, or at the very least replanting, into their plans for the redevelopment of the Overground. Here’s an area where our (up-for-election-next-year) councillors should weigh in and discuss the matter with Camden planning officers early.

As a reminder for them, there’s been a strong “green spaces” lobby at most local planning-related meetings over the past couple of years. The placeshaping document published by Camden last year says: “Existing green ‘chains’ and habitat corridors along the railway tracks and existing sites of nature conservation… are highly valued by residents and need to be protected and enhanced.”

So, who’s going to stand up for the trees? Local councillors? Camden planning officers? Ballymore? Or is it going to be down to locals to make a fuss.