Last week’s exhibition on the proposals for 153-163 Broadhurst Gardens, a.k.a. “The Mario’s block”, attracted an exceptionally high turnout. Locals are being offered a say in the type of development they prefer – though concerns about housing density and size of commercial units may be of more concern than the “modern or traditional” design question that was the focal point of the exhibition.

Why is redevelopment needed at all? The building is falling down. It was built at the end of the 19th century and has been in the same family for two generations. Despite a major internal refurbishment in the mid 1980s, shallow foundations and vibration from tube trains have caused the settling that has created the significant distortion of the building so visible today. A structural report carried out last summer concluded that fixing the structure would be prohibitively expensive.

The owners – brothers, Duncan and Nick Gilbert, both of whom have lived there themselves – run a property company that manages some 50 flats across north-west London and accept that a rebuild is the only option.

The structural problems have also meant that it’s proved impossible to let the commercial space on the ground floor. The endgame has been inevitable for some time – the bulding will have to be knocked down and rebuilt. But rebuilt as what?

Squeezing in the people
Today, there are 19 flats in the block and as well as the sad-looking empty Mario’s restaurant, and a few other unused or underused commercial spaces. The plan, whichever frontage is chosen, is to turn those 19 flats into 39 flats. This, one feels, may be a sticking point for Camden – these are going to be small flats. On the basis of the current plans, the smallest 1-bedroom flat is 45 sq m, the largest go up to 55.6 sq m. The 2-beds range from 70-72 sq m. To give you a comparison, if you’ve looked at Ballymore’s West Hampstead Square, the one-beds are very similar, but Ballymore’s two-beds are slightly larger. The Broadhurst development also offers one three-bed flat.

Some share of this would be affordable housing, though how many flats would qualify for this remains to be decided.

The Council wants to encourage developments with high densities in the most accessible parts of the borough (… and the town centres of… West Hampstead)… Such schemes should be of excellent design quality and sensitively consider the amenity of occupiers and neighbours and the character and built form of their surroundings, particularly in conservation areas. Good design can increase density while protecting and enhancing the character of an area.

All the flats would be rented out and managed by the developers’ property company, so none would be on the open sales market.

The plans at the moment show two commercial units – the corner unit where Mario’s is looks like it would be extended slightly, with the other units would be merged into one. 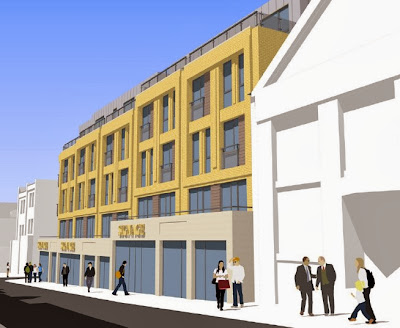 It will be interesting to see whether Camden takes this opportunity to reflect both its own Core Strategy document. This points out that “there is a lack of high quality premises suitable for small business, particularly those less than 100 sq m”, as well as the NDF’s latest draft policy recommendation, which encourages “The provision of a range of different sized units, particularly smaller spaces for micro-businesses and studio space.”

In this context, it’s possible to imagine Camden accepting one larger premises – the expanded Mario’s site – but then suggesting that the other commercial site is broken into two (at the moment the smaller site has 164 sq m of space spread over the lower ground and ground floors).

Grand design
Enough about the inside, what about the outside? The building falls within the South Hampstead conservation area, though this doesn’t actively prohibit any particular design. The architects’ options are for a “traditional” look and feel, which would not be so different from what is there today, or for a more contemporary look. The latter also offers balcony space to the top floor and corner flats. In both versions, the red brick of today would be replaced with London Stock, which is a yellowish brick also common in the area. The opposite side of Broadhurst Gardens is built of London Stock, as is The Railway pub so it’s hardly out-of-keeping with the area, although it would clash with the ENO building next door and the red brick of West Hampstead mews.

There’s no particular height issue – the proposals add one extra storey [Ed: fair point made in comments, that it’s two extra floors, though total height change is equivalent to one extra floor], set back slightly, which would be in keeping with the building across the road. This would slightly affect the view from some of the flats in West Hampstead Mews, but it’s hard to see that being a major hurdle. This certainly isn’t going to be yet another high-rise.

Camden planners are favouring the more contemporary design (the architects seemed pleasantly surprised, telling me that most councils default to traditional design). My initial reaction was to favour the traditional because the street has no modern elements in it at all. There are a couple of low-level modern conversions in the mews, but otherwise it’s a traditional brick street. Without context, I prefer the more open-feel of the contemporary design, but I wonder whether it would be jarring, especially as the building abuts the former Decca Studios/ENO building so closely. 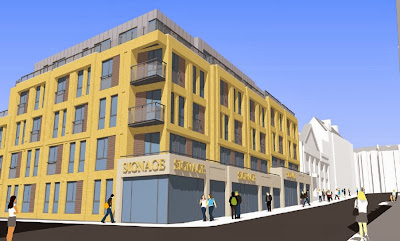 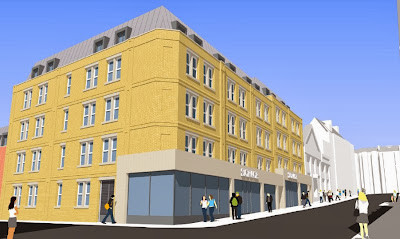 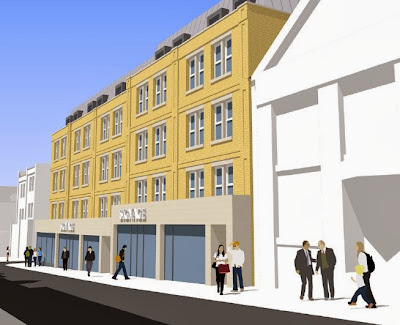 No plans have been submitted to Camden yet and, assuming all went smoothly, work wouldn’t start until 2015. This should give existing tenants time to see out their leases and find somewhere else to live. At least one tenant, who has lived in the building for nine years, only found out on the day of the exhibition that demolition was planned. Duncan Gilbert told me that they’d put up posters on the windows of the commercial units and put leaflets throught the communal letterboxes of the flats; one fears those might have gone the way of most leaflets through letterboxes.

View a PDF of the full set of exhibition boards.

What have I missed since October 21st?