Many words will be written over the next few days about Nobel prize-winning and West Hampstead-dwelling Doris Lessing, but I’d like to mention a short story of hers with a very strong West Hampstead connection. 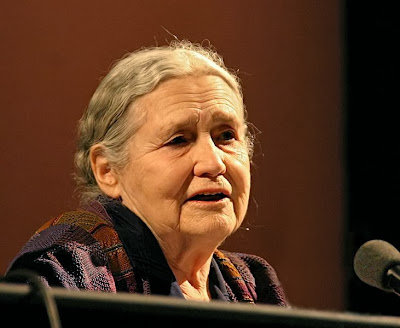 “The New Café” is one of the short stories in the collection “London Observed”, published in 1992 – for more on the collection see: http://www.dorislessing.org/london.html.

The story was set in what was at the time the first of the new waves of cafés in West End Lane. Hard to imagine now, but around 25 years ago the arrival of Dominique’s café in West End Lane marked the start of a new era and was greeted with great excitement.

The West End Lane Dominique’s, an Iranian family business, closed several years ago and was replaced by J’s, which in turn has transmuted into Bella Luna. But Dominique’s lives on not only in Doris Lessing’s short story, where the café becomes Stephanie’s and the Iranians turn into Greeks, but also in its sister café on South End Green. And of course in the memories of those of us who were living in West Hampstead when “The New Café” was the place to go.