As London commemorates the 70th anniversary of the Blitz, I thought I’d take a look at how West Hampstead fared during the war. There are tales of amazing rescues, tragic stories of wedding parties, and some explanation for the streetscape we all inhabit today.

The old borough of Hampstead was not as affected as badly as some parts of London as it had no major military targets. Nevertheless, more than 200 people died in the borough as a result of bombing. The density of the railway lines around here probably contributed to some of the munitions that fell in NW6, a tiny number of which are mapped below.

West Hampstead itself escaped widespread damage, and large-scale rebuilding was not needed. Indeed, much of the 19th and early 20th century character of the area remained intact. But that is not to say that life was easy for residents during the two main periods of bombing raids: 1940/41 and 1944/45.

The first bomb to fall in the area hit Birchington Road at the end of August 1940, but the first serious damage in West Hampstead happened a couple of weeks later. The sirens sounded at 10pm on September 18th, and in the early hours of the 19th seven bombs fell between Mill Lane and Sumatra Road killing 19 people. In a macabre conicidence, 19 was also the number of houses destroyed. These included 76–86 Sumatra Road and 9–17 Solent Road.

It was a sharp wake-up call for wartime whampers many of whom – like people across the country – were only starting to believe that the war was ever going to be a direct threat to them.

A week later, another seven bombs struck in Broadhurst Gardens – the first strike of many for this road. Amazingly just three people died but only a few houses escaped damage. Ten days later, on October 7th, the central library on Finchley Road – now the site of the Camden Arts Centre – was badly damaged and a female warden on duty at the observation post was killed. This was a night of heavy bombing across the country. A wing of Hampstead School in Westbere Road (then Haberdashers School) was damaged; this plaque marks the event. 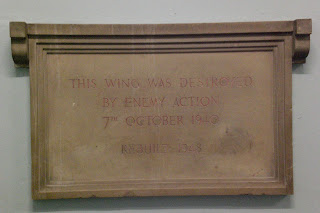 The Blitz lasted until May 1941, killing some 20,000 Londoners. Tube stations provided natural bomb shelters and Hampstead and Belsize Park were especially popular due to their depth. War artist and famous sculptor Henry Moore made some evocative sketches of people huddled together in Belsize Park tube. Residents had to get to these stations fast though as space was limited.

Swiss Cottage also served as a shelter, although initially there were no toilets and people had to take the train to Finchley Road to use facilities there. Councils began to realise that people were going to use the stations regardless so began to make them more comfortable, installing bunk beds, toilets and providing some refreshments.

Quite a community built up among the regular occupants of Swiss Cottage and they produced their own magazine called (honestly) The Swiss Cottager. There was a lobbying component to this publication. Bulletin No.2 claimed that “the installation of three-tier bunks on tube platforms would be hailed with relief by the thousands of people who nightly use the tube-station platforms as dormitories.”

The group also politely requested that shelterers refrained from bringing their own deck-chairs and suggested people were being “far too generous” with their litter.

Such doughty spirit was part of the reason Hitler turned his attention to other fronts and large-scale bombing of Britain subsided. He had failed to crush either the morale of Britons or sufficient industrial sites. Even during this lull in bombardment there was the occasional mishap: in 1943, a barrage balloon caught fire and fell onto houses on Gascony Avenue.

On Saturday February 19th, 1944 bombing began again. A bomb at the corner of West End Lane and Dennington Park Road struck a wedding party. The Camden History Society’s excellent Hampstead at War gives a full description of the explosion, which killed 10 people including two babies.

“In a flat over a butcher’s shop, a party was in progress attended by relatives and friends of the occupier’s son, a soldier who was to be married later that day. The company remained during the alert in unprotected rooms, no doubt lulled into a false sense of security by the long period of aerial inactivity. A high explosive bomb fell at ten past one in the morning demolishing the upper part of the premises over the shop… The premises were soon burning furiously and the rescuers were forced back time and time again.., The only survivor from the party was the father of the bridegroom who had left the room and gone to the rear of the house just before the bomb fell.”

That same night, eight bombs fell within 100 yards of each other at Agamemnon Road and, although only three exploded, 16 people were killed at what is now a terrace of three-storey houses built in 1952.

A few months later aerial bombardment intensified again when the V1 flying bombs entered service. Hampstead borough took 10 hits from V1s. Hampstead Town Hall was a vital observation point to track the V1s, and wardens would follow the bombs right to the point of impact – even if that was just yards from where they sat.

The first flying bomb hit a West End Lane house used as a hostel for refugees. Three houses were completely destroyed but the damage extended across five roads. Rescue efforts lasted two days and although 17 people died, a woman was found alive 48 hours after the bomb exploded.

The site was used to build Sydney Boyd Court in 1953, the large council estate that hugs the curve of West End Lane between Acol Road and Woodchurch Road.

In late June 1944, Broadhurst Gardens was struck again, at almost exactly the same point as in 1940. The following day, a building in Mortimer Crescent was hit – it was used to store furniture for people whose own houses had been destroyed. This was probably the same attack that forced author George Orwell out of his Mortimer Crescent home, where he had written Animal Farm. Further doodlebugs hit Fortune Green Road, Mill Lane (damaging an ambulance station) and Parsifal Road where a District Warden headquarters was damaged.

Broadhurst Gardens suffered yet more damage in August 1944 when a V1 fell in the gardens between Broadhurst and Compayne Gardens just 50 yards from the previous bomb. The road was the worst affected in the borough, which is why large stretches of it are occupied today with council housing.

More than 1,300 V2s fell on London (only Antwerp was targeted more) killing 2,750 people. Britain never developed effective countermeasures for these supersonic missiles. Of those 1,300 V2s only four had an impact in this area, with one causing particularly widespread damage.

Superlocal blog Northwest 6 covered wartime memories a couple of years ago. One reader, John Lewis, recalled “I was staying with my grandparents at 25 Gladys Road towards the end of WW2 when a V2 came down about 250m away in Iverson Road. I was covered in soot, dust and broken glass but unharmed.”

In 2004, the Camden New Journal printed an anecdote from Gladys Cox, who also recounted a bomb in Iverson Road. Although her account said it was in January 1944 it seems likely it was in fact the 1945 attack.

“After lunch, it stopped snowing, and as the air was invigorating we walked, or slithered in the slush, down to Iverson Road. Here, rows and rows of small houses had been blasted from back to front; doors, windows, ceilings all one. Whole families were out in the street standing beside the remains of their possessions, piled on the pavements waiting for the removal vans; heaps of rubble everywhere, pathetically showing bits of holly and Christmas decorations.”

The bomb actually fell on the railway embankment, but both sides of the railways suffered. The driver of the first rescue vehicle on the scene found one of the dead – his own 19-year-old daughter. One woman was rescued eight hours later after the rescue teams had almost given up. She was found jammed under a sink in the scullery.

Iverson Road was by far the worst affected street, but damage extended to Sheriff, Maygrove, Ariel, Loveridge and Lowfield Roads, Netherwood Street and West End Lane. Although only three people lost their life, 1,600 people required some form of assistance and 400 had to be temporarily rehoused. There’s another personal account of the attack at Northwest 6.

Seventy years later, it can all feel rather like a numbers game. So many people died, so many houses were damaged. It is impossible for most of us who have grown up in a peaceful western Europe to wrap our heads around the permanent sense of fear that must have underpinned lives for millions and millions of people across Europe during the war. The work of the civil defence organisations and rescue services should not be overlooked. They may not have received the plaudits of the fly boys in the Battle of Britain, or Monty’s Desert Rats, but their commitment to the lives of ordinary Londoners was astonishing.